The 24-foot bronze fist sits across the street from Detroit’s Hart Plaza, in the shadow of the towering Renaissance Center. At its most literal, “Monument to Joe Louis” is a tribute to the pugilistic prowess of one of history’s most noteworthy boxers: a fist suspended in the center of a steel pyramid and trailed by just enough of an arm to make it look like the world’s deadliest battering ram. In many ways, it’s the perfect symbol for the Motor City – an image of violence and kinetic energy crossed with a rich history of hard-fought racial coexistence and working-class adversity.

If this is the competition, RoboCop has his work cut out for him. 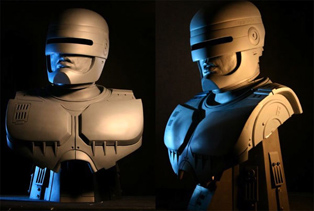 One year ago this month, a Kickstarter project hosted by Detroit nonprofit Imagination Station obliterated its $50,000 fundraising goal to build and plant a 10-foot RoboCop statue in Detroit, the city whose reputation – for better or for worse – served as the perfect backdrop for Paul Verhoeven’s classic. The plan sparked a local controversy, with opponents claiming that a city wracked by poverty and disparity could find better uses for the money (final numbers topped out at more than $67,000) than to memorialize a film that painted the city as a dystopian hellscape.

If the Joe Louis memorial sets the bar for public art in Detroit, then it’s hard to deny that a RoboCop statue falls somewhat short. Imagination Station’s Director of Development Brandon Walley doesn’t shy away from noting that the idea was born out of a love of kitsch. “I wasn’t even a huge RoboCop fan,” he says. “I hadn’t seen it in 15 years.” (He has since remedied this, several times over.) But he’ll also tell you that the kitsch doesn’t have the final word—the statue has yet to be completed, but Walley says that it is already making a positive impact.

“I saw this as being a vehicle for raising attention to more important causes,” he says. “It had enough of the pop factor in it where we said, ‘Oh, we can get a lot of exposure to do all of these other things that had been like pulling teeth before.’ You just need some ridiculousness sometimes to do other things, and I think that’s a little bit of what RoboCop did here.”

Imagination Station’s “RoboCharities” initiatives have included partnering with Forgotten Harvest, a local nonprofit that rescues perishable, surplus food and donates it to local emergency food providers, buoyed by a Funny or Die video starring RoboCop actor Peter Weller. Before long, the benefits began to trickle outward to other local organizations. Spurred in part by the RoboCop statue’s crowdfunding blitz, Kickstarter has become so ubiquitous among local non-profit organizations that the service recently called Detroit its “civic epicenter.”

In the meantime, Walley and his team have secured licensing from MGM and received the model on which the statue will be based from Fred Barton Productions. In the next few months, they hope to have completed the 3-D scans required to begin production, scheduled to take place at Detroit’s own Venus Bronze Works. The statue’s eventual location is still undecided – a planned installation on Wayne State University’s TechTown campus appears to have fallen through – but Walley is confident that RoboCop will find a safe and public home in the 313.

And while a RoboCop statue might not pack the same emotional and historical resonance as its big brother Joe Louis, Walley suggests that observers should not discount the message entirely.

“I think what RoboCop means to different people – you can kind of take it on a lot of different levels,” says Walley. “He’s ultimately about the rebirth. You can draw those parallels. I don’t live and die by that, and say ‘No, we need RoboCop as the symbol of the ultimate Good’ – but it has its place.” 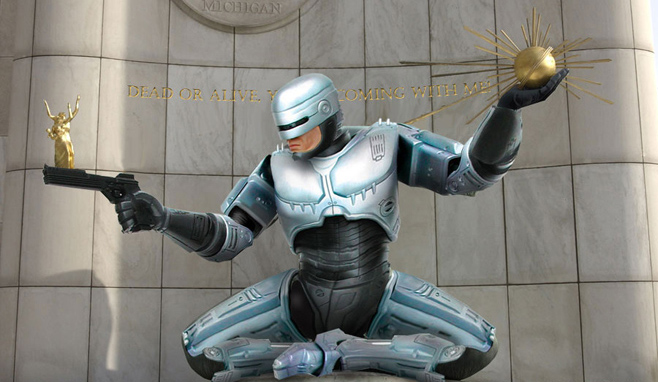