Mittens is a tabby with a ‘tude. He doesn’t like sharing toys and he doesn’t like cuddling close to his litter mates. Perhaps that is how he ended up at the Knoll Street School for Wayward Kittens, where older, wiser cats can teach him the proper way to charm the humans. Mittens has classes in all of the important subjects: maximizing the use of sunbeams, the joy of cardboard boxes, and most importantly, the control and care of his Kitten Laser Beams.

Laser Kittens, by Stentor Danielson and Cheyenne Wall-Grimes of Glittercats Fine Amusements, is a table top role playing game that asks player to contemplate a serious, perhaps unanswerable question: how can we put ourselves into the shoes of a being whose motives are so completely inscrutable that they can scarcely be comprehended?

It is also a fun, silly game about cats.

The mechanics are designed to be welcoming to beginners. You don’t even need any fancy dice to play, just a couple of decks of standard playing cards. Players are dealt a random hand of cards to spend when they interact with the environment, an NPC, or another player, but they are able to choose which card to use in each situation, meaning that the game still contains elements of both strategy and luck but without the need for complex math or endless charts and tables.

Your kitten also has a custom superpower such as the ability to control the litterbox, or to make things disappear under the fridge. These powers might help your kittens out of a jam, but they occasionally misfire in disastrous and hilarious ways.

Information about the setting (the Knoll Street School for Wayward Kittens, which is very like Professor Xavier’s School for Gifted Youngsters only, you know, for cats) and the various NPCs (humans, adult cats, dogs and other wild animals) are included in the handbook for a quick set up, and the game uses a Shared Game Master system in which the players share the responsibilities of conflict resolution.

The game also dispenses with standard RPG mechanics like experience points, replacing them with a “report card” that assesses the kittens’ progress in each of their catty classes. Each game has players working towards two lessons: a Professor Lesson, assigned by an adult cat NPC and shared by the group, and a Personal (Purrsonal??) (Editior’s Note: Meg, you are a monster) Lesson representing a weakness each unique character needs to improve. Making progress toward learning your lessons strengthens the power of your laser (aka “levels you up”).

This, combined with the easy to grasp card mechanic, and the ability 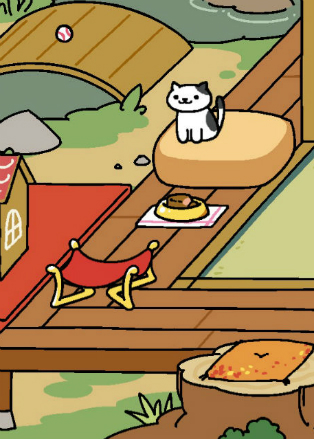 to easily cobble together a single session game makes the game extremely accessible for young children. But you can also create multi-session campaigns that are fun for adults, so long as those adults are willing to indulge in a little wackiness. My table top c
rew and I are on the way to turning our ragtag group of kittens into the dominant power of the neighborhood, which is looking more and more like the backyard cat paradise of Neko Atsume every day.

We embraced the X-men-ishness of the game by patterning our kittens on characters from Deadpool. My character, Mittens, is the cat equivalent of the Merc with a Mouth, all sass and no class, and his posse is rounded out by Chloe, modeled on the aggressively uninterested Negasonic Teenage Warhead, and Pumpkin, a goody-two-shoes who takes after Colossus. After this campaign is finished, we plan to run more games based around other famous pop culture schools: Saved by the Bell’s Bayside High? Ferris Beuller’s school in Shermer, Illinois? Rydell High from the musical Grease? Glee’s William McKinley High School? I’m having so much fun coming up with scenarios I might petition the game makers and see if they will let me craft an expansion pack.

Check it out. Perhaps you will gain insight into the mysterious minds of our kitteh overlords.

Why Aren’t You Already Following @WhoresofYore