In late 2008 and early 2009, my father was inexplicably recovering from a cancer that was, by all accounts, relentless and deadly. The people around me, friends and family, seemed to be hopeful. I think that I might have even seemed optimistic. But my outward appearance wasn’t an accurate reflection of my state of mind.

I was grateful for one last holiday season with a father who was coherent and upbeat. He read my article clips (my being a professional writer was a new and somewhat unexpected turn at that point in time). I bought him a pile of books for Christmas, including Studs Terkel’s oral history of World War II, The Good War. I know my father would have enjoyed it, but even though I gave it to him with the intention of him reading it, I knew, deep down, that he never would. My father was dying, even if no one, including myself, could admit it.

In January of 2009, I was finally finished with Fable 2 and Fallout 3. Looking for something new, I turned to Far Cry 2. I had heard that the game had problems, but I dove in anyway. The dry, hot, exotic setting was exactly what I needed that cold and miserable winter and it wound up becoming a web of escapism I could barely escape.

Josh Dysart set the stage for me with his incredible (and underappreciated) revamp of Unknown Soldier, which launched the previous October. I had already invested hours of my life reading the news wires for mentions of child soldiers and the contemptible Joseph Kony, so I was primed for a videogame that dealt with the complexities and ambiguities of a failed African nation-state.

Once I was knee-deep in Far Cry 2, I devoured anything that could extend the experience. I bought the Rachid Taha album Made in Medina so I could listen to “Barra Barra,” the song from the cinematic trailer, on repeat. I spent my downtime at work reading the game’s promotional blog (War Unlimited, by Rueben Oluwagembi) which chronicled the unnamed nation-state’s descent into chaos and civil war with surprising pathos.

And when I was home, I was a mercenary roaming the savannahs, searching for nobility in the immorality of my actions. Relatives would visit and I couldn’t tear myself away from the TV. I would hastily wolf down Chinese food dinners (the traditional Horvath meal in times of crisis) in order to get back to my AK-47. My girlfriend at the time found the whole thing repellent – it was too real, too exploitive of real suffering for her tastes. But for me, everything that made her uncomfortable was exactly what I embraced.

That simulation of Third World madness was the only thing that kept me sane as I waited for the other shoe to drop. 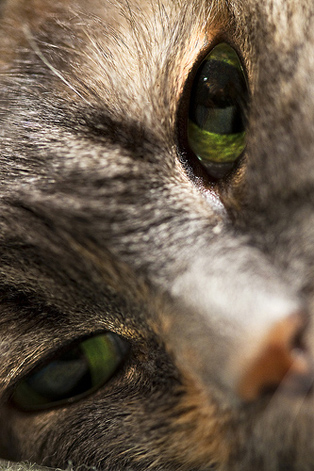 Sometime in June of 2010, my cat began to act strangely.

As cats go, she was mellow, content to sit, a puddle of gray fur, and glare at anyone who approached, walked by or otherwise disturbed her. Her name was Graymalken, ostensibly named for the cat owned by the three witches from Macbeth, but the true inspiration was Graymalk, from A Night in the Lonesome October, by Roger Zelazny.

That June, her glare turned glassy. Her sass vanished and she became inclined to disappear into dark, inaccessible corners for long stretches of time. She stopped eating. It took us longer to realize something was wrong than I care to admit, but once we figured it out, we immediately brought her to the vet. She had a tumor, a massive one, that was interfering with basically all her organs.

Fucking cancer. It had taken my aunt, my grandfather, my father. Friends of the family. Breast cancer nearly got my mother. My other grandfather died of ‘old age’ but I would bet there was some kind of quiet cancer involved. And now it got my cat. I could have screamed, if it didn’t seem so pathetically ridiculous.

That poor little creature. That’s the hardest thing about pets – they don’t understand what is going on. They can’t talk or understand language in a meaningful way. As far as Graymalken was concerned, she was tired, hungry, perhaps in pain and filled with an urge to be away from everyone in the house, but she didn’t know she was dying, not like a person would. In fact, despite being sick, she was unnervingly normal. She followed me around the house like always. She mugged for petting. She purred.

It was a special kind of torture.

One of the most interesting mechanics of Far Cry 2 is its buddy system. Over the course of the game, you have the opportunity to rescue mercenaries like yourself from the clutches of local warlords. Once you do, they will help you when you need it.

I remember it clearly. I had stumbled right into a camp of United Front for Liberation and Labour thugs. It was my own damn fault – the sun was going down and I really wanted to get back to Mike’s Bar and call it a night. I was rushing over a ridge and there they were.

Thankfully, they were as surprised as I was. It gave me the opportunity to pitch a Molotov cocktail into the tall grass and dive for cover among some trees. Unfortunately, it was just one of those nights. The wind changed and the fire, instead of converging on the UFLL camp, was blown back in my direction. It didn’t take long before I had to bail on my cover and run, desperately, up the ridge and hope that a rocky outcropping would give me enough room to not get shot full of machine gun fire.

Once I got there and ducked down, I pulled out my trusty G3KA4. There are more impressive assault rifles out there, but the G3 has descent stopping power and is fairly accurate so long as it isn’t set to full auto. I popped the switch to three-round bursts, dragged the iron site over the head of one very angry incoming UFLL thug and pulled the trigger. Nothing happened.

I pulled out my pistol and started firing blindly. I was pretty sure this was not good. A moment later, two rounds in the chest confirmed my theory. I was lying in the tall grass on the verge of blacking out when I could hear the engine of a Jeep roar onto the scene. There was the sound of gunfire and shouting and suddenly I was being picked up. Flora had come to the rescue.

There was a chance, the vet explained, that some kind of steroid injection could reduce the size of Graymalken’s tumor. I don’t really remember the particulars – we just said yes and signed the check. It didn’t work, of course. The tumor stayed the same size. She still couldn’t eat. It was time, they told me, to consider putting her to sleep.

Euthanizing a pet is the most difficult thing a pet owner can do. Intellectually, it makes perfect sense – it prevents needless suffering in a creature that is unable to otherwise be made comfortable in its last days. Emotionally, however, it feels like a betrayal. Animals trust uncynically – even when they are terrified, they expect that when their owner is around, everything is going to be all right.

It’s that lack of understanding and consent that gets me. My father’s death from cancer was a horrible thing, but at least I wasn’t complicit in it. Bringing Graymalken to the vet for the last time, she sat quietly in her cage, she sniffed around the table, she did all the things she usually did at the vet. When they injected her with the sedative, she went to sleep oblivious to the fact that she would not wake up again.

It made me feel awful. But, why then, under that wave of grief and self-loathing, was there something familiar? 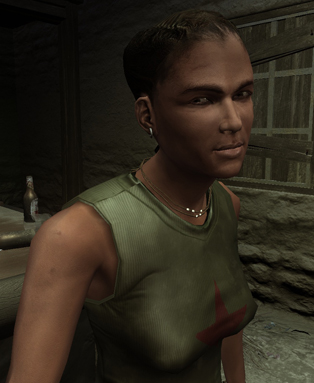 Flora dragged me to better cover and then devoted a few minutes to automatic fire. Once the UFLL had scattered, she shot me up with morphine, pulled out the bullets with her pocket knife and hastily wrapped the wounds in bandages. We were about to make a break for it when that hulking Afrikaner appeared behind her. He said something that sounded snide and fired his shotgun in the general direction of Flora’s head.

She collapsed to the ground with a sickening thud. I snatched up her AK-47 and blindly sprayed rounds at the mercenary. No second blast of the shotgun came. We were safe for the moment.

Flora and I had been through some serious situations. She was a Cuban, standoffish to strangers, loyal to her friends. How she came to be in Africa was a mystery, but we were friends, and I’d be damned if I was going to let her die here.

I pulled a morphine styrette out of my pack and stuck it right into her neck. In a couple of seconds, she would relax and I would be able to get to work hastily digging out the buckshot and sterilizing the wounds. Fifteen seconds turned to a minute, but the painkiller hadn’t taken hold. “More,” she croaked. I gave her more. Nothing happened.

Flora was dead. She didn’t know it yet, but this woman who had saved my life on three separate occasions had about 15 minutes of incredibly painful life left in her before she bled out. Now I had to decide what to give her: more morphine, or a bullet.

In some small way, Far Cry 2 was a kind of inoculation against a particular kind of grief, a preparation of sorts. It reminds me very much of a quotation near the end of the Hagakure, an 18th century commentary on bushido, which describes how a samurai should prepare himself to accept his own mortality:

“Meditation on inevitable death should be performed daily. Every day when one’s body and mind are at peace, one should meditate upon being ripped apart by arrows, rifles, spears and swords, being carried away by surging waves, being thrown into the midst of a great fire, being struck by lightning, being shaken to death by a great earthquake, falling from thousand-foot cliffs, dying of disease or committing seppuku at the death of one’s master.

“And every day without fail one should consider himself as dead.”