I first met Jordan Hembrough when I was a waiter at a small café. I made a Star Wars joke and we became fast friends. Unwinnable’s Ken Lucas and I worked with him a few times at New York Comic Con, and we had a blast. One day, Jordan mentioned that he was pitching a show to the Travel Channel about toy collecting, but we fell out of touch after I left the job.

Fast forward to New York Comic Con 2011. I literally bumped into Jordan walking around on the show room floor. We headed back to his booth and I was shocked to see the number of cameras floating around. He was at NYCC filming the pilot episode of Toy Hunters for the Travel Channel, which revolves around Jordan scouring the nation in search of rare and sought-after toys.

Ken and I recently stopped by his office for a quick interview and to check out a 5-minute clip of the show. Unlike most reality show stars with overblown, scripted personae, what you see is what you get with Jordan. His enthusiasm for collecting toys and the joy he gets out of finding that rare piece is almost contagious, reminding you of how fun it is to discover that awesome toy hiding behind an army of peg warmers.

Unwinnable: How did you get started in the toy business?

J.H.: I started as a buyer for Starlog Franchise Corp. – they were the retail division of Starlog magazine. As many know, Starlog was the ultimate source for sci-fi and entertainment back in the ’70s and ’80s. 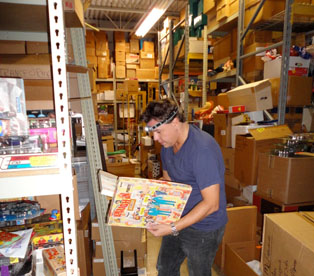 I oversaw collectible buying for over 13 worldwide stores. It was a wonderful experience and I worked with some incredible people. Truly a happy time in my career.

Unwinnable: At some point in the ’90s, toys seemed to trump comic books in terms of collectibility. Do you find that toys fans are interested in vintage toys over modern collections?

J.H.: I think fans are generally interested in what they love, whether it be vintage or modern. For many, the vintage toys are reminiscent of their childhood. So naturally, if they have a chance to own that same toy, they are going to take it.

However, I do see many collectors buying the new products as well. This could be for many reasons. Some simply like the way the newer toys are manufactured, whether it be from a durability or functionality aspect. Others appreciate that economically, it’s cheaper to purchase newer toys than the vintage ones. Collect what you love; do it for yourself and not what market trends say is hot.

Unwinnable: Outside of trade shows, do you usually take your business on the road to hunt down childhood treasures?

J.H.: I do travel a lot for buying. But with the Internet these days, it’s easier to have someone send photos via email than it is to actually travel out of state. Many of my trips are prearranged, so I basically know what I am looking at. That being said, there is still the wild card factor on every journey. You never fully know what you’re going to get. I like that.

Unwinnable: What is your favorite item that you have sold over the last 20 years?

J.H.: The original wax sculpt for the vintage Kenner Boba Fett figure. It was done so beautifully and he is such an iconic character. To be honest, it’s the one toy I regret selling, but I know it went to a good home and a devoted and loving fan!

Unwinnable: I’ve seen your booth at various shows including Comic Con and Chiller Theatre. What is your favorite show to work?

J.H.: I don’t have a favorite; I love them both. Each has its own vibe and pulse. Comic Con is such a frenetic pace – it’s nuts. You can literally speak to 50 different people in the span of 30 minutes. You are always running and doing sales. It’s what I call “shotgun selling”: Take aim, shoot, reload – on to another sale.

Chiller is more laid back and easy. The show runs until 11 p.m. the first night, and you really see people just relaxing and having a good time. Because it’s in the hotel, alcohol is permitted into the show. It’s common to see people walking around with a beer or wine in their hand. It’s like one big cocktail party, only with vampires.

Unwinnable: What can we look forward to seeing in episodes of Toy Hunters?

J.H.: Well first, we need to be picked up for a series. So it’s up to all the collectors and fans to watch the show! DVRs and other recorders don’t count for ratings, so I need butts in front of the TVs!

That being said, I hope to revisit all the favorite toy lines from the past 30 years. These childhood favorites are so much a part of our culture, they truly are timeless. Boys’ toys, girls’ toys, trains, games and more – I’ll hunt for it all!

Toy Hunters premieres Sunday, Jan 15th at 11 p.m. on the Travel Channel. Follow @jordanhembrough on Twitter for show updates and what’s new and exciting in the world of toys and collectibles. You can also visit Jordan’s site Hollywoodheroes.com. John McGuire will be tweeting live during the premiere of Toy Hunters. Follow him on Twitter @johnmiserable and be sure to watch the show LIVE!