I found out about Hasbro’s plans to release an all new Unicron toy by accident. I have this habit of checking out their shop website, Hasbro Pulse, fairly regularly and managed to stumble upon the listing before any public announcements were made (that I knew of). And wow, what a thing! It’s a supposedly 27” tall, 19-pound beast of a robot that turns into a planet complete with a stand that works for either mode, loads of articulation and claims of being “the most accurate” Unicron toy ever. And it’s going to cost $575.00. And Hasbro wants to give collectors and fans less than two months to hit the 8,000 backer goal. Here’s the thing: this all sounds utterly ridiculous in both good and bad ways, but it also sort of makes sense?

First, just a tiny bit of backstory. Unicron is basically the Transformers’ version of Satan, with a smattering of Galactus thrown in for good measure. He’s an evil planet that eats other planets, but he’s also kind of an evil god-being who can reformat his disciples into more powerful forms. He was destroyed in the original G1 film before he could eat Cybertron, he was the big looming threat in Armada, Cybertron and Energon, he was revealed to be The Big Bad (and the core of the planet Earth) in Prime and then Michael Bay copied Prime to use the same idea for The Last Knight but then not do anything with it. He also got his first retail figure in his proper planet-forming glory by way of Armada and, while the toy is impressive in its own right, it wasn’t super-duper accurate to the original G1 design and his planet mode wasn’t exactly spherical. 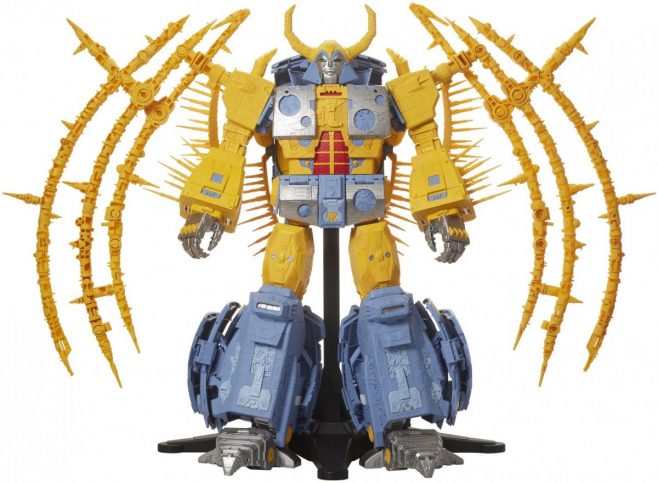 But now we have an all new, giganto-Unicron to look forward to, right?

Yes, okay, Hasbro is making an odd move (or at least an irregular one) by attempting to crowd fund the figure with 8,000 backers at $575 a pop – which equates to almost $4.6 million dollars. Thing is, I think I kind of get it? Obviously I’m not on the inside so this is purely speculative, but let’s think about this for a minute. Transformers toys are a product meant to make Hasbro money. In order to make money they need to be bankable – to appeal to kids in a store and/or collectors. Production, marketing, distribution, etc, are all costs that need to be factored in. And let’s be real, a 27” tall Unicron, what would be the largest official Transformers figure ever made, probably isn’t something we’d be seeing on a shelf at Target. This is definitely a collector-focused project. 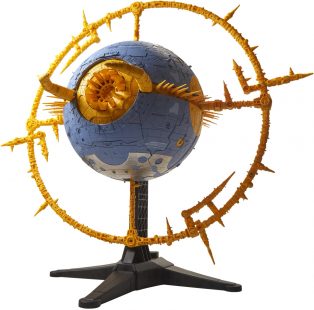 Collectors can be super fickle. Especially now that upscaled and re-engineered knockoffs are a common thing. Hasbro, as a business, really doesn’t want to spend millions of dollars developing a high-end and super niche collector’s item, then sit back and hope they recoup their costs and maybe turn a profit. They need to try to stack the deck in their favor, to try and make sure the project won’t be a financial loss. So yeah, trying to gauge interest via crowdfunding (with the added benefit of upfront sales) seems like a reasonable way to pull something like this off.

I’ve seen people poo-poo the idea because “Hasbro is just being greedy” or “this is in no way worth the money” or “I’ll wait for the knockoff.” But again, let’s be real here. This is a massive figure that stands a few inches taller than the largest third-party offerings like DX9’s Gabriel or FansToys’ Terminus Giganticus (Omega Supreme) and definitely weighs more. Gabriel weighs in at an impressive 12 pounds, but Unicron here is going to weigh 7 pounds more than that! And both of those third party examples cost close to $300 – or closer to $500 in the case of Terminus Giganticus when it was first released (in two separate parts!). I’m not saying $575 isn’t a lot to ask for a single toy, because it sure as hell is, but I do think a high cost like that makes sense when you consider the size and engineering involved. Also, it’s like $125 more than the new third iteration of Masterpiece Optimus Prime (preorders are set around $450). I mean come on. That’s way more ridiculous.

And knockoffs? Really? You think a KO company is going to somehow be able to ignore physics to create something bigger and heavier that would still be able to stand under its own weight, be able to be mailed for any sort of reasonable shipping cost, cost significantly less money and you’d actually have room for it? Haha, okay then.

Whether or not Hasbro’s plan will work is still up in the air – as of this writing the project is a little over 1/8 of the way to its goal after less than 48 hours – but their plan does make a certain amount of sense. Trying to produce the most giantest Unicron for full retail is one hell of a gamble, even with a massive fandom that spans several generations and levels of income, and anyone who gambles would take whatever chance they had to shift the odds in their favor.

Razor Blades or Fancy Pants: The Story of The Real Peaky Blinders

On Sincerity and Scheduling