Skylanders: Spyro’s Adventure is, at its core, a simple dungeon crawler designed for a younger audience. Unlike other games of its ilk, Skylanders features 32 playable characters, each represented by an action figure. Placing a figure on the game’s Portal of Power peripheral brings the character to life in the game. All stats, upgrades and gold are saved to the figure itself, making it easy to take your hero to your friend’s house and pick up where you left off. It’s a great concept, both for kids who like fun and Activision shareholders who love bathing in money.

Yes, the figures are really just physical DLC and that’s something worth getting up in arms about. However, the Skylanders figures make up the first successful toy line that doesn’t require children to actually engage their imaginations in order to enjoy them. Their in-game appearances and actions completely remove visualization from the act of playing with toys, and this has the potential to drastically affect the way that the next generation develops its imagination.

Games and movies served as visual, concrete examples of places, people, and things that could exist, and helped to kick-start my little mind.

In 1964, a Canadian scholar named Marshall McLuhan came up with the idea that “the media is the message” – simply put, it’s just as important to study the way content is delivered, and not just the content itself, to get the whole picture. He also came up with the theory of hot and cold media: all media can be ranked on a scale, from hot to cold, based on the amount of interaction required to take in its content. (Cooler media are considered lower resolution, and require more than one sense to process. Hotter media have a higher resolution, and require fewer senses to enjoy.)

Take a radio program, considered a hot medium, compared to a novel, which is decidedly cool. When you read a novel, you have to parse the text, visualize the content, and voice the characters internally in order to get the full experience. A radio program delivers the text to you audibly and gives the characters voice, leaving you with the sole task of letting the words enter your ear holes while your brain weaves the tapestry of events. 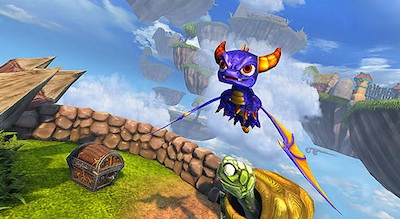 Of course, the hot/cool scale is relative and dynamic. A radio program is hotter than a novel, but a movie is much hotter than both of them, as it removes the visualization aspect entirely and requires even less effort from the viewer.

I once posited that this hot/cool scale could also apply to different pieces of content within a specific medium. Take videogames as an example. You could argue that movies are hotter than videogames, as players have to take an active role in progressing the story and action as opposed to passively letting a movie do the work for them. Regardless, games are still hotter than most media. But within the realm of videogames, there’s a drastic temperature range, from text-based adventures that require as much, if not more effort than a novel to enjoy, to QT-laden titles like Asura’s Wrath that require little player input to advance.

Every medium, including toys, has its own internal scale. Back in the early 1900s, when dinosaurs and great-grandfathers roamed the earth, toys were simple. A wooden horse came with no personality or poseability. It was up to you, the participating child, to move the horse around, make neighing sounds, and decide what kind of horse it was. In the 1960s, Action Man figures, though lacking backstory, were detailed enough to take some of the load off of children’s imaginations. 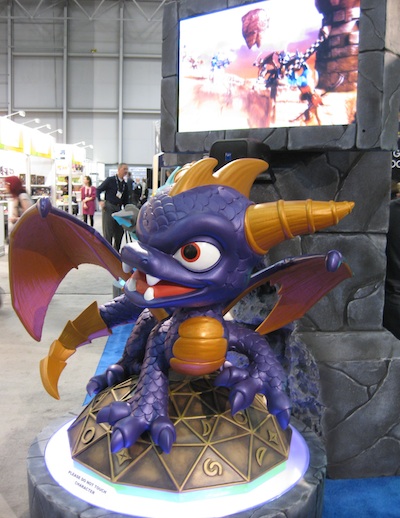 Then came Star Wars, and from there, everything changed. Star Wars provided us with figures that required less imagination than ever. Kid, this isn’t a random soldier you’re holding. This is Luke Skywalker. He comes with a whole backstory, a voice provided by the films, and lots of awkward feelings towards his sister. All you need to do is decide what crazy adventure to send Luke on. From G.I. Joe to today’s movie and television tie-in figure lines, all modern toy lines now come with their own prepackaged personalities. Imagine a setting, and off you go. The character development is already handled.

Skylanders takes the trend a step further. Not only do these little guys come with their own histories, voices, and mannerisms, you don’t even have to physically interact with them aside from placing them on a glowing surface. No more banging two figures together to simulate fighting. Place them on the table and mash on A to watch them stream fire and hurl rocks at their enemies. Want them to move? Don’t pick them up! Use the controller to guide their fully animated forms across a vividly colored landscape that you didn’t even have to imagine as you’re taken through a story that you didn’t have to create with your own lobes.

Essentially, Skylanders figures remove visualization and direct contact from the experience of playing with toys altogether. As I stated earlier, this could have an effect on the development of our next generation’s imaginations. Nobody would blame you for thinking that Skylanders is lazy, requiring no interaction, and could lead to lazy minds. Your brain is a muscle. If you don’t exercise it, it atrophies over time. Hot media, then, wouldn’t push the mind as hard as cold media, and since Skylanders is hot, it must be killing our children, right? 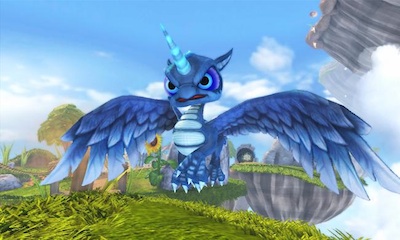 But what if removing visualization from the act of playing with toys by blending them with games could actually benefit a developing child’s imagination? Based on my personal experiences growing up with games and hot toys, it definitely seems possible.

I’ve taken aptitude tests my entire life. Sometimes they came from my teachers; others I performed independently out of curiosity. No matter what, the results always came back the same. On a general one-to-ten scale, I always found that I ranked nine or ten out of ten in every single aptitude category save one: spatial relations, and by extension visualization, are my kryptonite.

Tell me to walk five feet, and I’ll have to think hard about how far that actually is. Tell me to picture a cube, and I’ll construct a shaky, hard-to-maintain outline in my mind that I can’t adjust in my mind’s eye without destroying it. Even failing to concentrate causes it to vanish. It’s been an issue my whole life, and it makes playing Professor Layton games something of a personal embarrassment. 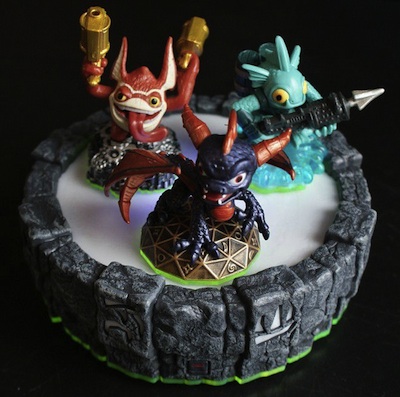 Growing up, I had a hard time developing my imagination during play, not because my toys were too hot, but because I couldn’t visualize things for them that weren’t physically there. All of their voices were mine. Their battlegrounds were always my bed and floor, because I just couldn’t picture a pile of blankets as a mountain the way my friends could. I started to think that I would never develop my own sense of creativity and imagination.

When I was in the first grade, we had the opportunity to use our newfound writing skills to craft our own stories, and some of the really cool sixth graders would illustrate them for us. This is where I first found my knack for writing, and while most of my classmates got their token tale bound with cardboard for their shelves at home, I ended up with about half a dozen stories. My parents still have them. (Parents love hoarding embarrassing reminders of their children’s formative years.)

The trick with those stories was taking concepts and places I had seen in movies and video games and shaping them to my needs. My first story was about a turtle travelling to see his relatives; it followed the basic plot and structure of Pitfall. Later, I wrote a story inspired loosely by Pac-Man. It was about a brave armadillo with a sword, shredding ghosts for his somnambulist spider roommate. With that story, I threw in a little Swordquest for good measure ­– it was my first attempt to blend my game experiences together into a unique story.

The tales were a bit derivative, but this is where my imagination began to grow. Games and movies served as visual, concrete examples of places, people, and things that could exist, and helped to kick-start my little mind. These were things I could see and study and commit to memory, so that when it came time to create my own worlds and characters, I could use what I had seen as a framework. Like a sculptor using scaffolding to surround and gain access to a large piece of marble, these tropes elevated me. Once the work was done, the scaffolding fell away, leaving me with unique creations that, over time, resembled their inspirations less and less. 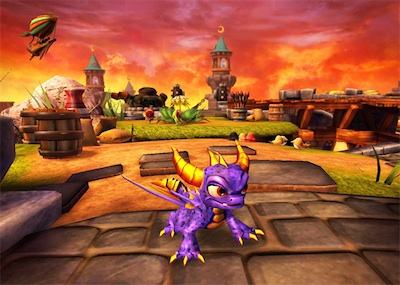 Skylanders figures may not provoke use of imagination directly, but they have every opportunity to inspire a new generation of thinkers by giving them worlds to draw on when creating their own fiction. Not everyone can start their lives reading War and Peace. Think of Skylanders as training wheels. Kids will (hopefully) end up creating their own worlds around them; when an entertainment property becomes this successful, it’s inevitable. Over time, as they become more comfortable riding on their own, they just might discard those training wheels, taking the balance and confidence they gained from having them to help them pedal towards their own creative ideas.

The only real danger that Skylanders poses, aside from wallet drain, is if the training wheels never come off. If the figures, and whatever follows them, fail to inspire young minds in the way I was inspired by the media I explored in the ‘80s, they may become attached to them and never grow.

That may not become an issue. Even as a cynical 30-year old gamer, I’m still charmed by the personalities and range of environments that Skylanders offers. The design is rudimentary, sure, but there are some genuinely creative character designs at play here, and some great messages within each figure’s unique story. If I had Skylanders when I was a kid, my own stories would have developed quite differently. There’s a greater well for children to draw upon in creating their own fiction than there ever was before, and those waters are only going to run deeper. So long as we encourage our youth to dig their own wells, and not stay in stagnant waters, I don’t believe that there’s any harm in letting our toys play with us.

Just Another TIE in the Death Star
Previous Post