The graphic novelization of Batman: Year One (originally published as Batman, issues 404-407) was two years old when I bought it in 1989, but according to the copyright page, the book was already in its fourth printing. I’m surprised my copy is still in such good condition, considering I got it when I was 12. Well, the spine does crack a little when I open it and it’s beginning to smell musty, but it’s lived a good life. 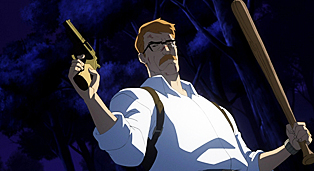 I don’t know how long I’ve been hearing rumors about an animated film of the Frank Miller/David Mazzucchelli story. Year One is a combination of noir and ’70s exploitation action that reads extremely well as a comic and comes to life in every panel. The book makes me realize how important a colorist can be to a story (in Year One’s case, Richmond Lewis, wife of Mazzucchelli.) I had high expectations for the film adaptation and while it doesn’t disappoint, it’s lacking in a few areas.

The movie clocks in shorter than I expected (64 minutes) and seems to leave out certain “bad” things from the book: Lieutenant Jim Gordon’s chain smoking, criminal Jefferson Skeevers’ drug use – elements that add to the grime of the book. Also, some of the finer points are forgotten, like the juxtaposition early in the story of Gordon coming to Gotham City just as Bruce Wayne is returning from years abroad, Batman’s musing on how he needs to make Gordon his ally and, perhaps most obvious to Batman fans, the movie minimizes Harvey Dent to just a background character.

My main sticking point, however, is the voice casting of Bruce Wayne/Batman (Ben McKenzie, notably of Southland and The O.C. ) My preference would have been Kevin Conroy, voice of Batman in almost every other animated Batman series, movie and videogame since the early ’90s. McKenzie’s voice doesn’t have the balls needed for the character, even considering that Bruce Wayne is only 25 years old and just starting out in crime fighting. McKenzie sounds too uptight, his elocution too stiff and staid.

On the bright side, there is the dead-on casting of Bryan Cranston (Breaking Bad) as Gordon, Jon Polito (Coen brothers’ badass) as Commissioner Loeb and venerable character actor Alex Rocco as Carmine Falcone.

Fellow Batman marks, as well as casual fans, should see this movie. While I like Batman: The Animated Series, et al., I think Year One shows that an animated Batman adventure can be serious, dirty and still good fun. DVD bonus footage includes a Catwoman short and a behind-the-scenes preview of the animated movie adaptation of All-Star Superman.

The Gender Gap: So Your Significant Other Doesn’t Like Games