Clean Room is an absolute fever dream. The premise is simple: But what if the Scientologists are right? What if their endgame isn’t to take celebrities money, it’s to funnel it into projects to fight crazy demons or something! That’s Clean Room.

But Clean Room, much like writer Gail Simone, refuses to go quietly in a nutshell. Its stories about desire, power, control, understanding, 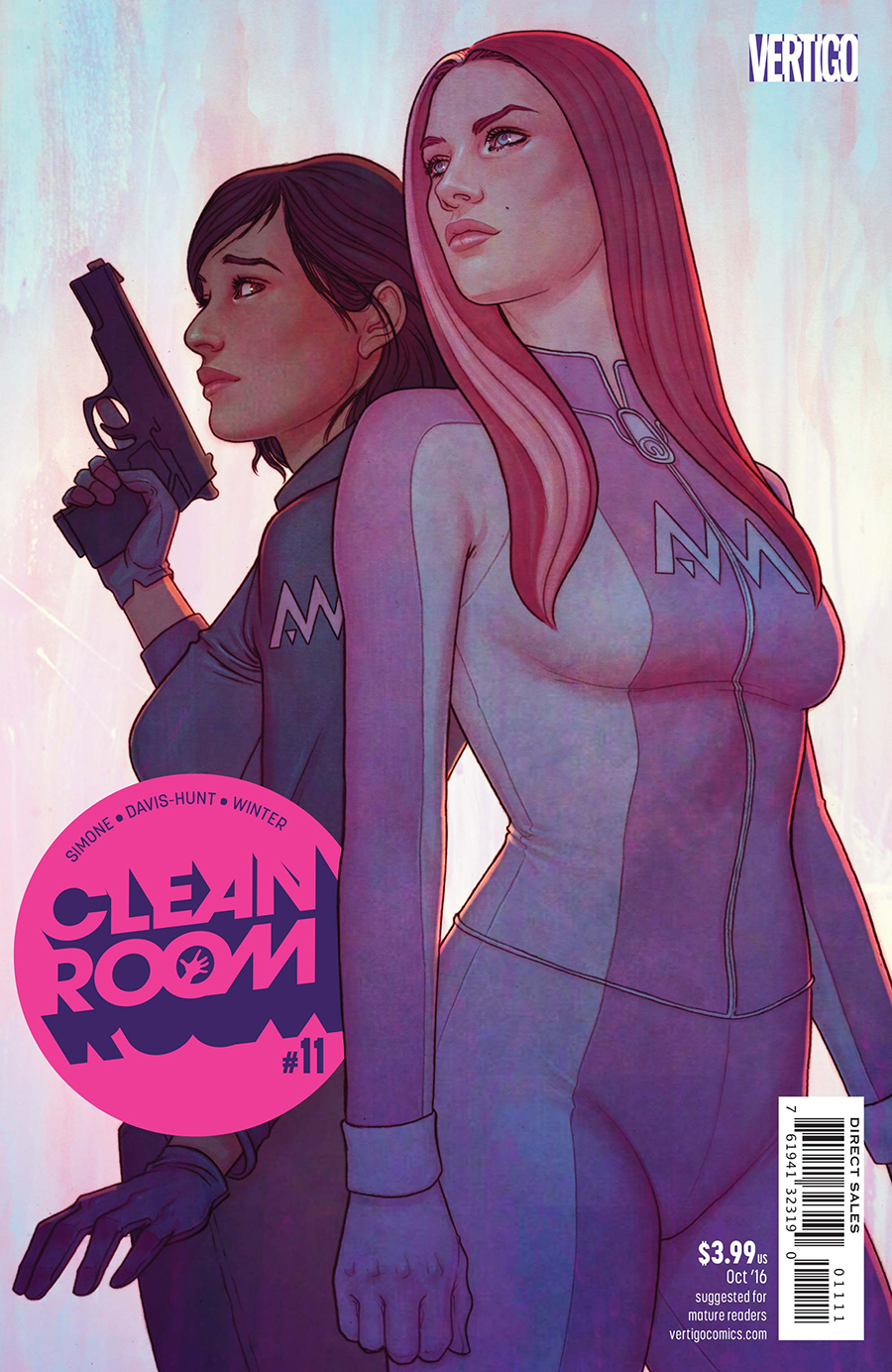 and handling loss. Any issue in particular is a roller coaster set to the drumbeat of the impending end of times and it’s absolutely unafraid to look at the horrible stuff that precedes the end of times.

The latest issue has all of that in spades and ratchets up the tension in almost every panel. Astrid Mueller, leader of Honest World Foundation, is out in a different sort of clean room. She’s been in self-imposed exile since her latest scrape with death. It’s a new place for her, mentally and emotionally. She’s fought the demons, or tried to, since she was a little girl. Now it seems she’s ready to retire.

Back in Chicago things are hitting the fan in all new way. The good demon is being tortured to death, the Honest World Foundation is being taken over by a crazy Christian who sells bottled water, and it turns out the biggest, strongest guy in the room has double crossed them.

Simone’s writing is on point here, as with every issue. In very little time Simone hits all of the notes that make the serious strong. Her writing is never stronger this issue than when Reston Wenuka, a CEO snake oil salesman, lectures the board of the Honest World Foundation. It’s a stunning display of power and pure swagger. We know that Wenuka is a torturer who loves bringing pain but that all happens out of sight. This time, we get to see him pushing in the dagger every moment.

What really ties this scene together is how artist Jon Davis-Hunt keeps Wenuka’s teeth bared as often as reasonably possible. We haven’t seen much of Wenuka so Davis-Hunt’s physical characterization of him is really all we have. And it works, really well. Really REALLY well. He’s got this sneer and presence about him that Davis-Hunt really brings to life.

Clean Room is wonderful and I’m not shy about how great it is. Every issue builds nicely on the previous one. Nothing feels wasted and every drop of delicious gore beautifully graces the page. The monsters look wonderful and they seriously pop. Issue 11 isn’t a great jumping on point but if you’re looking for some horror with great it’s a wonderful series you should take a look at.

“Again?!” an irritated Satan asks, summoned once more to the center of a crudely drawn pentagram by yet another hapless human practicing amateur-hour witchcraft. When that foolish mortal accidentally rubs away the edge of the pentagram, thereby freeing the Dark Lord to walk our physical plane, Satan punishes him by turning him into a dog. Here we have the origin of the werewolf, She Wolf style.

Three issues in, and I’m still not sure what to make of She Wolf. The first issue was pleasantly disorienting: more art than words; more dreamscape 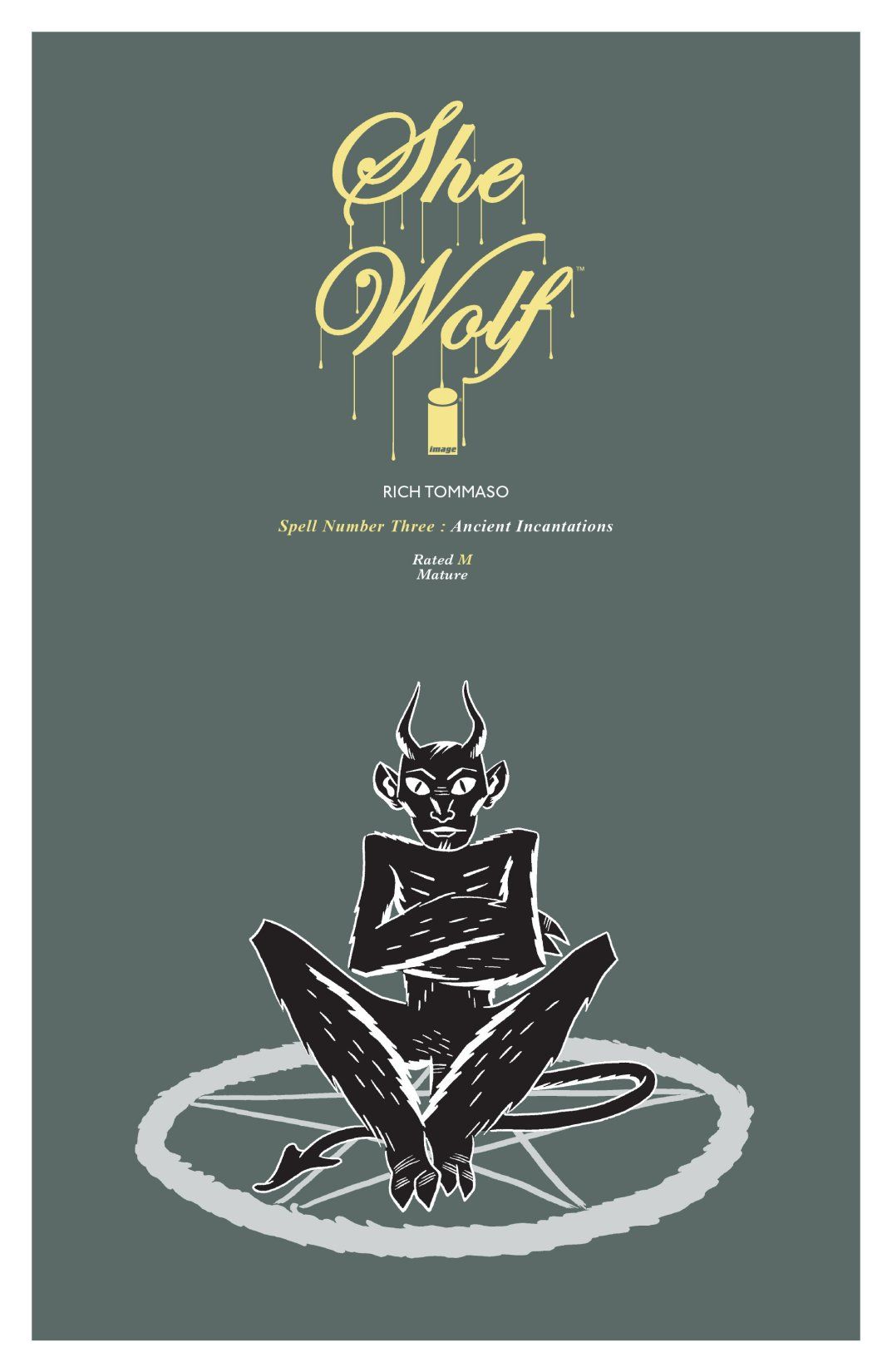 than reality. Several seeds were planted promising further exploration of themes of religion, sexuality, and the specific expectations placed on girls and women, especially girls turning into women.

The second issue introduced even more interesting women, the vampire Nikki and her (vampire? witch?) mother, but was bogged down in wordy exposition that unfortunately didn’t really explain all that much. The biggest and most interesting reveal in issue #2 was the twist that Gabby’s lycanthropy was likely hereditary and not the result of her dying boyfriend scratching her face back in issue #1, hinting that his wolfish transformation somehow came from Gabby herself.

The third issue is a welcome return to the puzzling surreality of the dreamlike first issue, but it’s also heavy on the expository storytelling. Case in point: the story of the very first werewolf, which is told well enough but is not all that original. It’s both a testament and a criticism of the writing that I was totally with the devil when he gave his exasperated, “again?!” I want more time with Nikki and her mom, who seems like a pretty major boss bitch in the supernatural world, and who seems to have some actual answers, besides.

Still, Tommaso’s artwork remains extraordinary, with color pulling double duty by setting mood and place, and the flattened, animated style of the line work helping to bewilder the reader. During one of Gabby’s dream sequences, it took me a couple of panels to realize the exact size of a character, a smart use of the overall limited depth perception.

Gabby’s lycanthropic family lineage is explored most fully in the pages with no words at all, by far the most interesting section of the issue. Buried in the artwork, there’s still a tantalizing focus on what seems to be a particularly feminine coming-of-age story. I hope we’ll get an eventual payoff.

Games Need To Grow Up