It is a truth universally acknowledged that a Gundam series’ quality is inversely proportional to how cool it strives to be. Consider the original series, Mobile Suit Gundam. A po-faced anti-war narrative sprinkled with new-age philosophizing about “the renewal of man” and bolstered by robot designs so toyetic they left you feeling you were watching a commercial. It was so earnest it hurt. And yet from that honesty it managed to pull an incredibly affecting meditation on the transience of life and the brute stupidity of war.

Mobile Suit Gundam Thunderbolt, itself a side-story to the events of Mobile Suit Gundam, is achingly cool. Cool in the way of something a teenager would show to his parents to prove that comics are more serious than their stuffy old literature; cool in the way of a late-era Frank Miller comic; cool in that grim, stupid, utterly unselfconscious way a Zack Snyder would eat up. Set towards the end of the One Year War in a shipping corridor called “The Thunderbolt Sector” that is riddled with the debris of a thousand battles and wracked by lightning storms, Thunderbolt chronicles a conflict between a Federation contingent called the Moore Brotherhood and a division of Zeon’s finest snipers with a particular focus on the rivalry growing between their respective ace pilots, Io Fleming and Darryl Lorenz.

It’s not that a grittier, unsparing take on Gundam is unwelcome. Iron Blooded Orphans has spun narrative gold from a story about child soldiers struggling for their place in a world that treats them as human debris. Nor is the original time line somehow sacrosanct; many of the finest Gundam series – particularly War in the Pocket and 08th MS Team – have found beauty in the tribulations faced by rank-and-file during the One Year War. The problem is that there is neither humor or humanity in Thunderbolt’s take on the war.

For author and artist Yasuo Ohtagaki, the characters, the plot, and the world do not exists to tell a story; the story only serves as a medium to show off the next idiotic spectacle. Where a better writer might make something grimly humorous out of the fact that the platoon of Zeonic snipers is made up entirely of amputees and that they’ve been dubbed “The Living Dead Division”, (perhaps show us how these men ironically claim that title to keep a sense of identity now that they’ve been discarded by the higher-ups) Ohtagakai only wants us to marvel at the gap between their physical feats and their physical appearance. They’re like the crippled masters of old kung-fu movies. Similarly, one pilot has a habit of watching porn while on standby, but this quirk is not their to humanize him. It does not even make a simple comment on the banality of slaughter, on the way even the most crass of everyday habits continue despite the hell of war. It exists only to make things seem somehow darker, grittier. “Cooler.” 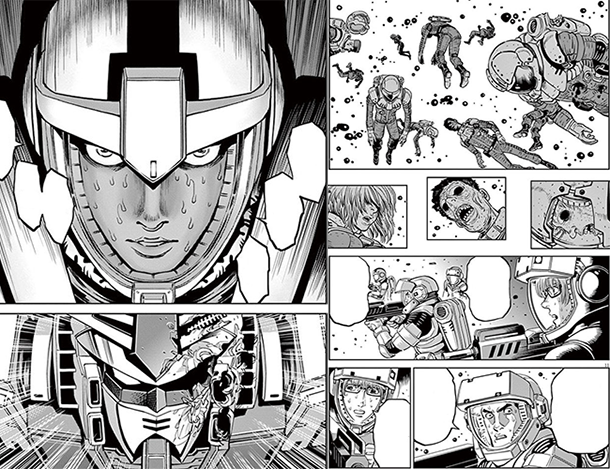 Which is, really, the whole mission of Thunderbolt: it exists to invest Gundam with a grave style many might find it lacking, but what a hideous style it is. The characters, the mechs, the environments are all over designed: the titular Gundam is a mass of boxy missile launchers and beam cannons and armor. Main character Io Fleming looks like he was created to appeal to about four demographics of fans. Even the panels are over designed: they’re so packed with detail and characters and debris you wonder if maybe Ohtagaki wanted you to experience the confusion felt by the pilots as they skulked through debris fields just waiting to be picked off, but the pacing is rushed so that you never experience the horror a soldier waiting to die might feel.

Not that those scenes intended to develop character are allowed the space or silence essential to reflection: there is always a radio chattering away, expressing what the characters will not say themselves or a close-up on some overly-emotive face that is so busy telling the reader what these people feel that it never registers emotionally. Darryl hates Io because he killed the fiance of the woman he loves and Io fights Darryl because Zeonic forces destroyed his home colony, but it does not connect. None of it does, because the author will not even allow himself such a connection. That might require him to stop the posturing for a second and admit that there is something deeply seedy about this story. But he won’t. That simply wouldn’t be cool.