I wanted to read Astonishing X-Men #51 to see just how Marvel would approach same-sex marriage. And given my recent foray into the world of homosexuality and comic books, I wanted to make sure to review it as well. So how does it fare? I think Marjorie Liu does a great job of capturing the realities – as heartbreaking as they can be – about homosexuals and their quest for equality. 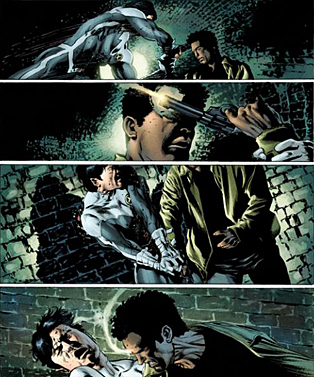 I don’t follow Astonishing X-Men, so I was a bit lost on the story. Marjorie Liu does a nice job of really focusing on the characters and their reservations. Much like any couple getting married, the two characters – Jean-Paul and Kyle – are struck with the same fears. Are they rushing into it? Will it be successful? Granted, none of these questions are answered, but by referencing well-established marital fears, Liu gives the story a true-to-life basis.

The other thing Liu does well is give a nod to those who don’t believe in same-sex marriage. Unlike in DC’s Earth-2, where every person around Alan Scott seemed to be celebrating his homosexuality, Liu avoids making everything perfect. One character flat out refuses to attend, and another has to drink his way through the ceremony to stomach it, to which his friend replies, “I wonder what my grandma would say about this.” At the wedding itself, Jean-Paul points out how many empty seats there are, but as his sister says, “They don’t matter now.” Because Liu doesn’t write a Pollyanna story where everything turns out perfect in the end, the emotion has more weight to it, and the realistic touch makes the comic a better read.

Mike Perkins’s illustrations are gritty and muddled. While Dustin Weaver and Rachelle Rosenberg illustrate the cover, the art inside the book is the exact opposite. Rough crosshatching makes faces look misshapen and dirty. When Jean-Paul talks to his sister, his facial expressions are unintentionally funny. Perkins and Andrew Hennessy go a bit heavy with the inking at times, making the images lack clarity and detail. Even the one full-page illustration, where Jean-Paul and Kyle exchange vows, has awkward composition that makes for a distracting visual. But the illustrations really take a back seat to the story.

Much of this comic is spent on trying to downplay a same-sex marriage. Marvel could have hyped this up by releasing it as a one-shot or sealing it in a plastic bag, complete with Jean-Paul and Kyle marriage goodies like placards, a wedding album and some cheesy invitation. But they didn’t. With a business-as-usual attitude, Astonishing X-Men tells a very realistic story of love, marriage and the fear of commitment – not because of lack of love, but because of lack of success. Yes, Kyle and Jean-Paul are two men and yes, they’re gay. But they’re also human. And their very real and very relatable emotions are awesomely conveyed. I applaud Marvel for taking the initiative, and I commend them for telling a very realistic love story, even if it involves superheroes. 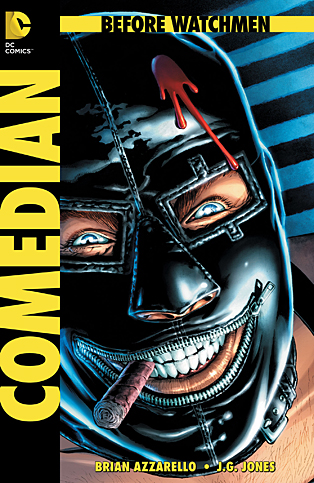 When I picked up Before Watchmen: Comedian, I expected something more than a one-dimensional rehashing of the character established in Watchmen. Unfortunately, that doesn’t occur, and what follows is a story that gives you everything you already knew about the Comedian, only this time involving the Kennedys.

Blake’s connection to the Kennedys is referenced in Watchmen, when he says, “Just don’t ask me where I was the day Kennedy was shot,” and he was depicted firing the kill shot from the grassy knoll in the Watchmen movie. In this comic, however, we’re given a different perspective altogether. In fact, it appears that Blake is friendly with the entire Kennedy family, including Jackie. This pays off at the end of the issue, but its purpose is still not clear. Whereas Darwyn Cooke took existing characters and ran with them, Azzarello seems comfortable playing in the traditional sandbox. What I mean is that he adds no new depth to Eddie Blake, at least in this issue. In Watchmen, Eddie Blake is known for his quick temper, his love of alcohol and his overt violence. In Before Watchmen: Comedian, the exact same character appears.

J.G. Jones, who crafted the beautiful covers of both 52 and Final Crisis, illustrates the issue, but his drawings are, in a word, inconsistent. The book opens with a beautifully-drawn picture of Eddie Blake, bathed in blue moonlight, looking at a baseball. His Kennedy illustrations, however, go from looking exactly like their historical counterparts to looking nothing like them. Jackie Kennedy at least maintains a consistency in her appearance, but both John and Robert Kennedy change faces several times.

Whereas Minutemen and Silk Spectre added depth to their characters, Comedian only succeeds in telling us what we already know about Eddie Blake. Nothing that occurs in this issue goes beyond his established persona. I’m still intrigued to see where Azzarello’s taking this, especially because most readers assumed that Blake had something to do with the Kennedy assassination. But if the comedian is supposed to be the most interesting part about this series, Azzarello needs to work harder at separating him from what came before. 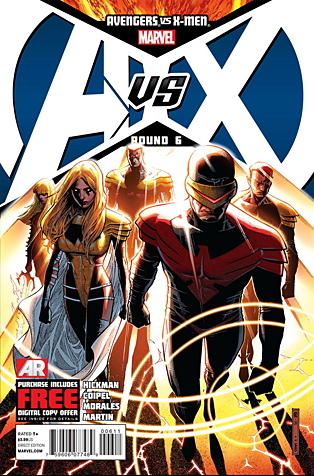 Bannen’s Book of the Week: The fact that it took five issues for the Phoenix Force to finally appear was a bit of a concern for this reviewer. As with any event, I was trying to figure out what the purpose of the story was. The Phoenix choosing not one but five people in the previous issue was an interesting twist, so I was curious to see what Avengers vs. X-Men had in store for the follow-up.

The story takes place 10 days later, and major changes have occurred. The time bump is necessary to the plot, and it makes the conflict even greater. Basically, Cyclops and the X-Men have used the Phoenix Force for good.

So why does it seem so terrifying? It could be Scott Summers’s robotic demeanor when he talks with Charles Xavier, or the cryptic conversation that occurs between Lei Kung and his seers, but something doesn’t feel right. Tonally, Hickman establishes a Stepford Wives type of perfection that feels unnatural. Through characters like Hope Summers and Steve Rogers, readers are given a view of the true nature of things and much as one would assume, things are not as perfect as they seem. A tangible tension in the comic is carried through the entire issue as the X-Men have altered the world for the better, but through subversive ultimatums.

Olivier Coipel’s art is much more appealing than John Romita Jr.’s. Coipel, whose work I know best from Thor, has a cleaner style than Romita. His characters are smoother-looking as well, and Mark Morales’ inks help create sleeker images. There’s a large amount of art in this book, from the ferocious yet sage Beast to the heavily-shadowed Thunderer. Coipel, Morales and colorist Laura Martin work together to create some exciting imagery. Whenever the Phoenix-empowered crew appears (consisting of Cyclops, Magik, Colossus, Namor and Emma Frost), the details involved in their costumes as well as the fiery force around them are, in a word, impressive.

The composition and panel construction are also something to note, as Coipel will shift to tight shots of characters’ faces. Close-ups in particular are standouts in this issue, and expressions are rendered with such perfection that emotion is palpably transmitted through the visuals.

We’re finally seeing why this series pits the Avengers against the X-Men. The purpose of the series was a bit nebulous at first, but after this issue, the story has a more lucid focus, and given the power the Phoenix Force bestows upon its handlers, I’m sure we’re going to see some pretty intense action. But beyond that, it’s a truly emotional piece. Beast says it best when he tells Wolverine, “More and more each day it looks like you and I have no place to call home.” Mutant members of the Avengers are being pitted against their allies, but where Civil War was politically charged, AvX has an emotional tinge to it. The comic shifts and centers the story, and now with a renewed focus moves into a second half that sets up a lot of action, emotion and, in all likelihood, death.