With the talent attached to this title, I had very high expectations. I’m a huge Stephen King fan. I have all the first editions of his books, as well as several limited editions of his Dark Tower series, and I jumped on board American Vampire, initially, because of him. The same can be said for Joe Hill. Locke & Key is one of my favorite series, and I’ve read and enjoyed both Horns and Heart-Shaped Box. 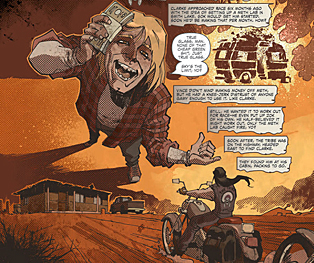 Here’s where the “but” appears: I expected a lot more out of this story. Road Rage isn’t bad. It’s a violent and scary tale of a murderous trucker. But it feels, well, expected from these two. With the level of originality both writers have expressed, Road Rage, while entertaining, feels like standard fare for King and Hill.

Much of the backstory feels like it’s lifted from an episode of Breaking Bad. There’s meth, as well as a trailer in the desert, and a huge load of money lost. The crazed truck driver’s involvement isn’t clear yet, but there are hints as to his connection to the bikers. We learn about Race Adamson, a war veteran who recently returned to his old biker crew after a dishonorable discharge from the military. It turns out that Race ditched his squad, and the military booted him because of it. His buddy, Vince, was involved in the meth deal gone bad, and now the crew is looking at parting ways, with some of its members going into hiding while the rest are going to try and pick up the pieces so they can make their money back.

But on their way, they piss off the wrong trucker and in a brutally bloody scene, he takes out several members of the crew by knocking them off their bikes and running them over. While Vince concocts a clever plan to ditch the truck, not all members understand the code, and soon Race is left alone with a massive semi bearing down on his back tire.

Nelson Daniel’s art – gritty and messy – helps the mood of the story. He really shines in the second half of the issue, when the trucker goes berserk and people start dying. Daniel has a way of drawing the truck so that it looks like it’s launching itself into the air, and many of the shots of the riders are from a low viewpoint, so that the grille of the truck appears massive. At times, Daniel makes the truck come alive, and as much as the driver is a character, so is the truck. A few times, it’s as if he gives the truck a face, but with one headlight busted and the grille covered in blood, it looks like a crazed beast.

And this is my final point. I will be picking up issue #2, and I will be following this series because while the story isn’t too original, I felt the fear King and Hill were trying to communicate. Isolation can be a pretty terrifying thing. The set piece of the story – the desert and endless miles of flat pavement – makes for a visceral tone. With a splintered crew, Race is completely on his own and trying to survive against a terrifying foe.

It’s a situation I’d hate to be in, and one I can’t wait to read more about. 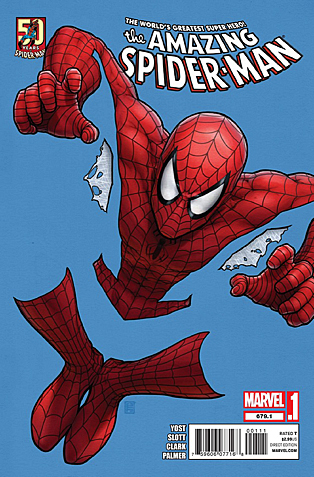 The issue starts from the viewpoint of Uatu Jackson, a Horizon Labs employee. Uatu has a special job there. Readers don’t find out his area of expertise until much later, but it plays a vital role in the story. A secret scientist is being kept in Lab 6 at Horizon, and Uatu is desperate to know who it is, especially when he sees Reed Richards exiting the lab.

The action then switches to Peter Parker, and the two narratives become intertwined. This split narration makes for an entertaining read, as Uatu and Peter share a lot of similar ideas. But Uatu has the mindset of a person who hasn’t seen the violence Peter has as Spider-Man, so his innocence and excitement make him a relatable person. Plus, Peter and Uatu’s attempt at figuring out the mystery of the person in Lab 6 reminded me of Bruce and Dick trying to solve a mystery in Batman. I always enjoy when Peter has to work with those around him, because he’s such an everyman hero and can’t do it on his own, which is why the beginning of this issue was great.

Uatu is an interesting character, but Slott and Yost eventually shift the narrative back to Peter Parker and then the issue becomes like any other Spider-Man comic. Additionally, the secret being kept in Lab 6 also gets his own voice, and then the issue becomes too cluttered. Plus, the added narrator doesn’t reveal anything new. He’s saddened by his actions and barely in control of them. Yet this is explained by Peter’s boss, chemist Max Modell, so then the story gets to be a bit of a cumbersome read. I liked the payoff on the final page, but getting there was a bit arduous.

My real gripe with the issue was that from the beginning, I thought I would be following Uatu as he experienced Spider-Man at Horizon Labs from the viewpoint of an outsider. Uatu is small and very childish (I think he’s only meant to be 15 years old). I would have preferred to see him experience the events rather than having Peter double whatever Uatu says. In the end, he becomes a throwaway plot device and nothing more.

I enjoyed the visuals in this comic much more than usual. I’ve complained about Humberto Ramos’ cartoonish depictions, so Matthew Clark’s work was a welcome diversion. I like how he draws the secret in Lab 6 and the payoff character on the final page. The only distracting part is how Clark draws Uatu and Peter’s feet. It’s a small gripe but a noticeable one. Both characters look like they’re wearing pants two sizes too long and too wide in the calves. At one point, it looks like Uatu and Peter have tree trunks for legs.

I feel like lately I’ve been doing a lot of complaining about Amazing Spider-Man and I don’t mean to. I’m still, for the most part, entertained by the stories. And I think the comic has one of the most talented teams writing and drawing it. But it’s lost some of the spark it had in previous issues – particularly the book’s run on reinventing its villains a while back. This feels a bit banal, and with a character who has such universal appeal, Marvel needs to do a better job of selling what is definitely one of their flagship series. 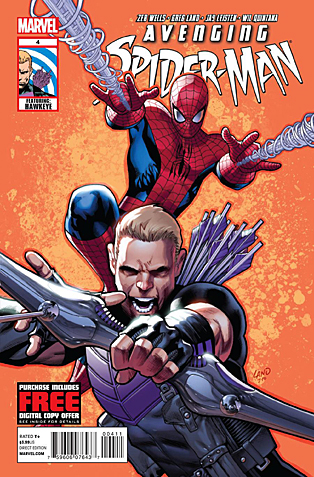 Bannen’s Book of the Week: Marvel’s buddy comic continues its strong run, this time pairing Spider-Man and Hawkeye. Whereas the previous three issues dealt with a lot of action and a detailed story that showcased Red Hulk, Avenging Spider-Man #4 tells a different kind of story. It is not, however, short on action, and I think readers will enjoy getting to know Clint Barton a little more.

The story Zeb Wells tells in Avenging Spider-Man is less about a team-up and more about character development. Hawkeye spends the majority of the comic being an arrogant ass and deriding Spider-Man for his lack of skill. But when Clint reveals the motivation behind his persona, readers can’t help but feel for him. Nor can Peter. He’s faced with a minor dilemma on the final page, and the resolution is what you’d expect from such a humble person.

This isn’t to say that the issue is heavy-handed – it’s not. Wells throws in a lot of action, and his character dialogue makes for many funny moments. For example, Hawkeye comes upon a group of kids practicing in the park, and one of the kids asks Clint to sign his compound bow. When the kid tries to defend his instrument by saying his dad bought it for him, Clint replies, “Has he always wished you were a girl or something?” The dialogue between Peter and Clint has the same loose, humorous feel, and most of their interactions have great punchlines.

I thought I’d be missing Joe Mad this month, but Greg Land fills in nicely. He has a different art style, and his photorealistic drawing makes the comic fun to look at. The panel construction is pretty standard, but Land throws in a lot of action sequences, and he has a few pages of smooth back-and-forth between Peter and Clint. His ability to depict facial expressions really sells the emotions of the characters. Even with Peter wearing his mask the entire time, at no point are his feelings ambiguous. Obviously, Wells has a lot to do with this, but writers need good artists to communicate their intent.

Also, depicting the action of an arrow can’t be easy. Readers have to infer the movement between the panels, and Land presents this in a fluid and polished form. Will Quintana uses muted colors – Spiderman’s costume isn’t a bright red, nor is Hawkeye’s costume a gleaming purple – but this doesn’t detract from the visuals. It’s just something I noticed upon a second read and it speaks of the skill of the colorist.

An intangible freedom exists around Avenging Spider-Man. This is what makes it an easy story to tell. With no large arcs to include and no major continuity to connect, Wells and his crew are free to craft whatever kind of story they want. The comic also gives newer readers an introduction into some of the more esoteric aspects of the Marvel Universe, and it makes a great jumping-on point for fans who would otherwise feel intimidated by the rich history found in the regular series. So far, Zeb Wells has authored four pretty outstanding issues, and the artistic talent that goes along with the story makes Avenging Spider-Man a book that should be on your pull list every month.