The Setup
The other day, I had the pleasant experience of meeting a couple who appears to love each other very much. Heartwarming, really. There’s one problem, a common problem – the guy loves videogames. The girl? Not so much.

The Girlfriend has a chance, however. While it is unlikely that she will ever be fully into them in the way we are, she wants to at least understand what “us gamer folk” are talking about from time to time.

No one likes feeling left out. Remember when you were a kid and the adults said, “Timmy, go in the other room, we’re talking about President Nixon – you wouldn’t understand.” I bet you grew up hating President Nixon.

Anyway, the point is that The Boyfriend doesn’t want her to leave the room and has made valiant attempts to teach her gaming.

What I did next was very important: I neither taught her about games nor showed her games. I sold her on games

Problem
The Girlfriend isn’t that into it, so teaching her about games is going to do what teaching physics did to you in high school. Unless you had an inherent interest, you were probably just sitting, eyes glazed over, wishing time could move just a little bit faster. Worse, the games he used to teach her were Call of Duty: Modern Warfare 3 and GoldenEye 007: Reloaded. There were some attempts to get her interested in Wii games, but that just felt like pandering because they were too kid-oriented.

Aside from those poor choices, the main problem is that he is shoving a controller in her hand – something she wouldn’t otherwise be picking up – and saying, “Here, honey, go fail at something you feel you suck at while I watch and make you feel like a child.”

I know that’s not what The Boyfriend meant to do, but that’s what’s happening. This leads to girls giving up entirely and, ultimately, staring at the console across the room wishing Biblical plagues upon it.

Solution
Luckily, this is where I, a marketing major, step in. I’m someone who has sold you system warranties you never needed during my stint at EB Games (sorry, except not really – we used to get 20 percent commission), and most important, a girl representing half of a happily married gaming couple. One day, these young lovers were at our house for couply stuff (pumpkin pancakes and maple bacon, if you MUST know), and the guys decided they were going to show her Castlevania: Lords of Shadow.

The typical girlfriend chatter began to flow: “Oh no! Get them! Those are the bad guys, right? Oh no! They’re trying to kill you, right?” I knew it was all a sham, though – she checked her text messages a dozen times as she was talking. She was bored as shit and, honestly, so was I. Watching anyone play anything is boring. You either play yourself, or you leave until it’s your turn.

“Girlfriend!” I called from my office, computer already booted up to several amazing trailers. “Come check this out.” In she ran, like Bambi into the meadow, eager to get away from the cloud of testosterone-laden gameness that was hovering over my Ikea couch like another even uglier Ikea couch.

What I did next was very important: I neither taught her about games nor showed her games. I sold her on games. What better way to do that than with the incredible trailers and in-game clips that have been made in recent years? They give you a great taste of the story, characters, content and the soul of a game. They go beyond the FPS view and blowing stuff up. These are the best moments, cinematically presented. You can’t deny it; you get sucked in. At first, I thought she was watching to be polite, but than a miracle happened. She pulled up the extra chair and started asking me questions. 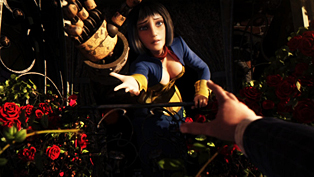 She was blown away by the level of animation detail. She loved the Assassin’s Creed series and how a game “cared about having a character grow old and following his story.” She was silent and moved after Crysis 2 and Dead Island. Prototype made her yell out, “Oh, he’s going to get it!” when the guard shoots the doe-eyed non-zombie girl. Lastly, the real advertisement about human augmentation that Eidos created for Deus Ex: Human Revolution made her truly respect the concept of the game and start talking to me about what would happen if that technology existed – which was exactly what that entire game was intended to do.

Once she left the room, I didn’t expect her to want to become a gamer. Her favorite character is still Sonic, which is fine (don’t you dare talk shit about Sonic. Sonic Generations is a great game, goddammit). She was happy and said to me, “Now I’ll know what you guys are talking about.” Before she left, she asked me, “What was the game where the girl is trying not to be found by that big machine thing?” The Boyfriend looked over her head at me in wonder and awe as I smiled and answered, “BioShock Infinite. It will be out next year.”
Mission accomplished. Pencils down.

Conclusion
Your significant other might never want to sit next to you and play what you’re playing, but he or she can come to relate to it in their own way. Regardless, it’s in your best interest to make them feel included in your hobby, so that – if nothing else – they don’t end up almost 60 years old, like my mother, referring to them as “blow-up games” and swearing that one day she’ll just “throw all these computers out onto the lawn.” Because by then, we won’t have lawns – we’ll have cyber grass. I’m not sure what that will do to your computer, but it will probably result in a corrupted hard drive. Just sayin’.

Call of Dewty: How We Eat Games
Previous Post

Something to Strike Fear – Batman: Year One Animated Movie Reviewed