Last week I ruffled some feathers when I said that hating on the Spike Video Game Awards was boring. I hope everybody who thought I was talking about them knows that the point was made with love – much like a good friend would point out that you have a piece of arugula stuck to your teeth.

I hope you’d do the same for me. I know that I can be boring as hell sometimes. Anybody who follows me on Twitter knows that I link to far too many lefty newspaper articles about how the rich, the right and myriad other dumbasses conspire to ruin this country. See! I’m getting boring again. You can also always count on me to fall head-over-heels in love with oddball games, movies and music. I’ll praise the stuff to the rafters while everybody rolls their eyes. But my most boring trait is my general disdain for humanity. I never fail to underestimate my fellow man’s penchant for jerkiness. This attitude is tiresome. But even more tiresome is my constant griping about it.

A couple of days ago I attempted to catch The Girl With The Dragon Tattoo with my wife. I failed miserably. That’s because I forgot how much I hate seeing movies in public – where people eat noisily, talk incessantly and gape at their glowing smart phones. I blame myself for the whole tedious fiasco. 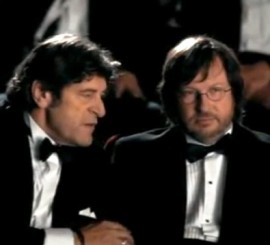 Before the movie began, a group of noisy baby boomers took one of the rows ahead of us. Then, just as the flick started, a couple of latecomers plopped themselves down in our row. The dude hammered out a text while his female companion stuffed her face with popcorn. Then they started talking. Their running commentary was louder than a mutter – enough to merit a response.

“Are you guys going to talk through the whole movie?” I asked, half getting out of my seat. My fight or flight instincts kicked in so I can’t exactly recall what the guy said next. But I retorted with, “You guys sat down next to us.” I do remember what the guy said next because it was so childishly audacious. “No, we didn’t,” he said, noting that there were several seats between us. I was fairly flabbergasted, but somewhat at a loss as to what to do next. “Sit back down,” he said. I did, because I didn’t really want to fight with the guy. I just wanted to watch the movie.

Sadly, my aggression and submission worked. The guy and his companion clammed up. I took some time for my heart rate to settle. But the damage was already done. I was too distracted to really get into the movie. That’s when the other shoe dropped. Another pair of latecomers showed up. They, inexplicably, seated themselves on both sides of a party of two. The man sat in the chair next the couple inspiring them to move over a seat or two to get some breathing room. The woman then beckoned to her friend, encouraging him to get up again and sit with her. He did so with a maximum amount of fuss, then started talking to her at full volume.

Insanity is doing the same thing over and over and expecting different results.

At that point, my wife suggested we leave and get our money back. We asked politely for a refund and left the theater, most likely never to return. So here’s me being boring again. This was all my fault. There’s a bit of folk wisdom frequently and erroneously attributed to Albert Einstein and Mark Twain. “Insanity,” the saying goes,”is doing the same thing over and over again and expecting different results.”

I should have known better than to go to a movie theater and expect people to be considerate. People say that such ill behavior is a sign of the downfall of society but I have doubts that humankind has ever been able to sit in one place without driving the uptight batty. If our elders and ancestors were so well-behaved then why do the peanut gallery and the groundlings have such a reputation for being raucous? No, I firmly believe that man is slowly improving in most regards. Unfortunately, only a Sequoia can perceive the change.

Last week, when I sat down to watch the Spike VGAs, I was being just as boring as the people I eventually called out. I knew that people were going to gripe on Twitter. I purposefully jumped into that fray with the intention of getting myself riled up. That’s just as stupid as going to the movies and getting mad that people talk. I’m forever doing this kind of thing. I distract myself by reading message boards like NeoGAF where people love to complain about pretty much everything, gaming-related or not. I narcissistically scroll to the bottom of articles I’ve written only to find comments meant to make me feel bad. And I play online games with strangers, hoping that just this once they won’t be dicks.

Here’s another quote of questionable providence. Lots of folks say, wrongly, that it comes from the Tao Te Ching. I came to the oft-paraphrased koan via David Lynch’s film adaptation of Dune. “Learn to yield and be soft if you want to survive. Learn to bow and you will stand in your full height. To bend like a reed in the wind – that is the real strength.”

I’ll go one further with my new zen motto. “Stop standing in the wind, dumbass.”

Pretension +1 is a weekly column about the culture of videogames. Every so often it strays really far off topic.

Spike Video Game Awards, The Girl with the Dragon Tattoo