Only 10 percent of people are born left-handed. I’m one of them. And I think that minor but meaningful difference (among myriad other nudges and foundations) helped make me the weird, Satan-obsessed person I am today.

It all started in kindergarten, when I was learning the rudiments of interacting with the world – clumsily scrawling stuff onto construction paper, then cutting said parchment to shreds with dull scissors. Back then, I could never make right-handed scissors work. I’d squeeze on the things and they’d just mush the paper up, never breaking through and cutting the fibers. I soon learned that every classroom had one shitty pair of left-handed scissors hidden somewhere at the bottom of a drawer. While everyone else was already hard at work on their art, it was my job to find those crappy, frequently broken scissors and try to make them work. Among all the ways that I was different from the other children, this one seemed the most annoying 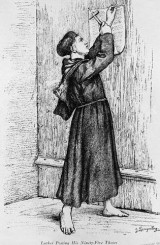 One of the many stories I remember about my late grandfather is that he taught himself to be ambidextrous. I can’t recall the reasons why, but it doesn’t seem odd to me that a Polish carpenter and baker would knuckle down and learn to work with both hands. That’s how people rolled in the ’30s – they set their minds to shit and they did it. Being born left-handed, I think I understand a little about what he was coming from. By the time I was in high school I learned to conform when it came to my handedness. I taught myself to use right-handed scissors and learned to play guitar and skateboard like everybody else. I was overly tall, clumsy and bookish already. I didn’t need another way to stick out. Still, a good sleuth would have identified me as a left-hander in a heartbeat. Throughout high school, the side of my pinky was perpetually stained with blue and black ink. My right hand, while useful for many teenage diversions, was worthless when it came to writing.

Long after my sister and I were fully grown, my mother confided that she was sorry she let us watch “depressing” movies like Amadeus when we were kids. She thought we might have been happier had we been sheltered from difficult material. But I don’t think we could have ever grown into shiny and/or happy people. There was too much pushing us down the road less traveled. Dad was a revolutionary – a Cuban immigrant who participated in the overthrow of Batista, and then a resistance against communist rule while he was still a teenager. Mom was a taboo breaker, marrying a Latino in the ’60s when far too many still frowned on mixed marriages. My sister and I grew up in a home full of books, where Cosmos shared space with the Bible and sexual education handbooks. And if all those books of learning didn’t do their trick, the stack of Mad magazines under my bed would do the job. I don’t think mom could have kept us from turning out weird if she tried.

Try she did. I was dragged to church long into my teens and I believed much of what I was taught, even though much of it didn’t sit right – I loved God and I feared Satan, though I hardly believed in either. It was ages before I got the courage to watch The Exorcist because, somehow, the thought of an invisible, ever-present malevolence seemed more real to me than that of an invisible, ever-present benevolence. The data just didn’t support it. 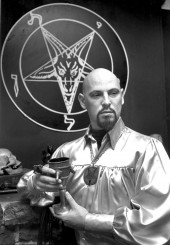 Eventually I stopped going to church. Mom wasn’t happy, but she couldn’t do much about it. Even there, I think my path away from God was trailblazed for me. Way back in the day, Grandpa John had a disagreement with the Catholic church. The organization’s dogma insisted that a suicide was doomed to hell. That didn’t sit right with my grandfather after a family member died by their own hand. So Grandpa split from the church and became a Lutheran. Sure, that’s not exactly a huge change, but as I have grown older I have come to admire the man for that bold rejection of authority and have come to understand that the precedent was a vital part in making me who I am today.

Many of my choices have been informed by my grandfather’s willfulness, my father’s youthful rebellion and my inborn differences. But the urge to conform remains strong. Videogames, like a fascist society written in machine code, eventually bent me to their will.

During the uneasy transition from 2D to 3D gaming, I found myself settling into a control scheme that felt natural – southpaw inverted. Early console shooters gave me the leeway to use newfangled analog sticks and buttons in the way I saw fit, but not all games supported that way to play. And when they did, you often had to hunt through the game menus to change the settings. It was around the turn of the century, just after I finished grad school, when I gave up the ghost on southpaw. Me and my ex-roommates, now neighbors, held Halo LAN parties in the run-down Los Feliz craftsman duplex where we lived. We strung CAT-5 cable all over, squeezing consoles and TV screens wherever we could manage. The matches went on all night. In that drunken scrum, I soon found that giving in and playing the way that Bungie thought I ought to was easier than fumbling with the controller every time I decided to switch seats. 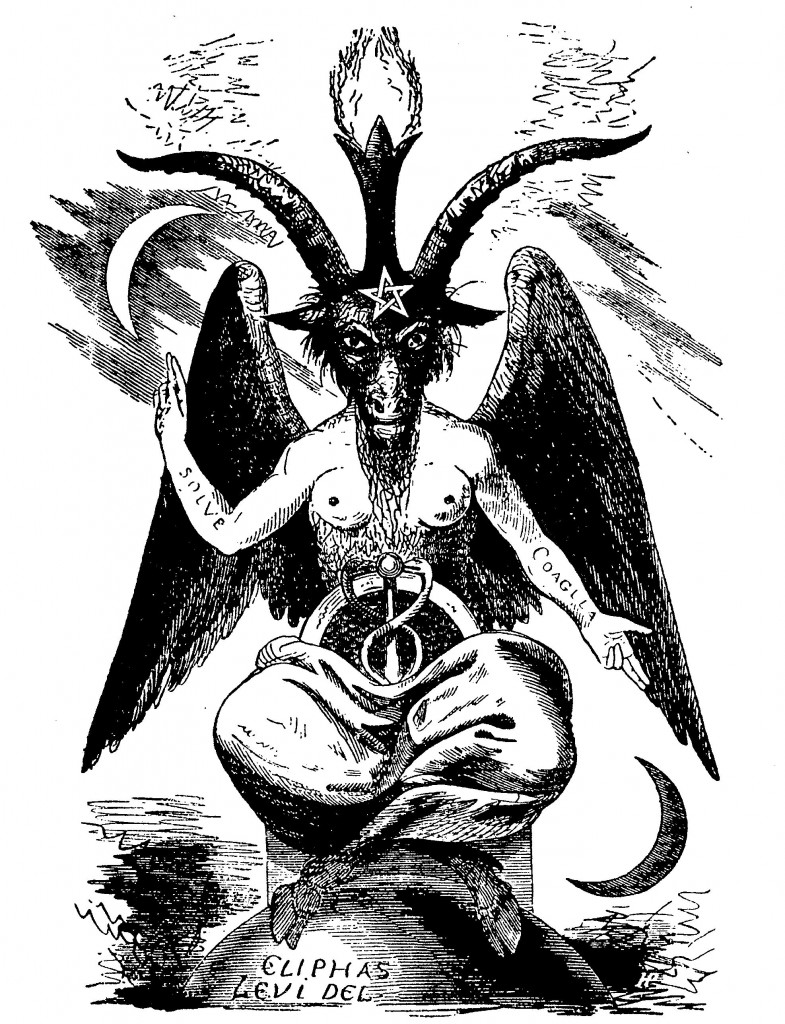 I’ve long toyed with the notion of taking up a different faith. I’ve eyeballed Buddhism, considered putting time into transcendental meditation and come to discover I prefer yoga with all the spirituality as opposed to the stripped-down stretching routine. But recently I’ve found myself drawn towards Satan – not the silly fictional devil in the center of the Earth, but the potent and powerful symbol for transgression. I’m not about to sign up for the Church of Satan and start donning robes (though that might be a tiny bit fun), but I do find myself drawn to the power that they have as symbols of Satanism. The inverted cross and pentagram are nothing but lines arranged in a certain order, but superstition and belief have granted them the power to strike fear in the heart of the believer. I get a childish kick from exploiting those silly fears. At six foot five, with my long hair and beard, I already stick out like a sore thumb. The supposed symbols of evil seem a fitting accent to a body and life like mine – and it is fun to watch people take furtive glances in the grocery store checkout line.

Perhaps my favorite image is that of the pagan deity Baphomet gesturing with his right hand to heaven and his left hand towards hell. The Hermetic words “as above, so below” often accompany Baphomet, suggesting a kind of symmetry to the universe. But I’m more fond of the notion of the left hand path (and not just because it was the name of a killer album by the death metal band Entombed). In this occult dichotomy it is thought that those who follow the sinister path to the left reject convention, explore taboo and question dogma. My grandfather took a tiny trip down the left hand path when he broke from the Catholic church, but he returned almost immediately to the right when changing his allegiance towards the Lutherans.

I feel like my life has been ever on the left hand path, sidestepping only occasionally to conform when convenience or the overbearing pressure of society made that road seem easier. I’m proud to have taken the road less traveled, to reject tradition and question the rules. I hope I have the will to continue down this road as I age and lose my willfulness.

One of my last memories of my grandfather is in Florida when he and my grandmother were summering away from Michigan. He doddered around the house, sharing stories whenever I slowed down enough to listen. He told me the proper way to bake sugar cookies and how to point a pistol so that it’ll always hit your target. The thing I remember the most, though, was when he met me in the hallway and told me that it was all right for two men who love each other to kiss. He took my face firmly in his hands and kissed me square on the lips, unashamed of his feelings for his grandson.

I will always be grateful for that loving, knowing nudge towards the left. 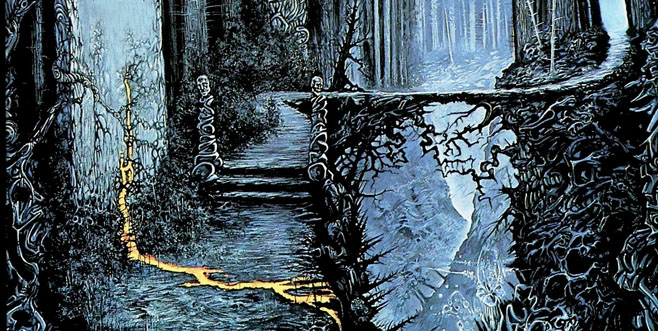 Pretension +1 is a weekly column about videogames and the ways that they intersect with our lives. Follow Gus Mastrapa on Twitter: @Triphibian.

The IGF is Just Fine – You’re the Problem