The game’s 12 new characters include fan favorites like Devil May Cry’s Vergil, Ghost’n Goblins’ Firebrand, Marvel’s Doctor Strange and the Immortal Iron Fist. The new characters do add more to the game than simply fan service. They balance the existing characters while they expand fighting potential. Sure, Vergil could serve as a sub in the cheap squad that is Akuma, Dante and Deadpool, but his teleportation move and lightning-fast strikes would work well teamed with a brute like Hulk and a shorter-range fighter like Arthur. 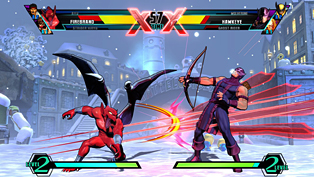 Of all the tweaks to the game, the new characters are Ultimate MVC 3’s greatest strength. Resident Evil‘s Nemesis is a powerhouse. Ghost Rider’s chain has a long reach and he’s a pretty quick fighter. Dead Rising‘s Frank West pulls an arsenal of everyday weapons from his jacket to pummel his opponents. He also has a rivalry with Spider-Man that serves as a nice touch. Nova feels like a space cop version of M. Bison, and that’s 100 percent OK with me.

Other characters like Phoenix Wright, Hawkeye and Doctor Strange may seem like fan service, but their playability is strong. Phoenix Wright doesn’t exactly punch and kick his way through the game so much as he motions, objects and calls his accident-prone secretary to assist him. He’s a really funny character and once players get into a rhythm with him, he’s a damn fine fighter.

Hawkeye translates perfectly into the game. With an array of trick arrows, he’s probably the best range fighter in the game. Poison arrows combined with his net arrow and quick shot of three arrows make him one of the more dangerous foes.

I’m still getting used to Doctor Strange. He’s a quick fighter and moves like the “Eye of Agamotto” can do some serious damage. Once you get the hang of them, the “Grace of Hoggoth” paired with the “Flames of Faltine” are really effective as well. Hopefully, my Defenders team will win an online match one day.

The new stages are mostly redecos of the existing stages. One in particular added a very cool fan service Easter egg – Metro City from “Days of Future Past.” There’s a poster in the background very reminiscent of the classic Uncanny X-Men #141 cover. It features all the characters from Marvel vs. Capcom 2 that didn’t make it to this game (don’t worry, Strider Hiryu is a playable character). There’s also a gigantic Sentinel lurking about in the background. It’s a fun sight to see. There are some great skins that pile on the fan service, too. Bucky Cap, Lyra and Doom 2099. They also threw Rob Liefeld’s Hawkeye in, so take that however you want.

The elephant in the room is that Ultimate MVC 3 is a $40 upgrade to an existing videogame. That’s a lot of simoleons, but considering 12 new characters alone would cost about $60 as DLC, maybe that’s not such a bad deal? Remember, Jill Valentine and Shuma-Gorath cost five bucks a pop as DLC for MVC3.

Don’t get me wrong, having The Defenders’ Doctor Strange, Hulk and Iron Fist battle Street Fighter‘s Ryu, Chun Li and Akuma is a blast. Ultimate Marvel vs. Capcom 3 is an over-the-top blast of a videogame. It’s a solid arcade fighter that’s packed with love for both Marvel and Capcom fans alike.

Now go make a team and beat the snot out of some strangers! On the Internet, of course.

Ian may not have the Horn of Gondor, but he does have a Twitter account. Follow him @IanGonzales and he will call you to arms against trolls of all shapes and sizes.

Games Should Make Us Smarter, Not Stronger

The Future is NOW! Sort of.