Unwinnable’s Dave Trainer was recently invited by Turtle Beach to test drive their new Modern Warfare 3 licensed headsets. Turtle Beach has teamed up with Infinity Ward to create the perfect set of cans for racking up those kill streaks. Dave’s hour and a half of testing gameplay and listening to explosions and falling shells casings was more than enough to know that Turtle Beach and Infinity Ward are a match made in heaven. He sat down with Sr. Manager of Marketing & Development Christopher Bridle to chat about these new headsets, the game and what’s next for Turtle Beach.

Unwinnable: With Modern Warfare 3 being released, what is Turtle Beach bringing to the game with these new headsets?

Christopher Bridle: These are Turtle Beach’s first licensed headsets. We really wanted to look at what more we could add rather than changing the paint job and slapping a logo on it. The first thing we did was focus on the look – we added a textural paint job to give it a war-torn look and feel.

We also gave Infinity Ward and Sledgehammer our technology and let them design the presets. In both the Bravo and Delta headsets, we have four presets developed by Sledgehammer for the single player mode. The next four were developed by Infinity Ward for the multiplayer mode. So the sound of this game is tuned exactly for how it was meant to be heard. The focus of the developers is on the person playing, and whatever mode they choose to play, the game is going to sound unreal. 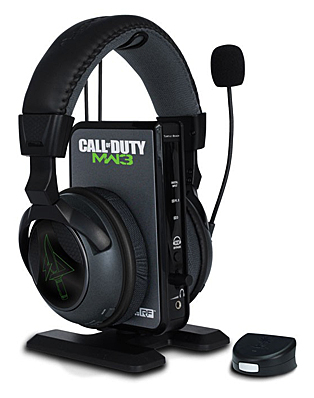 Unwinnable: The Delta headset is the predominant headset being released for MW3. What can you tell us about it?

C.B.: This is my favorite headset ever. The look, the feel, the sound has all been tailor-made for the ultimate MW3 gamer. These headsets will feature full 7.1 surround sound, 18 built-in presets and Bluetooth capability, all while being completely wireless for both the Xbox 360 and PlayStation 3. We also have 50mm drivers in these and all our MW3 headsets, so the sound is outstanding no matter what pair you decide to use.

We really wanted to work on making a headset for the biggest MW3 fan. With things like how chat and in-game sound are processed, the player can configure each to enhance the sound they want to focus on, like footsteps, shell casings or those huge explosions. We worked on reducing fatigue by implementing ear guard technology that automatically controls the volume of loud explosions and anything else blowing up so you’re not constantly adjusting the volume.

The biggest achievement is our Bluetooth attachment for our Xbox 360 customers, so now chat is fully wireless. Finally, there are advancements like chat presets, mic presets and downloadable content from our website – all custom made for MW3. It’s pretty amazing.

Unwinnable: Outside of the presets that come with the headphones, will Turtle Beach be offering any downloadable presets on the website?

C.B.: We will have a special MW3 section of our website and there will be more presets and extras. So both companies developed more than what is offered out of the box. That’s something we are really excited to give the fans.

Unwinnable: We know Turtle Beach is about detail. What types of details will fans get with these new headsets?

C.B.: We love putting something out that’s different instead of just a new paint job and logos. We went as far as having Lieutenant [Colonel] Hank Keirsey, military advisor for the Call of Duty series, record all the voice prompts for this Delta headset.

To take it even further, you will also be able to go onto our website and download other character voice prompts from the game like Soap, so you can customize that sound when you’re playing. Keirsey’s voice will only be on a limited run of headsets, so once they are sold out, they’re gone. It’s little details like that we have put into our products that we are excited about. 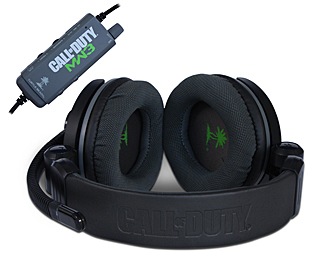 Unwinnable: What does Turtle Beach have planned for 2012?

C.B.: There are a lot of things going on right now. We have 27 different headset models and we regularly refresh them and add features. While I can’t go into specifics, we are developing a lot of new technology right now, so all I can say is that it will be a very exciting spring!

Unwinnable: Do you have any plans to work with any other companies to develop headsets for different games?

C.B.: Absolutely! With the release of the PX5 headset, we had great success with the Dead Space series. We were able to allow fans to download the first presets for a survival horror game.

I cannot comment right now as to whom Turtle Beach has planned to work with, but going forward into 2012, we will be releasing more and more presets for many more types of game genres. We are getting a lot of developer support right now, where they are getting more and more comfortable with our technology and really enjoying what we are offering. So it’s something we are looking forward to in the future.

Unwinnable: Final question (and this is for me). Right now, the presets are only available to PC customers. Are you going to open up preset downloads to Mac customers soon?

C.B.: At the moment it’s PC only. We understand the Mac community is dying for it. We get a lot of comments and feedback from customer support and social media, which is actually where a lot of our development for our headsets comes from. Support and engineering actually share a wing, so it kind of works out for our development cycle. [Laughs] But yes, we are developing for the Mac right now.

A big thank you to Christopher and Turtle Beach. The Modern Warfare 3 headsets are available now!