Turtle Beach’s Ear Force Z Seven is a PC gamer’s dream headset. The amount of fully customizable options, as well as quick on-the-fly audio adjustments from the wired touch controller, is outstanding. It’s a change that could boost your gaming performance and if you consider yourself a hardcore PC gamer, you may want to pay attention.

At first glance the Z Seven may look like just another release from a known gaming audio juggernaut, but a close examination will reveal one of the most elite headsets on the market for tournament gamers. Geared toward a PC-based platform, the Z Seven is fully endorsed by Major League Gaming, probably due to the immersive sound tech it uses. 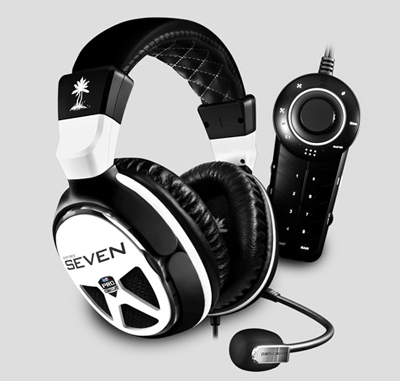 First time you strap these on, there’s an immediate, noticeable difference from other Turtle Beach headsets. The Z Seven is much larger and bulkier, but unlike, say, the Astro A50, Z Sevens are well-balanced and pretty light for their size. The headset sits a bit tighter as well, making good use of the padded faux leather ear cups and headband.

I was extremely impressed with the amount of detail Turtle Beach put into this headset ­– the stitching along the headband and fabric on the outside of the ear cups, for example. This is the most comfortable headset I have worn to date, even beating out the X42, which I though would never happen.

More importantly, the Z Seven feels sturdy and ready to absorb any rage quits you might hurl at it. It’s also a very quiet headset, with no distracting creaks or rattles. The controls are neatly bound to a digital signal processor, which initially reminded me of that old Atari controller with the numerical keypad before the quick realization it’s a good choice for competitive gamers.

The DSP, what looks like an undersized TV remote, controls every sound aspect of the headset, from adjusting chat volumes to mic signals and preset switching. It even controls surround levels and speaker angles, giving you every option to make the most of your game.

Using the DSP does take a bit of getting used to, but it pays off if you need to quickly switch settings for different games. (The belt clip on the back of the remote is a nice added touch, keeping the controller close and secure and not flying around your desk.)

Turtle Beach also takes a cue from Astro with the Z Seven, since it features removable speaker plates allowing you to brand your clan logo (or just dress them up however you see fit). The removable boom mic is also appreciated, so when you’re done gaming, you can fire up Netflix without the extension getting in your way.

I’d never used a Major League Gaming headset before, and I’m walking away from the Z Seven extremely impressed. Turtle Beach has once again delivered a product that produces at the highest level for serious gamers, though if you’re not interested in entering the MLG world they may be overkill.