Continuing in their recent tradition of brutal “board” games, Conquest of Nerath is Dungeons & Dragons’ newest entry into the tabletop strategy world. It takes the best parts of games like Risk and Axis & Allies and sets them in front of a 4th Edition backdrop in which you can set your sights on becoming the ruler of an entire realm. Instead of fighter planes, foot soldiers and tanks, your army is full of siege engines and creatures like skeleton warriors, storm elementals and dragons, each with their own attack dice and special abilities.

The gameplay is easy to pick up (especially when you are playing with a friend who has run the game before) and is in many ways easier to play than Wrath of Ashardalon and Castle Ravenloft. The idea is to move your monsters throughout the realms, conquering enemy territories while trying to protect your own. Combat is based on dice rolls and, for the most part, a six or higher hit will kill an enemy. Surprisingly though, consistently rolling higher than a six isn’t as easy as you would imagine. Event cards are drawn at the beginning of every turn, which will give you or your army a leg up. Whether it is bonus dice for your dragon’s attack or returning dead soldiers to the battlefield, every little bit helps on your path to conquest. 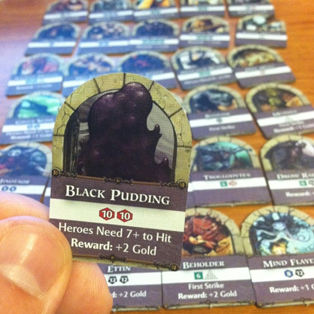 There are several different win conditions depending on how many players you have. The game is made for a maximum of four players and unlike Ashardalon and Ravenloft, you can’t combine map tiles and characters from other games. In Nerath, three is company and four is all-out war and whether you choose to play alone or ally yourself with another realm, the game takes at least three hours to play (not including set-up time). To really get the full experience of Conquest you need to take your time and make a night out of it.

One of the features I enjoyed the most was the dungeon exploration side missions. In each realm you can choose to send either your fighter or your wizard into one of the dungeons that are guarded by monsters like Beholders and Black Pudding. The dungeons are aptly named after classic fan favorite modules like White Plume Mountain and The Temple of Elemental Evil. If you can best the monster in combat you will net valuable treasure and resources to aid in your war effort; however, if you blow it you might lose some of your heavier hitters. Mid-combat quick dungeon delves easily become a high risk/reward situation that don’t always end well.

The game didn’t end so well for me, folks. After a couple of bad rolls against an ancient dragon and a few miscalculated attacks on my enemies, my goblin army ended up being the Pinky Tuscadero in a Malachi Crunch between the Vailin Alliance and Nerathian League. I hope to return to the gaming table soon with a hotter dice hand and a better battle strategy. Maybe this time I won’t ally myself with the Dark Empire of Karkoth. Either that or I will just stay out of the dungeons.

Conquest of Nerath, Dungeons and Dragons