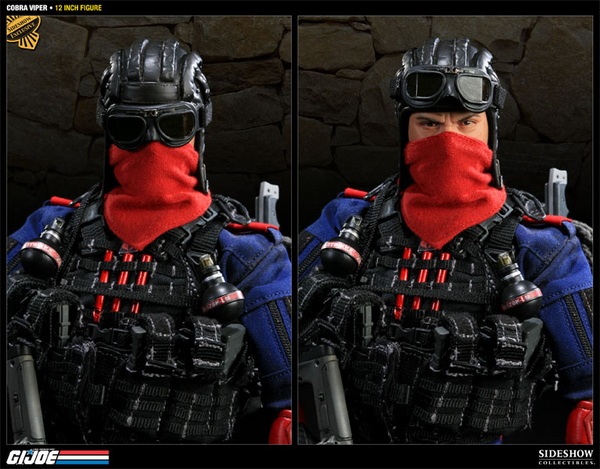 The last few months have been a blur due mostly to my projects with Unwinnable. We last left off at Toy Fair 2011 and after that I moved on to Pax East 2011 in Boston. Then after a bout with Pax Pox and a concussion, we flowed into the ground breaking Geek Flea. I got to see some great toys in between but I don’t always crave toys in the traditional sense of an action figure or robot. Sure, I just bought the exclusive version of Sideshow Toy’s Red Ninja from their G.I. Joe license and even though that is considered “adult” as compared to the 3 3/4” line, sometimes I want a piece out of the ordinary. While trekking across the interwebs for Coffee Break inspired links, I found something that goes against the grain almost as much as the people that inspire these “toys”. 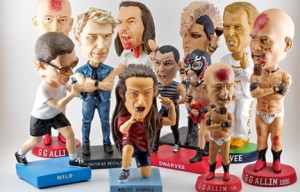 A company named Aggronautix produces a line called “Throbbleheads” that is similar to another line of in-action figures that feature bobbing heads. These have one distinct difference-instead of being modeled after sports stars or cartoons, they are modeled after icons of notorious punk bands. Some include the Dwarves and Andrew W.K., but I liked Keith Morris of Black Flag and Off!, Tesco Vee of the Meatmen, Wendy O Williams of the Plasmatics and of course G.G. Allin, complete with “tattoos, blood and filth” (a.k.a. feces). 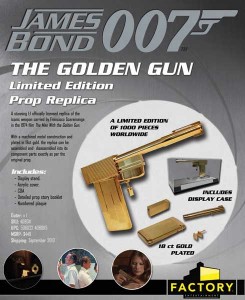 Every movie fan boy loves props. Here’s a set of teeth from Jaws (Richard Kiel) from the James Bond movie, The Spy Who Loved Me. While the metallic chompers look great, they really can’t hold a candle to the Golden Gun. I originally saw a version of this in the 1990’s, and like the current counterpart, all the pieces are separate and assemble into Scaramanga’s golden death giver. Both are made by Factory Entertainment and carry a hefty price tag. The Golden Gun creeps in at a little over $400.

Not bad ass enough for you? How about a life size replica of the plasma cutter from Dead Space 2. Channel your inner Issac Clark and get ready to light up some space demon scum. The cutter is modeled exactly after the video game version complete with flash light, cutter rotation and 3 spot lamp.

Now that I’ve touched base on things that Unwinnable founder Stu Horvath likes, I think it’s time for Cthulhu. I’ve seen Cthulhu inspired merchandise for years and one of the first items that come to mind is a pair of slippers. So, I dug deep across many web related links to find an interesting assortment of Cthulhu fueled wears.

First up is something I tripped over from a local artist. For $20 you can get your own Cthulhu Ski Mask. “The Cthulhu ski mask is a hand-knit bundle of evil warmth,” as said by the knitter of demonic creatures. Lovecraft is probably tempted to resurrect himself, with the help of Herbert West, just to keep his head warm during those long, cold winter months.

While it’s easy to find things like dolls, pillows and bobble heads, this next one really caught my interest. Be proud of your demon hunting heritage and show it off with the Head of Cthulhu. It’s about $25 and comes mounted on a plaque ready to adorn you trophy wall.

Finally, who would have thought that Cthulhu would have been helpful during a camping trip? Here is the handy dandy Cthulhu Hot Dog Roaster. It actually looks like the Punisher Hot Dog Roaster, but maybe Frank Castle was a Lovecraft fan all along. This item will be a hit at the next tailgate party. Think of the look on people’s faces as you load up some hot dogs and summon up a dark deity from the unknown.

It wouldn’t be right in my toy hunting heart if I didn’t mention G.I. Joe. I know, I already mentioned it and wasn’t going to talk about “action figures,” but after numerous passes on this newly announced figure, I had to take a plunge. I’m sure you can tell by now that I’m a fan of Sideshow Toys. I’m actually a fan of a number of 1/6th scale companies like Hot Toys, Heroic and Triad, but because I’m a huge Cobra fan, they have been getting a lot of attention from me lately.

Here is Sideshow’s newest entry to the ranks of Cobra; Cobra Viper. The Viper looks amazingly geared and the exclusive version comes with an additional head sculpt and helmet, giving it the appearance of a famous Russian trooper from an alternate faction in the lore of G.I. Joe. Maybe it’s actually supposed to be Mercer from Slaughter’s Renegades. Whatever the case, I would hate to make a bold prediction in April for my pick of the 2011 1/6th scale figure of the year, but unless they wow me with a Zartan or Major Bludd, I think it’s safe to assume that this figure will win hands down. Also, at $134.99, it’s the most expensive G.I. Joe figure from Sideshow to date.

Coffee Break: Duel of the Fats