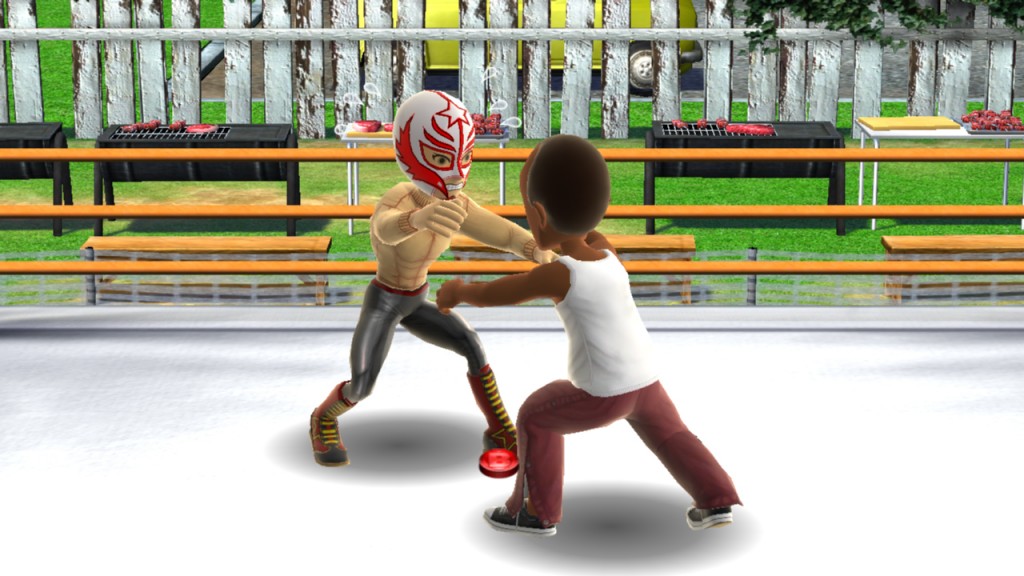 We sat down at PAX with Microsoft Japan’s Taro Hiwatashi and got a demo of the upcoming Fire Pro Wrestling for Xbox Live Arcade.

Don’s Thoughts: This being the first 3D game in the Fire Pro franchise (we’ll pretend 1996’s Iron Slam never happened), there were some tweaks to the grappling engine. For example, instead of an automatic grapple, you press B to engage in a close grapple, or LT+B for a far grapple. In that respect, it’s similar to the AKI engine that drove the Virtual Pro Wrestling series WCW vs. nWo World Tour and WWF No Mercy. And while Hiwatashi seemed taken aback when I suggested that, it is probably one of the few things that isn’t Fire Pro about this game. The animations and wild moves are still there – case in point, Ken and I traded Spiral Bombs and forward Russian Legsweeps during our brief time with the game. The game’s signature humor is there as well; in much the same way as the anime schoolgirls were the toughest characters in Fire Pro’s CPU Logic modes, Hiwatashi informed me that one of the toughest NPCs in this game is a grandmother.

Of all the Fire Pro games this is probably going to be the easiest for a newcomer to pick up and play, simply because there is a ton of on-screen feedback to tell you what to do. Given that this is an avatar-based game meant for quick play, this isn’t a surprise. Case in point: our own Charles Moran and Dave Trainer, neither of whom has played Fire Pro before to our knowledge, did a pretty good job for themselves against Hiwatashi and another player.

Ken’s Thoughts: Don Becker and I are the pro wrestling guru’s of Team Unwinnable, so when we heard that Xbox Live Arcade had a playable version of Fire Pro Wrestling, we moonsaulted at the opportunity to play it. When I got to the booth, Don was already embroiled in a fierce competition with Microsoft Japan’s Taro Hiwatashi. And yes, he did seem taken back by Don’s comparison to the great AKI wrestling games, but I understood where Don was going with his reference.

I am eagerly awaiting this game for a number of reasons. First and foremost, there hasn’t been a good wrestling game since the AKI days. I’m sure a lot of people will give me flack for that comment, but how can you take the THQ arcade wrestling fighters seriously? While the new Fire Pro may not be the successor to the AKI games, for hardcore wrestling fans it will give THQ a run for its money.

The game has been revamped from 2D and is the first 3D title in the Fire Pro series. It is easy for a casual gamer to pick up and have fun, but also boasts some cool features for the experienced player. As Don said, it uses avatars and Hiwatashi made sure to tell us that it will also use your avatar’s prop in its entrance to the ring. It also has RPG-like features that enable you to gain experience points and distribute them to your character’s different abilities.

Fire Pro is also known for its ridiculous amounts of hidden wrestlers. Previous games have boasted over 600 wrestlers from all over the world and have even included guys like Hulk Hogan and Ric Flair. While I didn’t get any info on who would be appearing in the game, Hiwatashi did go in depth about the Create-A-Wrestler mode. Essentially, you can build anyone, albeit in avatar form.

@UnwinnableDonB and @UnWinToyHunter are going to headline Fire Pro Wrestlemania in scenic Nutley, NJ someday. Tickets available whenever you see them.