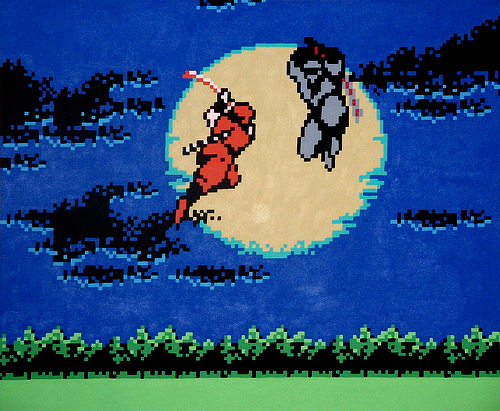 It was on Tuesday that I began to notice an unusual phenomenon moving through the crowds at GDC.

Occasionally, while walking through the halls from panel to panel, I would see a group of CAs (conference associates; the volunteers, mostly students, with the bright blue ‘I Can Help’ t-shirts who assist in managing the day to day business of the show) clustered in a circle. My initial thought was that they were playing hacky sack or some other similar nonsense, and steered clear – witnessing large groups of people making asses of themselves makes me uncomfortable.

After the Independent Games Festival/Game Designers Choice awards on Wednesday night, a much larger circle formed, this one producing much shouting and laughter. The CAs seemed to be dancing in slow motion and everyone involved had the air of desperate, clenched teeth ‘fun’ that seems to go hand and hand with weirdo hippie cults or high school drama clubs.

I asked one of my fellow writers what they were doing and he simply shook his head and said, “Nerds being nerds.”

Of course, it turned out to be a lot more interesting than that.

I found the real answer at the end of the Experimental Gameplay Workshop on Thursday afternoon. After a series of provocative demos by many people smarter than I (more on them down the line!), one of the moderators coaxed the panel to join some CAs in a game of Ninja and explained the game as they played. 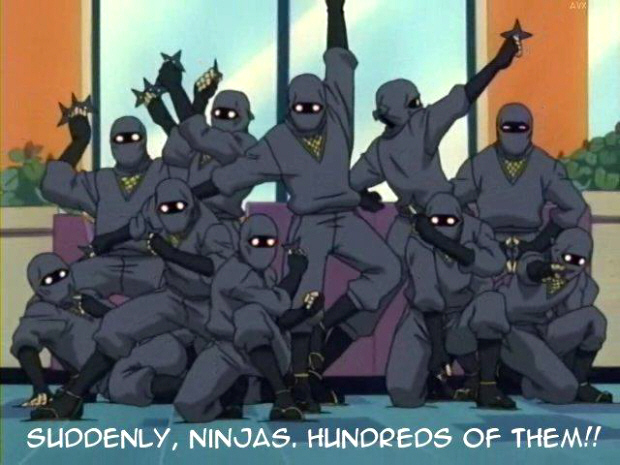 Play begins with a group (optimally 6-8 players) arranged in a circle at arms length. At the cry of 3-2-1-NINJA! everyone jumps into their most dramatic ninja pose. Play proceeds clockwise, with each player making an attack. You eliminate opponents by chopping or otherwise hitting their hand and on your turn, you may only make a fluid motion in one direction. Upon completion of your move, you must hold your last position – if you wind up falling down, you have to stay down on the ground. Defending players are allowed to dodge with their upper body but can not move their legs. Play continues like this until only two players are left, at which point they stand back to back and, at the countdown, jump into poses again. Their duel continues until one is eliminated.

As the play progressed, and the new players became more accustomed to the mechanics, the game became a staccato combat ballet, culminating in the final one-on-one duel which was almost as impressive as an actual martial arts demonstration. Also, the crowd, which seemed standoffish at first, quickly invested in the display. Ninja is a crowd moderated game, meaning that onlookers have the final say if there is a point of debate. This encourages players to be dramatic and showboat, which in turn engages the audience more.

As an onlooker, I found myself extremely interested in how videogame mechanics fueled not only the mechanics of Ninja, but its over all rhythm and aesthetic. The moderator mentioned the early film experiments of the photographer Eadweard Muybridge, but I saw Battle Chess and Final Fantasy and (to a lesser degree, strangely) Mortal Kombat and Street Fighter. There’s even a smidgen of Assassin and Dungeons & Dragons to be found in there, which essentially brings the evolution of gaming full circle.

What does it all mean? I am not sure yet. I do know it was exciting to watch once I knew what was going on. At the Kill Screen party Thursday night, as I made my way to a taqueria to soak up the Scandinavian liquor, a crowd had gathered near the door, the appeal of slow motion drunken kung-fu apparently impossible to resist. It quickly spilled out onto the street, and I think I saw someone from Naughty Dog in the circle.

If Uncharted 3 has a Ninja sequence, you’ll know why.