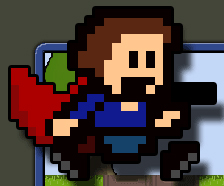 Earlier in the summer, I called out to Team Unwinnable to find out what classic games they most wanted to see remade. The result was supposed to be a nice list style piece, but then Chuck said something along the lines of, “I would rather have something new like Shadow Complex than a reskin of Bad Dudes any day.”

With that remark, the piece died on the vine, but I also started to realize something – that a growing number of downloadable games, Shadow Complex included, are more creative, compelling and visually exciting, by a large margin, than many of their big budget counterparts.

I theorize that this is largely due to economic factors. A-list games are made in a way that has much in common with big budget movies. With huge amounts of money at stake and countless people involved, it is easy to imagine how a strong, singular vision can be drowned amidst a sea blandness concerned with maximum market share. In contrast, a smaller project has proportionally fewer dollars and people involved, less risk and, therefore, more freedom to push the creative envelope. It’s a theory, anyway. The ins and outs of the business end of the industry admittedly hold little interest for me, so I have no idea how accurate this may be.

The whys and wherefores aren’t important. The truth is obvious in the games themselves. 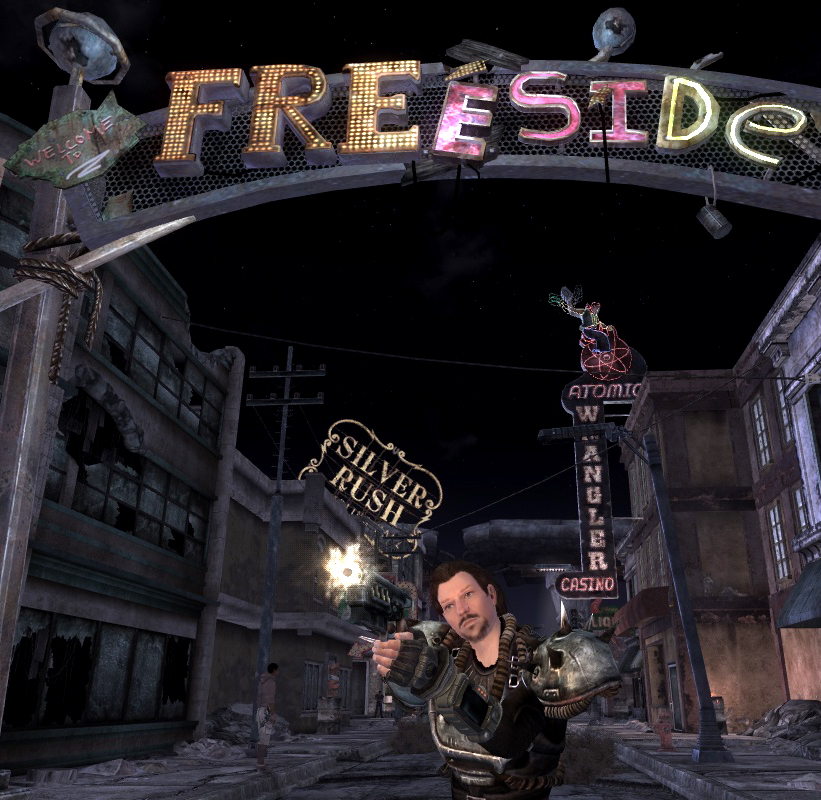 Take Fallout: New Vegas, a game that, for many, is the most anticipated of the holiday season. I, on the other hand, had a 30 minute hands-on with the game at E3 and left unimpressed. None of the subsequent promotional materials have inspired much hope that my opinion will change upon it’s release.

I blame this largely on the lack of stimulating visuals. Somehow, the makers of New Vegas have taken the brightest, most garish on the planet and managed to suck all the color and energy out it. I know, it is a post apocalyptic world, “it’s supposed to be bleak.” Says who? The original installments in the series, though also having a predominantly brown and grey color palate, defined the post apocalyptic aesthetic with out ever feeling so exsanguinated. I would like to see the videogame text book that has the following equation:

That 79% is what makes New Vegas and Fallout 3 before it so visually unstriking. It is neither colorful nor truly colorless, a bland graphical gruel. 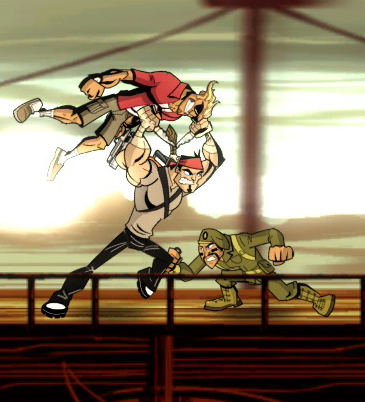 You don’t have to go far to find downloadable games that push their art direction forward, in either direction. Limbo, from earlier this summer, redefined bleak with its haunting, colorless world. On the other end of the spectrum, Shank‘s boldly colorful cartoon stylings are more vibrant than any recent high profile title that immediately comes to mind.

While the visual language of big releases is a slave to realism, their mechanics are rigidly filed into genre-specific categories bereft of significant experimentation. The biggest gameplay innovation in recent memory is Red Dead Redemption‘s follow button (admittedly, for such a simple thing, it had a major impact for me – other games now feel somehow wrong for not having it). On the other hand, games like Flow and Braid on consoles and Sleep is Death and I Wanna be the Guy on the PC routinely question the nature of games through their mechanics.

And that’s just a few titles off the top of my head, there are hundreds out there and, with shorter production cycles, dozens more every month.

A growing number of critics have begun to wonder whether the game industry can hope to sustain a business model so focused on producing blockbusters. There was a time when I laughed at the idea that the big tent pole videogames like my beloved Mass Effect would become a rarity, but in the face of the recent spate of quality indie titles coming to the marketplace, titles that handily outstrip so many of their big budget counterparts in terms of creative integrity and urgency, I can’t help but entertain the notion that the indie download may be a bigger part of the future than anyone had previously counted on.

Tune in next week for my exhaustive round up of all the downloadable games I’ve been playing over the last couple months and see if you still scoff at the idea that the era of the videogame blockbuster may be coming to an end.