The nod to the works of comic artist Moebius and Studio Ghibli’s Nausicaä of the Valley of the Wind made Sable one of my most awaited games. Then, experiencing the solitude of the vast Midden desert filled with ruins and aimless exploration turned Sable into one of my favorites. But the real cherry on top was its sci-fi landscape, which gave a much-needed transformation to desert worlds popularized in sci-fi media such as Dune or Star Wars that trespass into the irksome culturally representative territory.

This idea of ancient structures and futuristic machinery is common in Dune and Star Wars – even Sable included the massive Wyrm and speeder-like hoverbike – but the game set itself apart with its multifaceted environment and sincere narrative. Although Midden is an extension of Jakku, a desert planet from Star Wars The Force Awakens – filmed in the Rub’ al Khali – it’s the least concerning desert planet from the series, with giant vessel remains scouring the terrain, metal scraps, and encampments inspired by nomadic tents.

Even in recent films, futuristic and technological Southwest Asian and North African (SWANA)-based deserts get painted as wastelands and war zones while leaving people from the region out of the story. Dune’s contentious, spice-filled planet Arrakis’s essence exoticizes Islamic stories, clothing, language, and regional culture, even when filmed in the Wadi Rum desert of Jordan. Also, numerous desert planets and moons in the Star Wars series were set in Jordan and Tunisia, but none was worse than Star Wars Rogue One. Also filmed in Wadi Rum, Rogue One showed a moon called Jedha – similar to the Arabian city that sits near holy pilgrimage sites for Muslims – that unsurprisingly had a Holy City and was considered a war zone with terrorist activity. Eventually, Arrakis’s city and Holy City get blown to bits by merciless, resource-hungry empires. I’ve been critical of these futuristic deserts for their surface-level political commentary on imperialism and their attempt to represent the SWANA countries without affiliation. Those faulty worlds of Dune and Star Wars are absent in Sable’s sandy waves that hold secrets to uncover ancestral lore and adventures rather than an ulterior purpose. 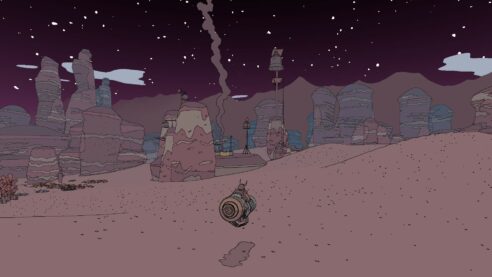 Sable isn’t perfect, but the identity it develops around the sci-fi desert is better than what Dune and Star Wars have visually achieved. The Bedouin tents, minaret-like structures, clay buildings with protruding wooden beams, and mosaic walls in the oasis city of Eccria are paired with unique flora, adorable Chum creatures, inspirations from the Arizona desert, and various architectural styles – at least layering different desert-based concepts. Sable’s inclusion of NPCs with names like Hamza, Zayna, Bashir, and Hilal wasn’t bothersome because they were interesting and a core part of this emotional and deeply personal narrative. Here, inspiration understands a boundary and doesn’t fall into stereotypes.

The lack of life-sustaining water, the stillness of barren deserts, and monumental rock formations create an alien aesthetic, but the planet forms an identity when you add people or ruins of civilizations. Sable created its own identity with a brown-skinned main character where the objective of collecting masks is a meaningful aspect of meeting Midden locals, the magical floating ability pushes for further exploration, and her Gliding journey is about self-discovery. Along with the environment, this premise makes a world of a difference in how the alien desert is portrayed.

Games, Made of Lines and Vines

Videogames are NOT art… and why should they be?