Poetry is misunderstood and under-appreciated in the United States, and that’s partly due to its fluctuating nature. Most definitions of the form are watery at best, dragging in terms like meter, rhyme, caesura, stanzas, requiring nothing but often operating most effectively when sticking to rules and conventions, flouting them explicitly, or busting out into completely free verse, and often all of the above in a single poem. They can be short, even just a single word, or epic in length as with the classics or contemporary novels in verse like Anne Carson’s Autobiography of Red. They can seem incomprehensible, feeling like little lock boxes with the key flushed into the sewer, or at their best, when great poems strike our third eye open and give meaning to this often chaotic and unbearable life, even if only for a moment.

But it helps to start somewhere, and I like to start with poetry as expression. Even this basic setup can be intimidating – as a writer, examining the self and attempting to put it into language puts us dangerously close to being seen, or worse, misinterpreted; and as a reader, poetry often asks us to a more direct role in the making of the meaning of these words, where we must interpret, intuit, trust what we’re drawn to and investigate that which maybe confounds us at first. Between writing and reading poetry, writing is often the easier act, if only because we can write for an audience of one and be content with our creation. Reading poetry is much more challenging and often topped with additional pressure of feeling like we read something incorrectly, which is why I believe it’s the lesser utilized aspect of the form, much to detriment of most of us.

Reading poetry is critical analysis, which is why poetry is more often taught at higher levels of English instruction. It’s hard to test for critical analysis, because it can’t be graded on a bubble sheet – someone has to read the student’s essay about a poem, consider their assessments and determine if their analysis was clear, and from there, appropriate, meaningful or insightful. Outside of a testing environment, if a poem doesn’t at least have a few lines that effectively hook a reader, they won’t stick along to think about much else. We first approach verse that reflects ourselves, and sufficiently baited, can be led to larger modes of thought, and peeling apart layers with confidence that what we are drawing from the poem can indeed be found plainly on the page. So when I’m asked, as a poet, if I’m worried that people won’t get what I’m trying to say, I respond that of course this worries me – I desire to be understood. But at the same time, there’s an even sweeter thrill when a reader unthreads meaning that I may not have intentionally braided into the work, but to collaborate with them towards something that surprises and astounds us both can be uniquely intimate.

But this requires readers, and as stated, choosing to seek out and read poetry is often not the first experience with the form for many people. They’re assigned something confusing, asked leading questions, instructed to read slowly and carefully as if examining a crime scene looking for clues. Reading poetry becomes work; writing poetry is meant to be freedom unbound.

I think about this dichotomy a lot, which I have no data to back up, so maybe I’m wrong. But it comes to mind usually when folks learn that I’m a poet, or at least I went to school for it, and they either tell me that reading poetry is too hard, or they’ve written some poems and would like to know what I think. I’m always happy to read anyone’s poetry, but it’s often clear that they haven’t read much poetry. I’m not out here trying to say you have to “do the work” of reading before you’re allowed to write, by all means writers should unburden themselves and put pen to paper however they see fit. But while I’m pretty sure I could run a paintbrush over a wall and call it a day, my housepainting would be much more appreciable if I’d watched a few tutorials, learned a little about color theory and really considered what makes a great paint job before just strolling into the hardware store. 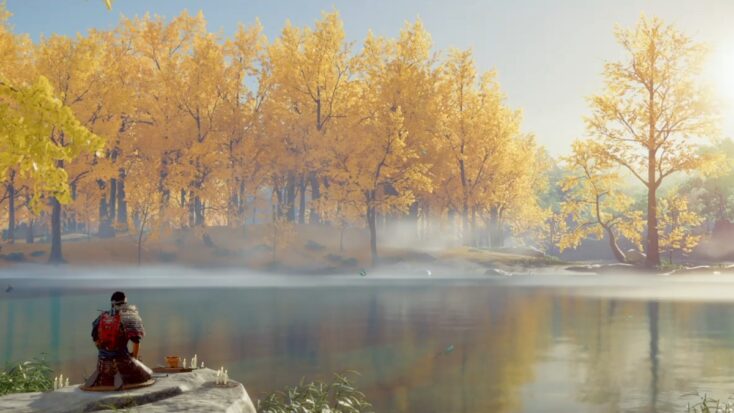 This rant was meant to be more of an introduction to a piece about Ghost of Tsushima and how it asks players to compose haiku in a handful of scenic visas, as well as the very end. Despite this failure of a pithy preamble, my original assessment of these haiku was appreciative frustration. Haiku in English are already hamstrung by our daisy-chained language, brimming with conjunctions, prepositions, articles of all sorts, words pulled and mutated from other languages and inconsistent application of adjustments for tense and plurality. As pulled from Japanese, Haiku are more agile, given that the language can do more with seven or five syllables. As such the relationship between English and Japanese haiku is not one-to-one. Luckily, the game allows you to break this rule, not forcing the player to choose the “right” lines, deftly refusing to grade or claim that there is a perfect haiku.

There isn’t really a tutorial about what makes a powerful haiku, nor many examples to just sit down and read within the game. The vistas for writing haiku in Ghost of Tsushima are found in scenic areas secluded from the war. As such, they’re ideal for haiku, which traditionally focus on nature as the subject and often the driving metaphor of the verse. Like most poems, there is the surface of the haiku, and the iceberg of meaning underneath. The surface is not superficial; the language must entice the reader to dive further. Though most of the game treats these moments as just another chore on the map, I was touched to find at the end, before an unflinching culture of honor and obligation forces you to battle your uncle and surrogate father to the death, both Jin Sakai and Lord Shimura sat down to reflect on the moment through haiku. At the precipice of an impossible decision, you compose some lines, ink your brush and put language to paper.

While I found the act of writing at this point to be invigorating, I was disappointed that the verse couldn’t be shared. Ghost of Tsushima prioritizes writing haiku over reading it, saving your lines but beyond the typical modes of screenshots and sharing outside of the game only prioritizing what you have written, not offering something even like the absurd poetry of the multiplayer messages found throughout the Dark Souls games. Thus I found the haiku in the game honestly reflective of poetry’s place in culture at large – prioritizing the purely introspective, disregarding of community and empathy.

This might have been where I’d left things, had I not remembered to inquire with my friend and fellow poet R. A. Villanueva. I knew he loved the game, and asked him to share his thoughts on the haiku experience. In his response he reminded me that, despite how I may feel about the state of reading poetry, I shouldn’t bemoan the gift of writing it. Better to write a haiku in Ghost of Tsushima than to have not written at all. Who knows where the leaves may lead.