This is a reprint of the letter from the editor in Unwinnable Weekly Issue Thirty – check out the excerpts at the end of the post. You can buy Issue Thirty individually now, or purchase a one-month subscription to make sure you never miss and issue! 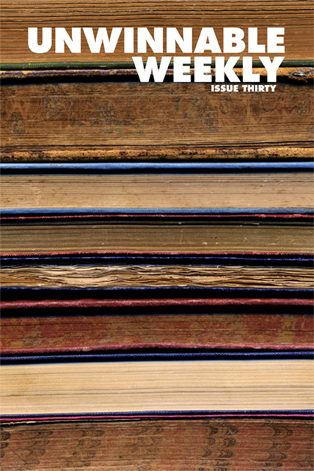 I really was going to write about something else here, but since all I want to write about lately is Dungeons & Dragons, why should the Letter from the Editor be spared?

A stupid story from a Dungeons & Dragons campaign, circa 1998:

It was the very first dungeon of the very first game. The party was sent to retrieve a sword that was now in the possession of some people who made their home in a temple dedicated to a minor demon. Not nice folks, in other words.

Several years earlier, I had gotten an issue of Dragon Magazine which contained one of the best things ever: an expanded list of effects for the magic item known as the Bag of Beans. Plant a bean, something happens. Usually, that something is bad. Sadly, the entry for the item in the Dungeon Master’s Guide only had 7 possible effects – not exactly smorgasbord of random mayhem. In comparison, the Dragon Magazine article had a full hundred. I’d been waiting a long time to make use of that table.

The party found a Bag of Beans in some drawer or another.

It took them until the very end of the adventure before they succumbed to what I assume was tremendous temptation and planted a bean in between the flagstones of the tunnel they were in. They rolled a 26:

The planted bean summons a meteor from outer space that strikes the ground within five rounds. Anyone standing directly over the bean (the point of impact) is instantly killed, and all his items are destroyed. Only a wish can restore him to life again. All creatures within 30 yards receive 10-40 HP damage (save vs. breath weapon for half damage). A crater 10 yards in diameter is left behind.

Now, since they were underground (and wondering why nothing had happened) they had no idea a meteor was screaming towards them. On the other hand, being underground saved them from the terrible destructive power of the meteor. It didn’t save them from the cave in, though.

And it wasn’t a meteor. In a fit of pique, I changed it to a gigantic, catastrophic bean bag chair.

Only the thief survived, because he wisely wanted nothing to do with the bag and got as far away from the planted bean as possible. Thanks to him, the rest of the party’s bodies were recovered by a construction crew and brought to a priest for resurrection. Learn from their mistakes, folks!

In this issue’s cover story, J. Stephen Addcox looks at the poetry of videogames. Joe Parlock discovers how the subculture of gaming has its own folklore. I ponder the impact of Dungeons & Dragons on videogames and how it is both a work of genius and a pretty terrible game. Finally, Andrew Gray examines his impulse to select the female character in videogames – with surprising results.

Have a good weekend and holler if you need me: stuhorvath@unwinnable.com.

A good example is Mr. Bones’ Wild Ride, a story originating on 4Chan in the form of a “greentext” (short, bullet-pointed summary of a larger story) combined with screenshots from RollerCoaster Tycoon. “Mr. Bones’ Wild Ride” tells the story of a roller coaster that takes years to complete a single loop; it has been passed around various online circles and through social media countless times. Mention it in any gaming-related space and it’s likely to be recognized by at least a handful of users.

The D&D rules, created by Gary Gygax and Dave Arneson, were preoccupied with simulating the minutiae of real world combat through graduated mathematical representation combined with an element of randomness provided by dice. This is insanely ambitious, akin to creating an analog, handwritten version of a videogame engine.

When my poem was chosen, it seemed as if my creative effort would become something significant to thousands of other players, but my exuberance was tempered when I finally got the chance to play the game. In the community neighborhoods there was a small lecture hall, out of the way, and in that lonely room my poem sat in a book upon the lectern. It’s there even now, in Uru’s current free-to-play iteration, Myst Online; I went back recently and was struck by the game’s emptiness and my poem’s position, hovering on the margins.

I moped over to my game collection and picked up the first title that caught my eye: the original Resident Evil. After starting a new game, I opted out of selecting Chris Redfield as my character and, as I did the previous time I played, went for Jill Valentine. Something suddenly occurred to me then: when choosing an adult character and given a binary choice of gender, I almost always pick a woman.

“Why Do I Want to Be a Woman?” by Andrew Gray