Picture the scene: the torch-and-pitchfork mob bursts into your room, holding the dread artifact you thought lost in the couch cushions forever. They demand that you explain the purpose of this abominable shape and what infernal dialogue you’ve opened through the use of its unholy angles. The object in question is a 20-sided die.

The morally panicked believe you’re summoning demons, communing with Satan, or placing hexes and poxes and curses upon the unwitting. Can you imagine your sheepish protests? Your faint disappointment at how the mob thinks you’re doing something that is, objectively speaking, way cooler than what you’re actually doing?

Commissioned for the 29th issue of experimental game bundle/zine Indiepocalypse, Apocryphauna taps into just such a disconnect, grounded in the sort of hysteria that once surrounded dungeons, dragons, heavy metal, and various trading card games. For this short adventure, the fears are reasonably true: Apocryphauna cards do let their collector commune with an extradimensional being. The destruction of all things might even follow as a bonus.

The collecting and communing is our protagonist’s immediate rebellion against the religious boarding school where they’ve been deposited, a last resort punishment by way of a conversion camp. The opening screen has me define the character’s gender only for a nun to say I’m mistaken and that’s part of why I’m at the school to begin with.

We view the school in first-person through the fog of early 3-D’s limited draw distance. All NPCs are represented by tall 2-D sprites, which makes severe nuns and uniformed students alike resemble cartoon cardboard standees. In a parody of Christianity, the usual crosses and crucifixes are instead the “unifix,” which uses the Roman numeral for the number one to represent the one Lord, who is number one.

The one Lord, however, apparently has better things to do than stop the scavenger hunt for a forbidden trading card collection. A few cards sit more or less in plain sight, their reddish-purple backing distinct against the school’s drab polygonal concrete. Other cards require us to talk to students, who will tell us to fish around in a bathroom trash can, or to move a loose brick by that one poster over there, or to go fetch some tacos first because the information isn’t free. 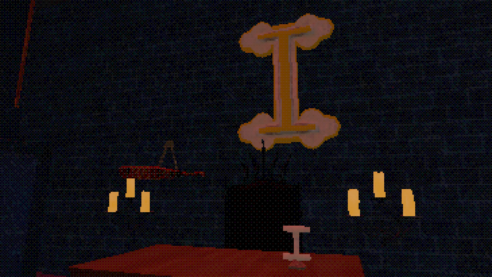 What stands out to me is not the element I expected, given how frequently I encounter it: the lo-fi HauntedPS1 graphics enhance the atmosphere and mechanics to such a degree that they feel like an inseparable feature rather than a trendy stylistic choice. The game features multiple floors with multiple rooms, all populated by the bare minimum of objects needed to distinguish them. Nevertheless, each space feels coherent to me even though they might seem more confusing and empty and even abstract at a glance. The few details I can surmise are doled out in such a way that they feel like purposeful aids – the tacos I’m looking for are the only identifiable foodstuff in the lineup of cafeteria sludge; lockers are undecorated except for a tiny butterfly sticker to mark the one I’ve agreed to hastily and discreetly empty of contraband.

There’s no shimmering node on interactive objects, no quest marker, and no quest log. Admittedly, that perhaps speaks more to the game’s limited scope (it’s short and must be played in one sitting, since there’s no save function). But regardless of intent, it stands in such stark contrast to the many more detailed games I’ve played in my annual end-of-the-year scramble through all the media I’ve missed.

The most expensive, highest-profile games pile on details, shooting for something close to photorealism. But left unchecked, such details become the equivalent of brush growing over and obscuring a forest path. What we can and can’t interact with becomes harder to parse at a glance; the details become noise, made in misguided pursuit of looking “real” yet failing to reflect the smooth, intuitive motions and thought processes with which we carry out everyday tasks.

In that sense, searching the simplified environments of Apocryphauna feels truer to the human experience than squinting at all the hyper-detailed rooms in something like The Dark Pictures Anthology. The most extreme example of this disparity is in Faith: The Unholy Trinity, whose style evokes the Commodores and Ataris and early DOS games of long ago. Everything about Faith is sparse, with character sprites that could pass for stick figures. The environments are recognizable yet limited, populated by objects often drawn in a uniform color as if to underscore the fact that they’re just scenery. As a result, I can read the environment immediately. I can tell that, say, the kitchen cupboards hold nothing, whereas a game made with more modern aesthetics would compel me to rub my avatar up against every drawer or cabinet that crosses my path just in case a little “interact” prompt appears.

Even when the polygons accrue more detail like in Signalis, the result is similar: I sense that the objects being highlighted are things I am meant to see, that serve some larger purpose than to fill space in futile pursuit of realism. The game directs my eye so much more effectively than the typical practices of explanatory companion characters or big, obvious markings around any point of interaction. My engagement with the world feels so much more natural, despite how otherwise un-natural the overhead camera perspective is; if anything, it helps by obscuring certain details without harming my ability to read and recognize the space. 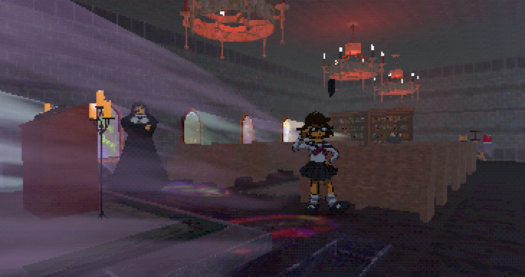 This is all a long way of saying that Apocryphauna’s lo-fi style allows it to direct the eye with minimal distraction. When I play the game, I am looking for one thing as well as anything that can help me acquire more of that one thing. It creates the feeling of a lone obsessive who cares a little too much for their passion, even in a world seemingly designed in the image of Pokémon or Yu-Gi-Oh!, where one pastime has supplanted all other pastimes. Everything funnels and feeds toward the uber-hobby of this one card game, which we never actually play.

And rather than seeming like a bizarre oversight, the lack of sit-down, deck-shuffling sessions of a card game feels consistent with that broader, obsessive feeling and the story it tells. In a technical sense, of course, it’s a sensible design limitation relative to the game’s size. It also works for comedic effect, allowing the cards to reference comically improbable rules that it never has to put into practice. But most of all, it reinforces the protagonist’s sense of isolation as not just the new kid but the lone sufferer of a specific internal conflict (well, the only sufferer who’s out and about; there’s another kid struggling with gender identity locked in the basement detention cage). None of the students treat them badly, but still: liking the thing that everyone else likes has hardly closed the social distance.

To me, the isolated and lonely underpinnings of Apocryphauna feel the truest. I grew up that way, fumbling to find common ground with peers in a small town. Even when I found it, it never lasted; if people didn’t move on to other hobbies and other people, their attentions would wander. They didn’t care about the things I cared about in the same way. The specific hobbies and activities of mine would change over the years: cards, art, manga, piano, writing, old movies. The isolation, however, would remain: the weird, tiny agony of a niche pursued alone.

I remember seeing evidence of the similarly devoted. Stores and magazines and internet postings spoke to the existence of a wider community. But from where I stood, I could never find a way in. I couldn’t will a community into that town, and in fact the opposite seemed to happen as stores closed and magazines disappeared from shelves. In Apocryphauna, though, that’s exactly what I do in the end – I light the candles, draw the summoning circle, and reach across the void to find it at last: a companion.

Steven Nguyen Scaife is a freelance writer and editor who will not pick a pop culture lane. He and his cat are marooned in Ohio still.