I didn’t expect to like Dragon Age: Origins. I’m easily exhausted by Tolkienesque fantasy, and my RPG preferences have always skewed more to J than to W. But eventually enough interesting people said enough interesting things that I became – well – interested. It was in the human noble origin story that I met the hero, Virginia Cousland, who is one of the most fascinating protagonists in videogame history. I didn’t realize that when on the character creation screen; I wasn’t making character design choices to reflect anything in who I wanted her to become, I was just throwing together a character for a game I didn’t think I’d play. But the warden commander turned into one of the most memorable and layered characters I’d ever played because she was so unlike most videogame protagonists: she was so unlike me.

Virginia was the second child of one of the highest noble families in Fereldan, although she certainly didn’t look it. She was clad in filthy, rust-coloured armour. Her hair dangled unevenly past her neck in tangled ropes of fire, framing a sunken and jagged face. She had a sharp tattoo the color of dried blood slashed across her right eye. Her only company was a fat, mud-colored warhound named Chugg. Her nobility was the sort that could be judged by the edge of her canines, not by a family tree. And yet… it was the older brother who was sent to the front lines to command the house’s troops. When a lower lord staged a coup against her family, her father was who she was expected to grieve for, not her longbow-wielding mother who died covering the escape route. I felt like there was something “off” about the way the world treated Virginia.

She was a natural leader and an expert in using a five-foot stick of sharpened metal to turn people inside out, skills that were greatly valued during the Blight. Sure, people were often amicable toward her, but everyone she met would slip in some comment about her gender when they introduced themselves. New party members remark on how odd it was that she could be both a woman and a Gray Warden. This is a game that claims right on the character creation screen that men and women are treated as equals and are equally represented in all walks of life; yet soldiers under Virginia’s command still felt it was okay to treat her womanhood as an oddity. NPCs trying to make a good first impression complimented her beauty while other women of power kept reminding her of how special she was. 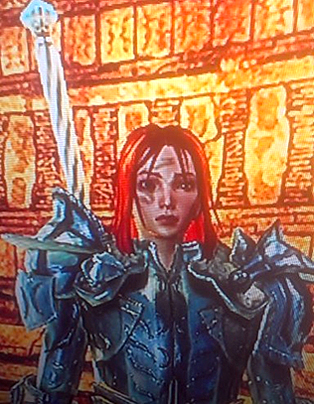 Virginia traveled the world wreathed in steel, she united ethnic enemies and led a guerrilla campaign against an army of personified evil; she spent months shitting in ditches and gathering her menstrual fluids with rags stuffed into her armour in between bear-wrestling ogres and kickboxing stone golems. But the first thing everyone wanted to talk to her about was her second X chromosome. It was subtle, and almost nobody meant any harm, but at least once per quest somebody would point out how incongruous Virginia’s sex was with her accomplishments. I, as Virginia, started feeling like the only people who really respected me were my enemies; they took me seriously because I was a serious threat to them. But the people whom my strength, leadership and wisdom actually benefitted all acted like I was somehow… cute.

I started looking into Virginia’s behavior – how often she intimidated others, how unwilling she was to pass command to anyone else – and wondering how different the game would have felt if I were playing as just another dark-haired beardy guy. I came to respect and admire Virginia as a character for what she was able to do while being believably flawed. There was more going on beneath what Virginia said because I was responsible for the cunning and logic that guided the dialogue choices. But I also felt some measure of appreciation for what it takes to accomplish something as a woman in a world that doesn’t want to take women seriously. I was annoyed because every single NPC of power (both men and women) would, inevitably, remark on my womanhood.

Returning to Dragon Age in later playthroughs as a man and even as a more feminine woman, there was a different feeling to the way NPC’s reacted to my character. When playing as a character that behaved more closely to gender expectations, it didn’t feel like the world was trying to put me in my place in the way that it was for Virginia. It left me with a persistent sense of not being approved of for something I couldn’t control and, really, didn’t have any bearing on the task at hand. Perhaps most frustrating was that these feelings and senses were so intangible; they could only be picked up consciously after a subtle pattern was established over a long time. Dragon Age has its political missteps, but it did require me to relate to a person that experiences an insidious form of oppression.

Active experiences are the point of playing games. Isn’t that what we keep saying whenever we feel like we have to prove ourselves to other art forms? Isn’t “interactivity” the champion we call to defend ourselves whenever some critic or academic tries to delegitimize the medium? There’s nothing wrong with heroes and swords and magic, but why are these experiences only being used as escapism and only for the segment of the population with the least need to escape? What about the people who can’t escape because they’re told in and out of games that they’re different or evil or that they shouldn’t exist? All art is, at its core, just communication, and the interactivity of games can be used to communicate a reality a person of privilege may not understand. That’s a good thing – it isn’t something to defend against or a sign of poor design. Games can structurally foster empathy: that’s something that should be celebrated, especially for those who want to (or need to) understand an unfamiliar living condition. 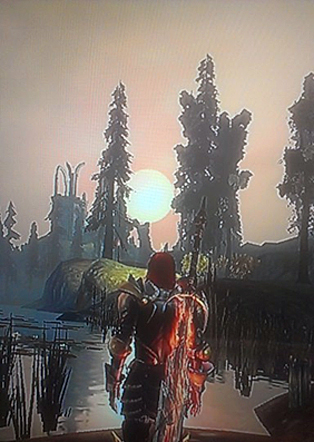 We act like the inclusion of minority characters is only for the benefit of minorities. Sure, everyone deserves a chance to see a bit of themselves in the hero and to see something immediately identifiable in a virtuous character, but this doesn’t have to come at a cost for the overrepresented majority. In fact, the majority will benefit as much from the chance to relate to someone unlike them in their fiction. It’s better to relate to someone than it is to dismiss them, and games can bring their players closer to a minority experience than any traditional art form. Playing as Virginia Cousland gave me some small sense of what it’s like to be hassled because others have difficulty matching my gender with my employment and my personality. It isn’t asking much to play someone that doesn’t look like you (if anything, it’s selfish to keep expecting it). At the very least, it’s a courtesy to everyone outside the majority who have been forced to relate to people with different life experiences for the past 40 years of games history.

It’s self-evident that videogame protagonists are overwhelmingly white and straight, but it’s just as much a truism that gaming audiences are not. We know that there are gamers who are non-white, queer, trans, female, elderly and disabled; and yet marginalized people continue to play in spite of being constantly under- or misrepresented. It’s still remarkable when there isn’t a beardy white guy on screen, but marginalized people are still able to relate to the best videogame characters because they’re universally compelling. There’s no great sacrifice in diversifying the medium because great characters will still be great characters. The only difference is that more people will benefit from having heroes of their own. Because as much as we like to pretend our minds are completely independent from the world they live in, we’re affected by our culture and our media.

Nobody – not even the most marginalized and jaded games critic – is suggesting that protagonists that are white, straight, men or any combination of the above should disappear. Most minority players grew up fascinated and compelled by the same characters as everyone else because the best characters tap into greater universal questions of the human condition. The idea of feminists being able to only relate to feminine characters, for instance, is funny when it isn’t insulting. All that’s asked is that some of these human experiences that games have communicated start including avatars that don’t have all the surface resemblance of every other avatar.

People treat the possibility of greater representation as if the white male protagonist will just disappear; the resultant fear is that the white male player soon follow. But not only is nobody asking for that, it’s an entirely unlikely outcome. People who love games will always love games; the idea of making the medium more welcoming and having more people to talk games with should be something exciting to work toward. As Carolyn Petit writes, “…the reality is that this is not a zero-sum game in which there must be winners and losers. The straight white male videogame hero is not going to go the way of the dodo; he’s just going to have more company, and then, everybody wins.” 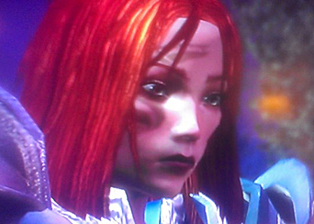 I’m not very optimistic when I wonder how many other people got what I did out of Dragon Age: Origins. Sure, there must have been a few other Virginias out there, but experiences like that are rare, and I only came by it accidentally. Which is a shame because I really felt I got something out of that game that no other game could offer – even while I was just slaying orcs in someone’s elaborate D&D campaign. Furthermore, I wonder how many women with no interest in games would have been drawn to Virginia’s campaign if I could tell them it was canon, or that it was specifically written with their life experiences in mind. Looking from the outside and seeing nothing to immediately relate to undoubtedly keeps a lot of prospective players out of the medium, and everyone deserves a hero that they can immediately relate to. Just as importantly, though, there’s value for everyone already engaged in the medium as well; there’s value in relating to people outside your echo chamber.

The so-called “core” won’t suddenly find themselves eradicated from the medium just because a few more people are invited to enjoy it. In fact, they stand to benefit as much as anyone. Games can be a bridge between people. It can be as direct as spreading awareness about depression or as tangential as playing a lady General in a world of swords and sorcery. It isn’t a sacrifice to open your mind to other experiences, it’s a universal benefit. The characters that matter will always matter, all that will change for those of us in the majority is that we’ll have more people to talk games with.

Mark Filipowich is a mute orphan from an idyllic village in the hills. After an evil empire burned down his hometown, he began a quest on Twitter @MarkFilipowich.

The World Next Door Is a Nice Enough Neighbor
Previous Post

Rookie of the Year: Please Tell Me How To Spend My Money