The following is an updated reprint from Unwinnable Weekly Issue Six. If you enjoy what you read, please consider purchasing the issue or subscribing for a month.

Following a game’s development is often more fun than actually playing the game itself. Little bits of information dribble out from a regular schedule of press events and conventions, and you begin to form them into the shape of your ideal game – the one that will consume weeks and weeks of your time and leave you writing breathless “GOTY 20XX” reviews on Steam. The game you get never measures up to the game in your head, but it’s a harmless bit of fun that at worst will result in a $60 disappointment and a slew of angry posts in a rarely-read feedback forum.

Dragon Age: Inquisition is in this stage of development right now, and from how it looks so far, it’s clear that BioWare, its developer,  is still smarting from the minor failure of Dragon Age II and the screaming shitstorm that was the ending of Mass Effect 3. They’re still the only game in town when it comes to western party-based RPGs, but they’ve been hemorrhaging goodwill ever since the first perplexingly ugly screenshots emerged of a “darker, sexier, better” Dragon Age II. They very badly need a win with Inquisition, or they risk losing ground to something like Obsidian’s upcoming Pillars of Eternity. So far they’ve avoided any obviously false promises or embarrassing “how do you do, fellow kids!” attempts at edginess. Almost inexplicably, Inquisition looks like it’s going to be a Good Game.

Part of that is that BioWare seems to have finally realized that the characters are the strongest part of their games. They may rely a bit too heavily on standard tropes — there’s the goofy guy, the wise mentor, the female magic-user who comes off as a bit of a sociopath, the big guy who likes killing — but they tend to give those tropes with enough heart that it ends up working. People are invested in their characters to a degree you’d normally only see with giggly half-geeks and pink-haired anime protagonists. The audiences at their conference panels are clad in surprisingly high-quality cosplay, the type that breaks through the normal stigma through time and effort that nearly rise to the level of religious tribute. Venture onto BioWare’s official forums (*Note: do not do this) and you’ll be confronted with thousand-page threads where the true believers — monkish curators of Feels — post frenzied declarations of love for even the most inconsequential of NPCs. If you’re BioWare, you want to monetize those people.

Inquisition’s cast has received the bulk of the roll-out’s attention, with cloaked apologies for Dragon Age II and explanations of how its sequel is going to be better coming in a close second. There’s returning stalwarts like Varric, the storytelling dwarf who was the best part of Dragon Age II; darkhorse fan favorites like Cullen, who has an inspired female following despite only brief appearances in the first two games; and intriguing new characters like the Iron Bull, a renegade qunari voiced by noted BioWare fan and shockingly good voice actor Freddie Prinze Jr.

None of them have drawn my attention than Vivienne, if for no other reason than her striking visual design, which makes her look like a humongously French version of Maleficent.

She’s presented as a master politician and player of Dragon Age’s version of the Game of Thrones, a person who would sooner burn an enemy with words than with a fireball, although as a mage she’s more than capable of the latter. She seems like the rare character that has a certain agency outside of the player — a refreshing challenge to the typical all-encompassing importance of the player character. 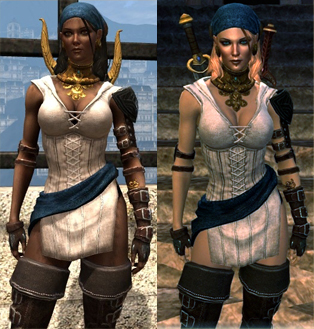 I like Vivienne. I’m also worried about her. But to explain why, I’ll have to tell you about Isabela.

BioWare are one of the more progressive developers around — perhaps the most progressive. They go out of their way to include as many points of view as possible in their games — you can, in Dragon Age and Mass Effect, choose your character’s physical appearance, gender, sexual orientation, religious views, political opinions, and a host of other small things that mean a lot to people. It makes Ubisoft’s weird claim that adding female assassins to Assassin’s Creed: Unity would be too much work seem odder and more regressive than it already is.

Part of their inclusiveness involves the option for the player to character to engage in a romance plotline with an NPC. This has been a feature of nearly every BioWare game since Baldur’s Gate II, and though it can be quite badly implemented — at worst, a “give NPC a gift, say nice things to NPC, have PG-13 fade-to-black sex with NPC” parody of how real relationships work — it’s become something of a selling point. You can actually see the company get braver with each successive release. Baldur’s Gate II had four romanceable characters, all straight, while Mass Effect 3 had almost a dozen, with several bisexual or gay characters among them. This is obviously a good thing — it seems simple, but video game characters tend towards the straight white male mold so often that any chance to introduce diversity should be welcomed.

Isabela was one such romanceable NPC in Dragon Age II. Like so much else about that game, she had some significant flaws. Her motivations aren’t terribly well-explained, she boomerangs from irresponsible to super-serious too quickly to be believable, and her costume, well… it’s not so much “armor” as it is “underwear”. Perhaps coincidentally, there are no snow levels in Dragon Age II.

Despite all that, Isabela does represent a rarity – a dark-skinned, bisexual female character in a video game. She’s practically a unicorn.

Dragon Age II was moddable to a small degree – mostly in terms of things like textures and graphical effects. Games like this tend to have fan modders that make small tweaks to a character’s appearance. Maybe they feel the character’s ears or too big, or maybe they feel the character would look better in red. Innocuous, for the most part. Sometimes a mod will make the character better fit the modder’s idea of attractiveness. A bit squicky, yes, as the idea nudges up a bit too closely to the rubbery concept of a customizable sex doll, but generally nothing more than slightly distasteful.

You never do know what you’ll find attractive. Dating and sex do involve something at least resembling discrimination. Maybe you aren’t into skinny people, or Democrats, or firefighters. All that is fine. It’d be impossible otherwise. It’s tempting to write Isabela’s whitewashing off as just a preference.

To do so would be to divorce that sentiment – that white and blonde are more attractive than dark-skinned and dark-haired — from a greater societal context that seeks to arrange races in order of desirability, with light-skinned at the top and dark-skinned at the bottom. It’s telling that the original modder titled his project “More Attractive Isabela”, as though by making her white he was somehow improving her. It’s reminiscent of an infamous experiment where black children presented with two dolls (one white, one black) tended to prefer the white doll, sensing that it was regarded as better or prettier.

Ignoring it would also ignore the change’s popularity. Right now, a spiritual successor charmingly referred to as “Sexy Fair-Skinned Isabela” is the third-most popular file on Nexus Mods, having been downloaded almost a hundred thousand times. This is a tellingly high percentage of people that bought the game on PC. It once again reveals nerds as just as capable of shocking and unreflecting racism as anyone else. One might think that a social group already used to exclusion and bullying might recognize the idea of whitewashing a dark-skinned character for what it is — loathsome and awful – but that appears to be far too expansive of a hope for those hundred thousand people who were so put out by Isabela’s skin that they went out of their way to change it.

This is already happening with poor Vivienne. She hasn’t even yet been announced as a love interest (and she may very well not be one), but already there are renditions out there rendering her as white and tellingly fixing her “damn lips.” The Frostbite 3 engine that Inquisition runs on is notoriously hard to mod, but one anonymous modder already released a planned edit to Vivienne that whitewashes her entirely: 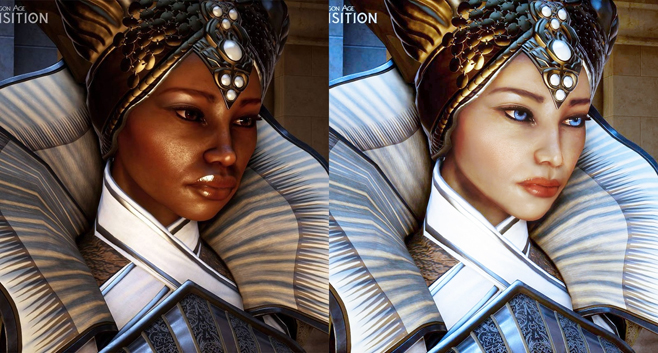 Some fans have taken to demanding an explanation for how a black woman could rise to such a high position of power in Orlais (Dragon Age’s equivalent of France) or how she even exists in such a society in the first place – as though people of color were somehow nonexistent in medieval times. It’s not even just Vivienne – any character with the slightest amount of pigment is in danger of this treatment. This is a setting in which dragons and magic exist and yet some folks find Vivienne and other dark-skinned characters to be the least believable part of it.

It’s damn near impossible to stop this but we might as well call it what it is: Fuckery. Smug, embarrassing fuckery of the lowest order, fuckery with an ugly and fathomless history, practiced by fuckers who could extinguish it with the slightest of effort but would rather their virtual girlfriends not be exempt.

Vivienne the character sounds like she’ll be just fine. I can’t say the same for those with whom she’ll be adventuring.