Slime Rancher 2 is a game about selling poop.

The cheerful work simulator is constantly grappling with its own identity. The main task of the game is rounding up slime and corralling them into pens so that they can turn a profit. But it’s self-aware of that and covered in a cute skin. The slimes are always smiling, bouncing around and making little noises. There’s no way players would want to treat them like meat or dairy animals, with all the gritty realities those industries entail.

So instead, slimes produce plorts when fed, and it’s these you can sell for money, which you can use to more efficiently gain more plorts. But make no mistake. Plorts are poop.

This gameplay loop, which as far as I know is transferred directly from the original Slime Rancher, works exceedingly well as a compromise between the forces that otherwise threaten to make the game fall apart. It is a game about enjoying taking part in ruthlessly exploitative capitalism. It is also a game about hanging out with cute little guys. The humor of plorts blurs where these things join together, and the cleanliness of their jewel-like appearance stands in for where everything else has also been cleaned up.

When discussing the tension hidden within Slime Rancher 2, Chris Donlan highlighted the exploration as one of the uncomplicated joys of the game. And it is a beautiful world to exist in, with islands in different bright colors, huge waterfalls and giant trees, and at night the moon and stars glittering over everything. “It is such a pleasure to explore,” writes Donlan. “I would be out there wandering even if I wasn’t lured through it with the promise of slimes to capture.” 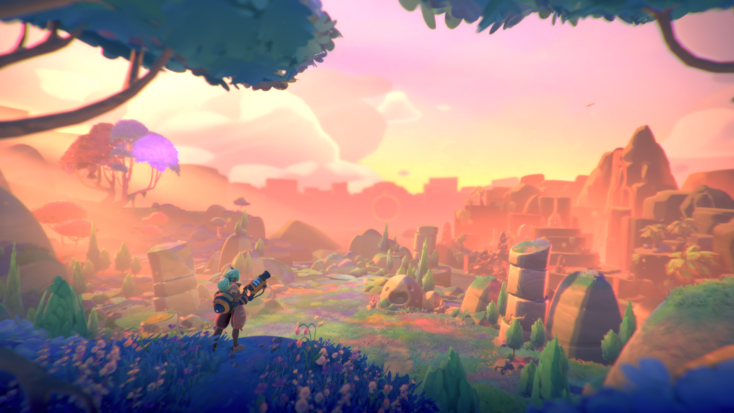 In her recent book Wandering Games, Melissa Kagen argues that “wandering is an activity designed to provoke unproductive, contemplative, anticapitalist play – or at least it can offer a provocative space for challenging (if not completely avoiding) the success paradigms and systems that have evolved around gameplay.”

But I never actually found myself wandering much in Slime Rancher 2. Like Donlan, I was really lured by finding slimes and various other resources that I needed. Like in many games, some of the main upgrades I was grinding for were more stamina for sprinting and fast travel unlocks, so that I could get to places faster and more efficiently. Wandering was an annoyance, something to be reduced over time, not a draw.

In Braiding Sweetgrass, Potawatomi scientist and writer Robin Wall Kimmerer recounts an experiment undertaken by one of her graduate students, Laurie. Sweetgrass is an herb considered sacred by many indigenous peoples, and the student wanted to discover how it responded to traditional harvesting methods. What she found was that sweetgrass flourished most when it was harvested at all. Its relationship with humanity is a win-win.

Of course, there are limits to this, and sweetgrass can still be over-harvested. Many indigenous practices avoid taking the first plant, more than half, or more than what you need. In this way, wandering becomes a part of what makes these relationships mutually beneficial. The harvester has to explore past their first foraging opportunity, and further still to assess how abundant any given resource is. Only by doing so are their practices sustainable, let alone beneficial. 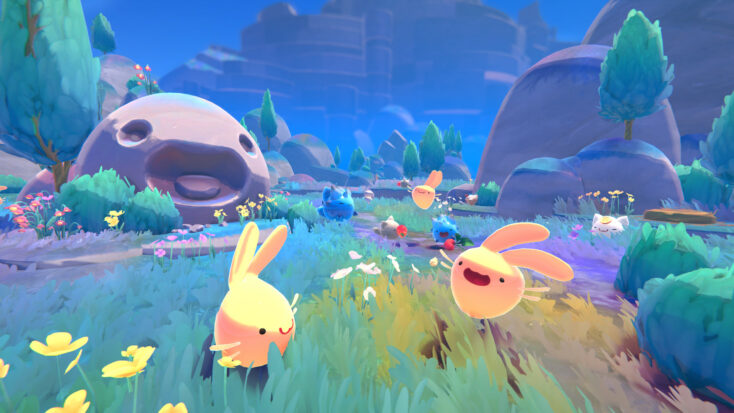 Not so in Slime Rancher 2. Even clearing out an entire area won’t prevent it from refilling with apparently unbothered slime next time you appear. And your appearance often will cause an area to be decimated, even if accidentally. Slimes can take on the characteristics of other types of slimes by eating their plorts, leading to crossovers which are equally delightful and profitable.

But if these already crossed slimes eat another different kind of plort, they become tarr, which consume and transform slimes into yet more tarr. An entire area can be destroyed within minutes. But it only seems to happen when the player appears. Presumably this is because slimes are not loaded offscreen and therefore aren’t eating. But it means that taking your time wandering an area with three or more kinds of slime is basically a death sentence for them all.

Wandering is deeply disincentivised in Slime Rancher 2, and yet, return after causing a tarr catastrophe and everything will have bounced back as if nothing had happened. Slime thrive when they’re harvested, when they’re not, when you spend time admiring the landscape and most of all when you speed through it as fast as you can. At its core, playing with an eye to sustainability is virtually impossible just because of how resilient the ecosystem is.

And why would you need to? It’s only a game about selling poop.

Jay Castello is a freelance writer covering games and internet culture. If they’re not down a research rabbit hole you’ll probably find them taking bad photographs in the woods.

Everyone Has a Job: The Future of Silent Running (1972)

Lonely Heart of the Cards Club