This is a reprint of the letter from the editor in Unwinnable Weekly Issue Twenty-One. You can buy Issue Twenty-One individually now, or purchase a one-month subscription to make sure you never miss and issue! 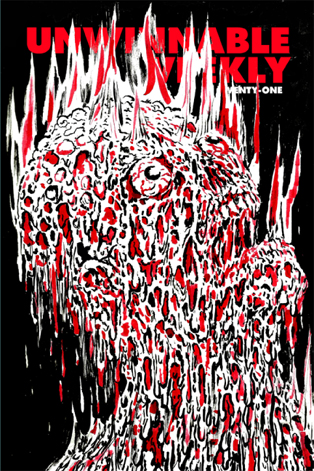 Welcome to our special Halloween issue! We’ve got an issue packed with amazing stories, so I won’t rattle on too long here. I’ve got to get to work on my costume.

Ethan Sacks laments the state of the modern big budget horror film (spoiler alert: director Guillermo Del Toro appears in a cameo). Jill Scharr brings her parents to a haunted house…based on 1980s-era New York City. Ed Coleman doesn’t like horror movies and reveals the 1988’s The Lady in White is the reason why. I do some revealing, too, namely why I dislike Halloween costumes, Finally, Gus Mastrapa talks to Nate Hayden, designer of the awesomely gruesome board game Psycho Raiders. Nate’s collaborator, artist Mat Brinkman is responsible for our grisly cover art. A special thanks to the both of them for letting us reprint it!

Speaking of art, I’ve thrown in a monstrous photograph and Chris Martinez and Amber Harris collaborated on a cheeky bit of Halloween art. I’ve shrunk it down for the magazine, but you can download it as hi-res wallpaper here.

As if that wasn’t enough, I’d like to remind you that our resident DJ Kursse has put together another terrifying Halloween mix tape. You can find it on the Unwinnable website, along with links to his previous mixes, here.

One more music related note: I am collecting songs about werewolves in a collaborative Spotify playlist. Feel free to add your favorite tune!

And a final bit of housekeeping – Unwinnable Weekly is now available as mobi and epub files. Links to all three will be included in the subscriber mailings from now on. If you’re a subscriber and would like to get copies of earlier issues in those formats, just get in touch.

For that, or any other questions, comments or spooky wishes, email me any time at stuhorvath@unwinnable.com.

Have a happy and safe Halloween!

There are sinister forces at work that befouled horror movies for me in recent years – namely a monstrous collection of interchangeable stories that are destined to haunt the bargain bins at FYE for years to come.

“Oh, the Horror!” by Ethan Sacks

“Oh, the subway!” gasps my mother, from right behind me. I squeeze her hand. I’ve gotten on hundreds of subway cars in the just over four years I’ve been working in New York City, but this car isn’t like the others. Every inch of the plastic seats and walls is covered in large, cartoonish graffiti. Piles of rags sit in the corners. Only one man sits inside, a trembling white man with large glasses and a trenchcoat. He looks at my mother and me as we enter, and now I can see he has a gun clutched in his hands.

“Don’t Go On the Subway,” by Jill Scharr

To properly explain [The Lady in White], I need to give a quick synopsis. I would warn you about spoilers, but as an attorney I can assure you that the statute of limitations for intentional spoiling of a film from 1988 expired long ago. Unless you live in Florida or Louisiana. The laws in those states are all fucked up. But seriously, any spoiling will not ruin the movie.

Being around people in costumes makes me profoundly uncomfortable. No one, no matter how much they love costumes, looks at ease in them. It is like seeing someone wearing a beret for the first time – you can perceive something from their body language that screams “I don’t wear this all the time.” Which, I mean, is a given for Zombie Abe Lincoln standing by the punch bowl at the Halloween party. At least I hope it is.

Unwinnable: What do you consider to be the Citizen Kane of horror films?
Nate Hayden: Suspira? It is gloriously shot. And the tone and orchestration of the death scenes is just remarkable. There could be many other match ups like that. The Wizard of Oz of horror equals Hellraiser. Gone With the Wind of horror equals Texas Chainsaw Massacre. The Kramer vs. Kramer of horror equals The Exorcist.

Unmixable: Ghastly Stories From Beyond the Grave