It’s easy, as a writer, to fall into bad habits. We often glamorize putting in long hours and late nights to reach deadlines, convincing ourselves that our negative routines are necessary parts of the creative process, burning the midnight oil in service to our readers. The cycle of turning suffering into inspiration, then suffering to turn inspiration into creative output, is one that all creatives are likely to be well acquainted with.

In reality, there’s nothing glamorous about failing to establish healthy boundaries between your work and your life, even if you’re working for your passion more than your paycheck. It doesn’t result in better work, greater success, or more creative satisfaction. Instead, it only leads us to trade our health and relationships in the pursuit of executional excellence, only to ironically compound our misery in exchange for diminishing returns, chasing after goals that leave us feeling empty in the end.

This is the struggle that players must navigate in Bad Writer. It’s a deceptively insightful game from award-winning writer and designer Paul Jessup, one that author and critic Lavie Tidhar calls, “the most depressingly realistic writer’s life simulation I ever experienced.” While its adorable pixel art aesthetic doesn’t exactly telegraph despair, and its simple mechanics don’t immediately imply much challenge, my few short playthroughs with the game felt like taking a long, hard look in the mirror, and learning that to improve my craft as a writer, I need to improve how I live as a person.

Bad Writer starts with an introduction to its protagonist Emily, who lives in a modest home with her partner Cleo and their cat. Instead of searching for another employer right away, Emily decides to try becoming a professional author, giving herself a month to earn a sustainable living before she looks for another job. With little more than a computer, ambition and a supportive partner on her side, she begins adapting to the work-from-home life, with no bosses, no structure and no guarantees for success.

From there, it’s up to the player to determine the course of Emily’s future by making daily decisions that either diminish or replenish her happiness (which, in true videogame fashion, is visualized by a meter). Some actions inspire ideas for stories that she can submit to one of a handful of literary journals while others can simply have a positive or negative impact on her mental health. The goal is to land enough submissions to earn a sustainable living without burning out and throwing in the towel due to despair. 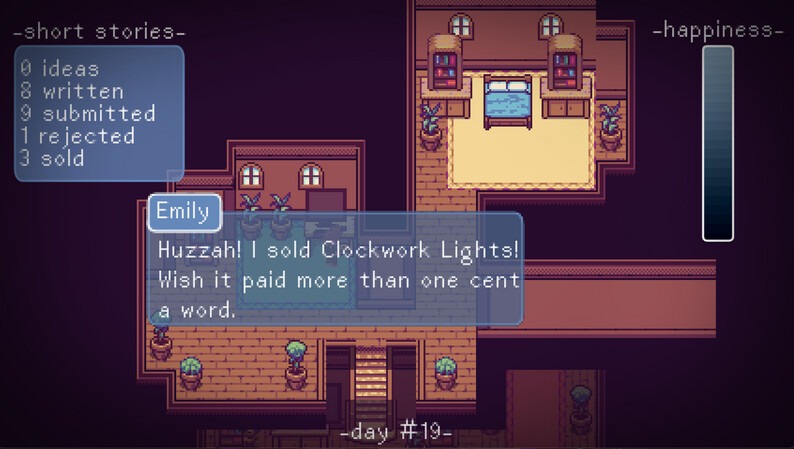 Some of your available choices, like reading a book or watching television with Cleo, might seem like distractions but can actually give Emily much needed inspiration. Other decisions, like checking social media, have a devastating effect on her happiness. There’s also an element of randomness that can impact which decisions are available on a given day; for example, a blizzard might prevent her from leaving the house.

On a mechanical level, Bad Writer sounds like a simple exercise in managing energy and productivity, optimizing inputs to maximize outputs. It’s also short and a successful run might not take more than 15 or 20 minutes to complete. However, that’s more than enough time to impart some valuable lessons on the nature of writerly lifestyles, while making it easy to try again if your first few runs don’t go the way you think they will.

My initial inclination was to try to rack up as many ideas as possible, avoiding anything that would take my attention away from the task at hand. When you work from home, your surroundings are full of potential distractions, and so staying as focused as possible seemed like it would be a winning formula. Hustle and grind. No time to rest.

It turns out this is the fastest path to failure in Bad Writer. Emily soon descended into depression with no published pieces to show for her effort. On my second run, I tried some of the other activities that are presented to her. Taking a walk through the park with Cleo? Super inspirational and yielded several ideas, plus the happiness meter received a solid boost. Reading books gave her ideas for her own work too, which makes sense since consumption can fuel inspiration. A couple more tries later, I finally made it through a full month, achieving something resembling a balanced freelance life.

In less than an hour, Bad Writer had shown me some simple truths about the creative process that I understand, but frequently ignore when I’m under stress. When I have too much to do – whether that’s in reference to writing work or anything else – I tend to put my head down, block out everything else, and do whatever’s necessary to get as much stuff done through sheer force of will. Sometimes this works in the short term, but eventually, I inevitably hit a point of diminishing returns. I suffer for the work and the work suffers for my shortsighted overambition to take on too much, too quickly.

Bad Writer’s title feels like a commentary on the imposter syndrome that many of us feel when we pursue this craft. If you’re going to create a game that halfway accurately captures how it feels to be a writer, you must eliminate the player’s confidence in their abilities; even the most skilled wordsmiths are often plagued by self-doubt. In those moments where we’ve perhaps taken on too much, have procrastinated for too long before sitting down to get the words on the page, or start to question our abilities as artists and craftspeople, it can be easy to believe we just need to work harder.

Sometimes that’s true. More often, we would be better served by spending time with our family and friends, reading a book, or doing something, anything that might replenish our energy rather than trying to go full speed on an empty tank. Bad Writer isn’t complex, but it doesn’t need to be to show that there is no way to be an interesting writer without living an interesting life, and there’s nothing interesting about overworking oneself to the detriment of all the things that make our lives worthwhile.

The Prince of Hades Laughs with a Mouthful of Blood