I started playing Project Makeover for the same shameful reason I start playing most mobile games: because the Instagram ads won. Perhaps you too have seen these ads. Some show women giving themselves tragic, accidental haircuts while others show women inexplicably wearing what can only be described as a gloopy, Scooby-Doo monster-esque mud suit. Characters, usually women, surrounded by noxious clouds of body odor are put in humiliating situation after humiliating situation. The ads want to know: can you, the player, give them the makeover they so desperately need and save them from a lifetime of social disgrace?

Perhaps even more to my shame, I downloaded Project Makeover because I saw an ad that showed a guy doing some improbable bench pressing with a woman and a barbell while another woman – presumably his girlfriend – watched tearfully from across the room. I am but a humble gym rat at heart, so I started playing with an admittedly petty attitude while wondering where the bench pressing and bad haircuts might come into play.

I quickly learned the makeovers are just the framing for Project Makeover. At the beginning of the game the player creates an avatar, who takes over as the Director of the in-game reality makeover show Project Makeover. Along with a quirky team of stylists, the player spends coins to update a character’s hair, makeup, facial hair, wardrobe and home. Most of the gameplay, though, involves completing match three levels, which is how the player earns coins to spend on makeovers. Project Makeover is hardly reinventing the match-three wheel – the belts, lotions, combs and special pieces emulate Candy Crush Saga‘s liquorice locks, chocolate, liquorice swirls and special candies – but the makeovers offer an engaging secondary mode of gameplay. 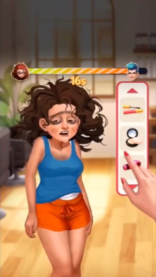 Despite my initial trepidation, I was pleasantly surprised at the quality of the game. The ads belie the surprisingly tender ethos at the heart of Project Makeover. In the game’s narrative, the player’s character is taking over for Project Makeover‘s tyrannic former director, who mocks and disparages clients and employees alike. Every time, she is thwarted cartoon villain-style, proving little match for the unrelenting positivity of the Director and their crew. Each episode involves a transformation not just of appearance, but spirit, as well. Fourteen makeovers and almost a thousand levels into Project Makeover‘s nearly four thousand levels, I have yet to see a barbell or a mud suit. Rather, I’ve seen down-on-their-luck characters who lack confidence or have lost sight of their true self. And I’ve helped them find that self again through the power of self-care, minor home renovation, and, of course, match three levels.

The difference between the ad messaging and the story messaging is somewhat jarring, but surely the tawdry humiliation and outrageous drama of the ads sells where emphasizing kindness and care toward oneself would not.

Yet, the escapism Project Makeover offers is flawed. Each makeover gives players direction over the subject’s appearance, wardrobe and home environment in phases. Early stages of the makeover can include actions like treating sunburn or acne, tweezing eyebrows and trimming facial hair or even encouraging the person to pursue physical activity. Later stages of the makeover involves choosing a new hairstyle, wardrobe and accessories, and sometimes makeup for the blank slate which we so painstakingly create in the earlier phases. Naturally, participants are uniformly grateful to be rejuvenated and given the confidence to pursue their dreams.

After a few makeovers, though, the boundaries of Project Makeover‘s imagination became apparent. The makeover subjects are primped, polished and molded into a conventionally attractive, slim and able-bodied ideal the beauty industry has been pushing for decades. And while I’m all for developers reusing assets, I have noticed that seeing certain elements repeated in different makeovers lends the end result, to put it generously, a cohesive style to the player character’s portfolio, and less generously, a sameness to the makeovers and their subjects.

And, of course, Project Makeover runs on the same freemium economy of many mobile games. With each level, the player also earns a secondary currency that is used to purchase furniture, clothes, accessories and other in-game cosmetic items for the Director’s home. Gems, a third, premium currency, allows the player to buy extra lives, extra turns and useful power-ups. Gems can be earned incrementally by logging on every day, completing events and progressing through makeovers. Naturally, they can also be purchased with fiat currency, giving players a more frictionless way to acquire gems that might otherwise take them a week or more to earn. 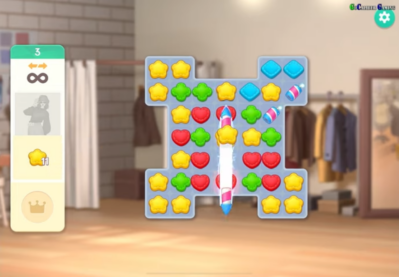 In this sense, playing Project Makeover sometimes feels quite predatory. Though the game is fairly generous in handing out periods of infinite lives, the levels are designed to keep me playing. While I don’t want to use the word lightly, Project Makeover is addicting enough that I have played dozens of levels in a day just to meet a timed event deadline; I shudder to imagine the number of hours I have poured into the game overall. Project Makeover makes it just easy enough to spend hours crushing levels that I have thought, more than once, about giving developer Magic Tavern money to maintain my flow and further my progress. It doesn’t help when Project Makeover is also capitalizing on the fear of missing out with timed makeovers, limited events and seasonal items. Even though the tone of the writing punches way above my original low expectations, the alarmist nature of the ads feels in line with the inherent urgency of Project Makeover‘s freemium economy.

That sense of urgency fuels the addictive elements of Project Makeover. There is never any friction in the makeovers themselves. When it comes to choosing hairstyles, clothing, furniture and decor, the player is always given three options. While certain pieces of clothing or furniture are clearly designed as part of a set, each element is also designed to work with the other options. In Project Makeover there are no wrong options, no bad choices – only the illusion of you, the player, creating a unique style from the available options. Obviously more options would make the game unmanageable from both labor and file size perspectives, which I don’t want to argue for; rather, I think it’s worth examining the idea that these beautiful, perfect outcomes exist to drive players back into the levels.

Most of the friction in the game comes from having to repeat a particular level over and over to the point where you’re all but forced to use special pieces and powerups. Levels become a compulsory grind to earn enough coins to complete a makeover and completing a makeover rewards you with more levels and more gems to spend on powerups to complete those levels. The inherently repetitive elements – of both makeovers and levels – create a compulsory and predictable cycle.

What I ultimately found is that Project Makeover is entirely designed to capitalize on a player’s impulses. Whether that’s intentional or not, I find it amusing in kind of a cynical way that Project Makeover has recreated, in almost its entirety, the experience of the commercialized self-care that corporations have co-opted from the most basic definition of “the process of taking care of oneself with behaviors that promote health and active management of illness when it occurs.” In real life and in Project Makeover‘s bland Befores, there is always a solution to the problem – an After – just waiting to be sold.

Madison Butler is a writer and self-proclaimed jock. She is an editor at Sidequest (sidequest.zone), co-founded the blog Critsumption and once got really into powerlifting via Fitness Boxing for the Nintendo Switch.