Welcome back to another installment of Versus Mode, in which we pit two board games with similar loglines against one-another to see which one comes out victorious! At a glance, Myth and Bardsung don’t have a whole lot in common beyond their genre. Sure, both are dungeon-crawl games at the high end of the complexity scale, but that’s where the surface similarities end.

Myth is an out-of-print entry from MegaCon Games, originally published in 2014 (when it was funded via Kickstarter, something else that it and Bardsung have in common) while Bardsung was just released in 2022 by Steamforged Games, following it’s own successful 2020 Kickstarter campaign.

Both make use of extensive hordes of plastic miniatures, but Myth embraces a more rounded, almost cartoony aesthetic, adapted from the art of Keith Lowe, while Bardsung is clearly trying to fit more into the D&D mold, with art that matches Steamforged’s Epic Encounters line and critters and classes obviously derived from D&D classics.

Where Myth and Bardsung earn their Versus Mode status is implied in the names of the two games. Both present their epic adventures through a slight remove, couching the terms of the game’s narratives in the grand stories that are told about the days of high adventure. In Myth, the cover illustration even boasts an inset picture of characters around a campfire, framed by the action scene that makes up most of the cover, suggesting that the heroes are recounting their exploits during their downtime.

Naturally, the two games have other similarities, and other differences that are just as salient. Both use gridded floor tiles, as is usually the case in tabletop dungeon crawlers, though the size and general deployment of these tiles varies considerably from one game to the next. And both utilize pre-generated stories, broken into chapters or acts, that tell you what you’re fighting and how to place the tiles. Both games also introduce different ways in which character choice influences the unfolding of the story. 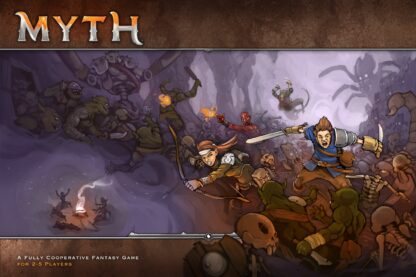 Other things they share are, generally, common among games of this type. The characters are D&D-style classes, with abilities that are represented by cards that can be gained throughout the game as a form of “leveling up.” Players have dashboards for their characters where these cards and various tokens can be displayed and put into play.

Both games are fully co-op, with players combining their forces to go up against the board and the various monsters that it spawns. In Bardsung this takes the form of traditional fantasy antagonists like hobgoblins, dark dwarves, and so on, while Myth introduces an embodied evil inventively called the Darkness. And both games are concerned with truly epic storylines – in fact, maybe a little too epic. The back half of Myth’s 60-page rulebook is concerned with microscopic-text breakdowns of its various adventures, while the “Adventure Book” for Bardsung is fully half an inch thick, containing nearly 200 pages of maps, encounters, and narrative blocks.

Whether that’s an upside or a drawback will depend a bit on your predilections. As I’ve made clear before, I tend to find such scope a little intimidating, but with price tags over $100, it can also certainly feel like you’re getting more bang for your buck. As of this writing, I’ve barely scratched the surface of either game in actual play – which is what happens when you have a game this dense and you play it, like, twice – but they both offer some dramatic benefits for those who like this kind of thing.

The artwork in Myth is highly appealing, especially on the dungeon tiles, which are of the type that make you immediately want to explore and adventure when you just look at them – too many dungeon crawl games neglect the power that a good dungeon tile can have to fire the imagination. Bardsung’s style is more familiar, thanks to the popularity of the Epic Encounters miniature lines, which has the added advantage of allowing you to use your Bardsung minis in your games of D&D without having to use much imagination – a “ferrous maw” looks an awful lot like a rust monster, for example. 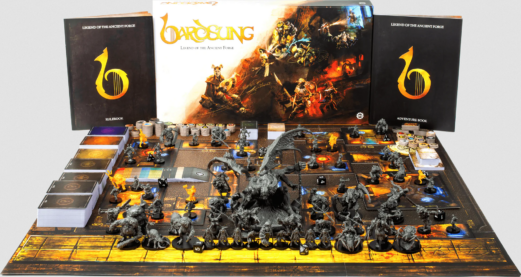 Something else that both games have in common is somewhat more surprising – both are remarkably well-suited for storage. Often, in games of this type, once you’ve taken everything out of the box, punched it and played with it, it’s all-but impossible to get it back in. This is a matter I’ve discussed many times before in this column.

In the case of Myth, the oversized box has plenty of space inside, which is subdivided by cardboard inserts that keep the miniatures separate from the tiles, cards, dice, and books. There’s probably even enough room for the various Kickstarter stretch goals, though my copy of the game doesn’t have them, so I can’t say for sure.

The even more oversized box that Bardsung comes in is stuffed to the gills, with no extra room for a feather, let alone the Kickstarter exclusives (which come in their own box), but everything in it comes packed in sealed plastic shells that can store minis, dice, tokens, and so on, keeping them separated and safe enough. It’s not always ideal for getting everything out of the box, but with such a jam-packed game, it’s a welcome fob toward organizational sanity.

So, which game wins? As is often the case, there’s no clear victor here, and it just depends on what you’re looking for. Myth brings a number of interesting mechanics to bear, and is very much its own thing. Bardsung works nicely as a GM-less roleplaying game and carries a lot of D&D flavor, plus some welcome economy with its many miniatures. Also, Bardsung has the advantage of still being in print (for now, at least) while Myth has to be acquired on the secondary market.