Started in 2013, Gamelyn Games has developed something of a cottage industry releasing various games in the “Tiny Epic” line. As the name suggests, these are minuscule board games that come in boxes about the size of the ones you used to get checkbooks in, back when anybody had checkbooks. In a world filled with massive board games jammed to the brim with tokens and miniatures and boards and bits and bobs, it’s certainly a novel approach.

As of this writing, there are innumerable Tiny Epic games, including Tiny Epic Kingdoms, Tiny Epic Zombies, Pirates, Dinosaurs, Galaxies, Mechs, Tactics, you name it, really. I’ve never played any of them, though, until they launched the Kickstarter for their latest addition, Tiny Epic Dungeons. (Latest at the time, anyway. As I write this, the Kickstarter for Tiny Epic Vikings is in full swing.) 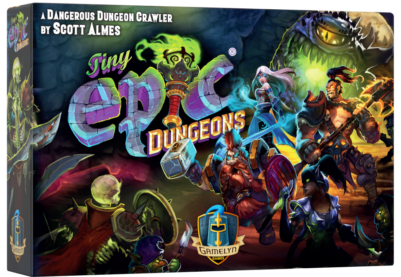 As you might be able to guess from the name, Tiny Epic Dungeons is an attempt at translating the dungeon crawl board game to the Tiny Epic model. As such, it’s one of many games – dating back to the very origins of the form, really, with 1975’s Dungeon! – that attempt to streamline the often-cumbersome dungeon crawl into something more manageable. In this case, something that will fit into one of those tiny little boxes I mentioned.

Usually, when this is done, the first thing to go are the miniatures. Surprisingly, in the case of Tiny Epic Dungeons, those actually stick around – at least, the hero ones do. And the enemies are represented by wooden meeples. There’s a decent number of heroes, too. Eight in the main box, with a Kickstarter expansion, Stories, that adds eight more.

In addition to a truly tiny miniature, each hero is represented by a hero mat that tells you their actions and stats, in pretty standard fashion. The artwork seems to have distinctly borrowed its aesthetic from World of Warcraft – there’s even a playable panda person in the expansion – and is suitably bright and fun, as a result.

Honestly, the whole thing looks extremely appealing, which is probably a big help when you’re trying to get a Kickstarter to fund. It’s a small thing, but the inside of the box lid has an illustration of a lone adventurer standing at the mouth of a dark dungeon, and it goes a long way toward capturing the vibe the game is trying to hit.

Perhaps more surprisingly, everything more-or-less fits back into even that tiny box, once it’s all been taken out. You can even put the stuff from the expansions in there, if you take out the sixteen hero miniatures you’ll have accumulated by then.

For such a small game, though, Tiny Epic Dungeons has surprisingly dense rules. The booklet may only span about 20 pages, but the print is minuscule and everything is really packed in there. The basics of gameplay go like this: The dungeon is formed by turning over one of a stack of identically-sized square cards, representing traps, treasures, and chambers within the dungeon. Your adventurer explores by revealing new rooms and dealing with the contents, spreading out from a central card that starts the dungeon. (The Kickstarter had an option for a neoprene mat to make laying the tiles out a little easier.)

Once you explore enough to find the Lair Door, you have to then contend with the dungeon’s boss. Pass through the Lair Door, and play moves from the dungeon tiles to a “Boss Mat,” representing the boss itself, and also dictating how you go about defeating it, and how it goes about trying to defeat you. As with the adventurers, the bosses are something of a who’s who of fantasy mainstays, including a dragon, a lich, a goblin king, and a beholder with the serial numbers filed off (called a “Seer” here), to name just a few. There are six boss options in the core box, with two more added in the Stories expansion. 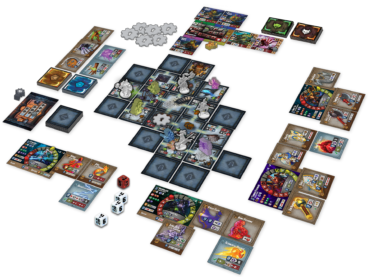 The only way to win the game is for everyone to make it through and triumph over the boss at the end, but there are lots of ways to lose. Interestingly enough, however, none of them are to die. In fact, your heroes can’t die. If your brave adventurer is ever reduced to zero health, they are simply unconscious until their next turn, at which time they take a “rest” action, regaining 3 health.

Instead, lose conditions include things like having too many monsters in the dungeon at a time, being unable to continue to place dungeon tiles, or having the torch burn out. This latter is a mechanic that adds a sort of ticking clock to the gameplay, as you try to find your way to the lair of the boss. There is a torch icon that moves along a track at the end of each player’s turn, triggering specific effects as it hits certain portions of the track. If it reaches the end and you haven’t yet found the boss – you’re lost in the dark and it’s “game over.”

Two Hands Off the Wheel: Learning to Embrace the Chaos of Zweihander
Previous Post

What to Do for Dinner