A theme that has come up time and again in this column is that art plays a big role in determining which games actually make their way into my house. Of course, we all know that you’re not supposed to judge a book by its cover but, for real, without having read it, how the fuck else are you going to judge a book?

More to the point, art plays a major role in games. Not just in how they look, but how they play. Not only will you be spending an awful lot of time staring at the art of any game that you play often (or for long), but it’s also the art that, in many cases, conveys vital information about how the game is played. Take, for instance, the nicely lit streets of Horrified, or the light and shadow effects of Massive Darkness.

Art certainly played a major role in my backing the Kickstarter for Hidden Leaders, a game created and released by the Austrian company BFF Games. The art in question is by Satoshi Matsuura, and I say that it played a major role because, had it not been for him, I probably would never have heard of the game at all. I already followed Matsuura on Twitter and Instagram, and it was through his updates that I knew there even was such a Kickstarter happening.

Anyone familiar with Matsuura’s art knows that he’s got a distinctive style all his own, and not only does he seem to have not been asked to compromise that style for Hidden Leaders, that style informs the game and gives the whole proceeding its character. This mostly takes the form of the game’s numerous hero cards, which boast names like “Depressed Druid,” “Curious Troll,” and “Miniature Merman.” As you can imagine, they are a delight to behold!

Honestly, though the Kickstarter included extensive access to information on how to play the game in advance, I mostly ignored it until the small box arrived on my doorstep. I wasn’t really buying it for the game itself, after all, and I was sure I’d enjoy learning to play once it arrived. And I mostly did. Hidden Leaders is, fundamentally, a very odd sort of bluffing game, similar, in some ways, to something like Campy Creatures, but in other ways very different. 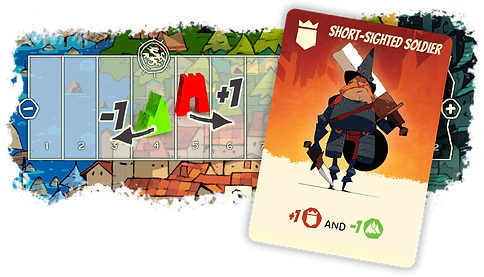 The idea seems simple enough on paper. There are four factions, each of which is vying to take power. Two of these are represented by wooden meeples, which move along a simple track. Most of the hero cards that you can play move one or both of these meeples either forward or backward along the track. If one or the other is far enough in the lead when the game is over, that faction is likely to win. If they’re closer together, a third faction wins. And if both of them are far enough along the track, the fourth faction takes the cake.

Again, it sounds simple, but it can get real weird. Hidden Leaders is one of those games that is deceptively basic but can grow strangely complex as you play. It’s also a game that can, theoretically, be played with only two people – which, as of this writing, is the only way I have played it – but it’s pretty obvious, just by looking at the rules, that it’s a very different game when you have 3 or more players. 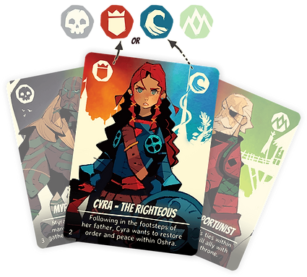 For one thing, ties are extremely unlikely with only two, yet many of the game’s core mechanics are built on helping you to win in the event of a tie. If you had four, five, or even six players around the table, ties would go from likely to inevitable. (With only four factions and six leaders, you would always have a tie when playing with six players.) Meaning that the mechanisms of playing, discarding, and so on not only becomes more important, they literally becomes the deciding factor of who wins and who loses, every single time.

Playing the game with only two players takes a little getting used to, but is mostly a matter of trying to ensure that one of your leader’s two factions takes the prize. That’s always important – you can’t win without it, no matter how many players are at the table – but with only two, it’s about the only thing that’s likely to matter, as your odds of ties are slim. Also, with only two players, there’s a lot less happening to jostle the meeples along the track, and therefore less randomness to contend with.

Further complicating matters, both the regular and Kickstarter versions of the game come with additional, more complex hero cards that add new wrinkles to gameplay. I haven’t tried those yet, but they would come into play a lot more often in the event of a tie which, again, would become increasingly likely the more players you had around the table.

As an art piece, Hidden Leaders is something of a delight, and it’s worth looking through the card art, reading the names, etc. As a game for two players, it leaves something to be desired – but I think if you’re someone who regularly plays party games and could get a group of four or more involved, it would become a very different experience altogether.

I Love the 80s: An Interview with Kreg Mosier

Only Trust Your Fists: The Side-Scrolling Beat-‘em-Up Vibes of Streets of Steel
Previous Post