There are some books on my shelves that aren’t really meant to be read, I don’t think: gallery books of special exhibits at colonial art institutions, glossy concept art from videogames with writing in languages I can’t speak, the banged-up copy of House of Leaves my ex’s sister passed on to me when I helped her move apartments two years ago. There are other reasons we go to the medium, of course – reference, representation, record – and then there are the books, or games, or sculptures that don’t have an intended function as much as a conceit. A subversive design that says something more than its medium often makes apparent, a disruption of purpose that literally crosses form. This transformation happens in the De Stijl furniture of designer Gerrit Rietveld that I wouldn’t want to sit on, in the heightened violences of 5RS’s Don’t Shoot the Puppy that wouldn’t be “fun” to play, and in Ryland C. Quickbear-Stalder’s Alaska for Looking.

The alphabetical arrangement of Alaska for Looking brings attention to the nonmaterial components of text as a mode, and to the construction of the novel as a form rather than material object. Like monkeys writing Shakespeare or a library, some organization of these words that could be described as “ultimately arbitrary” is the novel that I have read, that launched this other author’s career, and inclusion in an 11th grade English curriculum was challenged by residents of Depew, New York, in 2008 for its “pornographic” content. 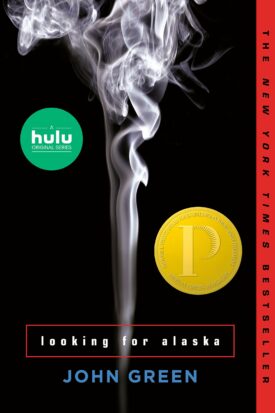 Looking for Alaska, the YA novel about a teenage boy obsessed with famous last words and the titular deuterogamist he falls far, sits in that moment we learn that others are truly other, that their lives don’t revolve around ours, and that they’re not something with any sort of rational logic to divine, or “read.” There’s a great irony here in the many levels of conflicting interpretation throughout the novel’s life. At the level of text, it’s that Alaska is the quintessential manic pixie dream girl, and in some interpretations, Looking for Alaska is nothing more than the epitome of everything Olivia Gatwood indicts in her poem on the subject. But the book is also a great subversion of the trope. Miles, who thinks himself more precocious than he really is, always thinks he knows Alaska even as he’s constantly proven wrong. The story is about her being less mysterious, but more unknowable than he assumes. Human with all the contradictions.

Take Alaska’s last words. The novel is divided nearly in half by a fateful day, and each chapter is counting some days before or after the night she dies. Even in death Miles sees her as an ideal, remembering her last words: “This is so fun, but I’m so sleepy. To be continued?” But of course, those weren’t really her last words. The novel itself makes this clear. We can check a few pages back and see that Alaska’s last words were a frightening and confusing “God oh god, I’m so sorry” said between sobs like “childlike half screams.” Driving the point home, we learn in the book’s conclusion that those weren’t even truly Alaska’s last words. She talked to someone else, not Miles, on her way to her car the night she crashed. After all, love, last words and death are all less poetic than we imagine as children.

Miles’ learning to see Alaska as a whole person helps him confront the central question of the book, also posed by the deceased girl. And like all proud high school introspections, it is a matter of homework. An essay prompt: “How will we escape this labyrinth of suffering?” These are kids (this is a YA book, remember), who are for the first time, facing an existential question. Having first confronted their fragile mortality, the real thing that the question – or attempting to answer it – gets at is where each character finds meaning, purpose, in the refigured Sisyphean struggle of living through meaningless, meandering loss.

Another conflicting interpretation. There are 17 instances of “sex” some 60 pages into Alaska for Looking,  but Alaska for Looking won’t ever appear in the American Library Association’s lists of the most challenged books in schools and libraries across the U.S. The then-novelty of the accusations of “pornographic” content and immorality leveled against Looking for Alaska in Depew in 2008 prompted an exegesis by the author, which formed as a statement of intent. There was no disagreement about the literal events in Green’s chronological arrangement of the words, but, as the author framed the controversy, a weak misinterpretation done in bad faith from a patronizing worldview. Still, the next decade of the book’s publication illustrates that intention can and often is rejected. Looking for Alaska has been repeatedly challenged to this day, and the author has responded again and again.

And none of that – Miles’ existential confrontation with the Other, the humanization of the manic pixie dream girl, or the controversial characterization of its protagonists as sexual beings – is in Alaska for Looking. In Green’s own words, Alaska for Looking is “a novel that I knew turned into a strange uncanny version of itself.” There is a suggestion there that it is the same novel, another meaning of the words. There are no theses to be found in its 90 pages – three of which are a block of consecutive “and” – and there is not much in the way of story for me to share. But though Alaska for Looking is not about chronology, it is also not just about alphabetization. These words can, in collaboration, form such beautiful poetics as “hygienic hyperventilating hypothetical hysteria i i i i…” The phrase made all the more compelling by the nature of which it arose, a decades long collaboration between two authors not in correspondence with one another. Thus, the obfuscation of meaning-making becomes a central theme of Alaska for Looking: meaning imbued by a creator, meaning conjured by a reader, meaning found in the arrangement of all the parts just so.

…the History of Me

How to Build a Racetrack