I wanted to walk along the rail lines in the first Grand Theft Auto but if you stood on them for more than like a few seconds you’d get electrocuted and it killed you straight away. And then there was this one mission, at the start of the second level, which is still in Liberty City, where you have to rescue some guy’s prized dog that’s been kidnapped by throwing money to the kidnapper off a bridge onto his boat as he goes under, and I drove round the whole game looking for the boat because I thought if they put it in that mission it must be somewhere that I could get it as well, and explore all the water sections, which again, you couldn’t go into, because if you fell in the water and tried to swim you died. And it was actually not that many years ago, probably 20 years or more since I first played Grand Theft Auto when I was seven, that I actually looked up whether or not there really was a helicopter you could find like, for some reason, I had it in my head that there was, back then. And there’s not. And the rail lines just go in short, closed circuits, and there’s no boat – although you can use console commands on the PC version to make one spawn and use it like a car, but it goes slow and handles bad.

So it’s like, Head Radio, which is the pop music station, and it plays every time you get in a Bulldog or a Portsmouth or a Mundano, it’s like meant to sound like a radio show, with a DJ called Eddie Simmons and a countdown to the chart top five and this announcer that says “coming up next, the news and travel reports.” But if you go in the game archive it’s a single ten-minute audio file that’s not separated into songs or adverts or VO or anything, and it just loops, so that when you hear the big “You’re listening to Head Radio” jingle it sounds like it’s cut into the middle of the broadcast, but it’s actually just the loop restarting. Eddie Simmons has I think one line he says, and the news and travel reports don’t actually happen, which is like how the payphones keep mentioning these guys the Vercottis and Bubby and Bald Man Sonetti, but you don’t see them or talk to them or anything – it’s you on your own, and when the pager comes up at the top of the screen and says something like “drop the car at my place and come in for some coffee if you want” all you do is drive the car into a garage and it says “MISSION COMPLETE” and you don’t see or talk to anybody. 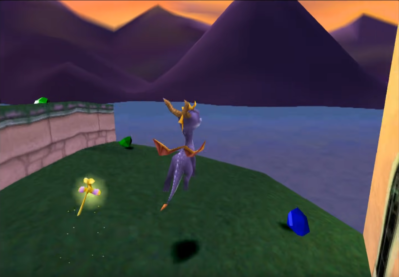 And I used to want to walk on the rail lines because it was like there was this whole world going on elsewhere and being seven or whatever I’d imagine there was some way you could kind of break through the surface level and access it and if I walked on the rail lines they’d eventually go to some like hidden area where all the other characters were and you could somehow get into this bigger world that was always implied. I saw this YouTube video about the first Spyro the Dragon and this section of beach you can stand on and look over the water and the skybox has all these hills and a building or something on it, and the guy was talking about how it made it seem like you could maybe just get there and again this whole other world existed, and the thing is that’s actually what games do now, which is provide you these massive worlds and all these characters and things to see, and you actually can go there and actually can do it all but it’s made me feel like actually now I’d rather it was all smaller and dialed back and implied and off-screen, because I hate this idea that games have gotten so big they basically replace your life – and tell you you’re not getting the most out of them and doing everything unless you let them replace your life.

Which I suppose is a kind of long way of saying there’s this kind of irony or poetry or whatever to the fact videogames have become what I wanted them to be when I was a child and now I’m an adult I want them to be more like what they actually were, when I was a child. There has to be something more severe and concerning and meaningful about the fact games now – games that are meant to be the cutting edge of what games can be – are basically delivering what I wanted when I was a seven year old. Is this all there is, scale? I don’t feel any more like I cover games as a culture but more like games as in “the same five or ten games that are all anyone really plays or can play because they’re so big and keep getting bigger.” It’s not games as a like concept but games as a plural. I cover and write about not games in the encompassing, royal kind of sense, but games as in some games. Or maybe that’s just true of everything, that what you want when you’re a child you end up getting as an adult and then you want what you had when you were a child.

The Fresh and Vertical

Another Meaning of the Words