At times I have traced the line of uninformed decisions, mere coincidences and random happenstance that has led to wherever I am currently thinking about this teleology – usually in the presence of another person I cannot think of being without but who I very nearly missed. My favorite books have similar histories, means of finding their reader at the right times.

In November I began reading Canadian children’s author Kyo Maclear’s autobiography Birds Art Life because the book club I sporadically participated in was reading it. I had just moved to New York at the end of summer, and it was my best companion as a recent transplant. I read the book on the subway and in the park. In my memory I am reading it in my apartment on the couch that my roommate did not buy for another two months. It was this comforting.

We shared sick dads, and complicated mothers. And hers was the first I have ever felt as a companion to an author’s voice. She spoke: “There are moments when what we need, what will benefit us most, is the power to style our own stories.” But I have always worried that my story was already over.

Ever since I graduated high school, I have recoiled from any fondness towards who I was, a preemptive shame that often accompanies transfemininity. Though, I was also worried of looking nostalgic. Worried I would become a failure looking back at what I considered a better time in my life. I never wanted to go back. 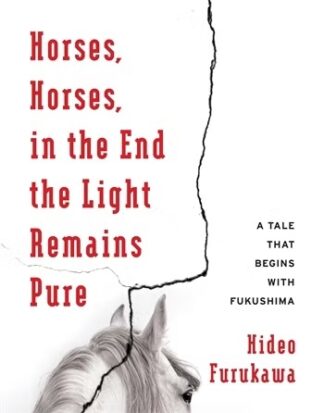 In his 2016 novel Horses, Horses, in the End the Light Remains Pure, Japanese novelist Hideo Furukawa surveys the people and the land of Fukushima after the 3.11 triple disaster. The prose, which emerges in the weeks after the initial earthquake and reaches into the months of aftershocks and years of a prolonged bureaucratic-turned-natural disaster, is a first-person account of writing in a world shattering into pieces.

Like Furukawa, I would write to assure myself of writing in a time of disaster. And like him, I would write increasingly towards home. “I never thought that literature is useless” he assures his paralyzed self, “No doubt about that. The problems came with genre.” So, the novelist would return to his childhood home near Fukushima, amid the horses. But due to the earthquake, and time, Furukawa’s homeplace was now alien.

I was merely a college graduate dropped into a crippled market and a housing crisis, fleeing towards the suburbs of south Florida. It was not the land, but myself that felt alien.

Such a homecoming is the subject of “Toward Crescent Park,” a song by DC power pop band Bad Moves. Across the verses, the once familiar landscape transforms into a reflection of the unfamiliar self. “You can’t shake the likeness you see ‘cause somehow, it don’t match your memory” becomes “This shape, this frame, this silhouette don’t match with the portrait in your head.” There can be shame in returning home so different. I wrote about these queer orientations too, the way such spaces impress upon us, making us feel suddenly alien. Weird Autumn is not supposed to return to home, if ever this really was one.

So, I hiked, and I wrote, and I wrote about hiking. It felt like I was writing myself out: of an industry I could no longer separate from the worst of itself, of the eternal Florida summer, of my very childhood home. That writing felt like it was building toward something, perhaps the way Furukawa’s was building toward the book I read for the first time on a bus in upstate New York last fall. We both found writing in returning home, though it did not invigorate me to continue when I left.

Living through my first winter, living in New York, I began to understand what Rebecca Solnit meant when she described writers as “solitaries by vocation and necessity.” “I sometimes think the test is not so much talent,” she said, “but purpose or vocation, which manifests in part as the ability to endure a lot of solitude and keep working.”

I had lost my purpose, and I ran from solitude. I had never needed to make time, my days growing up in Florida always seemed overfull with it. But here I fell in step with the rhythms of city life, which is both more syncopated and also faster paced.

It was not a peaceful lull, but a tumultuous period of insecurity. Not self-doubt, but self-loss. I did not know what to say, and I began to believe, despite scrapped drafts, half thought-out pitches and notebooks accumulating ideas, that I did not have anything left to say.

In the fall it felt like my story was ending. I had sought what was in a name, a means to an end I did not reach. I thought of a line from Lewis, a line from her favorite book: “The world had shattered into pieces and Psyche and I were not on the same piece.” My writing disjointed. I burrowed.

I have only recently begun to feel homesick. I miss the Florida sky—the enormous visible round of the horizon. In winter I felt the cold might not end; in spring I began to suspect that my story had not yet begun. I remind myself:

This is all still prologue.

No one here needs you to be anybody.

No one here needs you to be anybody.