It’s not uncommon for people to yell at the TV while they’re playing video games. Most of the time it’s something along the lines of, “Oh come on!” or “I dodged that!” or a rather generic “What the hell!”  During the last two years, however, I can safely say that the words I most often hurled at the screen (usually while covered in sweat and panting in-between curses) were, “I’m trying, Maya!”

From March 2020 until very recently, I didn’t go to the gym. The pandemic restrictions made that decision for me at first. Later on, my disappointment with other people’s hygiene and selfishness kept me away. But I still wanted to workout, even in the muggy heat of summer or the frigid heart of winter. My solution was simple; dig out my old Wii, boot up My Fitness Coach, and make a new profile to replace the one I hadn’t touched in close to five years. Thus began my workout routines with Maya, the titular coach of the game.

I’m going to start out by saying that My Fitness Coach has no right to be as grueling as it is. To this day, I don’t know if the developers were looking to improve people’s health or simply punish them for trying to get in shape. The cardio workouts would send my heart rate sky-high and leave me dripping with sweat. Core workouts left my abs burning into the next day, and flexibility would stretch muscles I didn’t even know I had. Among all the options, the yoga workout has probably been my most frequently used routine. It’s what ends my days more often than not, what stretches out my hamstrings and motivates me to keep going. And it’s also why I’m writing this review. 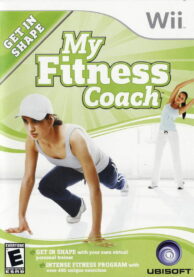 During a brief period where my Wii was down (toasted power cord), I tried to find a good alternative to home yoga workouts, just in case the whole console was cooked. In that quest, I’ve realized that no one has quite captured that initial energy of motivation, positivity, and limit-pushing that I found in the original My Fitness Coach. It’s a uniqiue artifact from the time when a whole console was dedicated to getting you up and moving, and came with all the tools to facilitate that sort of physical activity from the player.

My Fitness Coach wanted to know full specs on your body and health in a time before that information could be easily peddled to other interested parties. There’s no shame in me sharing my current weight or my heart rate after doing a minute’s worth of jumping jacks; those stats will always remain between me and Maya. I pick a goal and make a workout schedule, and Coach Maya holds me to it. If I was consistent with my routine, Maya would cheer me on for showing up. If I skipped my workouts for a week or so, Maya’s words became gentle censure, informing me that I’d missed my sessions with her. It might not sound like much, but in the grand scheme of things those little pre-recorded messages were surprisingly good at getting my butt off the couch for at least a 15-minute bout of stretching. And having tried other yoga programs now, I can see how those simple statements represent a greater deal of care that was put into Maya’s design, making her seem less of a computer character and more of a trainer.

I picked up Yoga Master for the Switch recently, just to compare the yoga workouts between the two games. Despite the fact that Yoga Master came out more than a decade after My Fitness Coach, it barely holds a candle to the structure and design of an old Wii game. Yoga Master sells itself on customization; you can pick your trainer, music, background, and most importantly, the moves for your daily training. There are several pre-programmed routines to choose from, but if you want something that specifically targets, say, your core, you can select moves that focus on that part of your body, with varying degrees of difficulty. All of that sounds lovely, until you put it into practice.

The disadvantage to Yoga Master’s customization is a lack of overall cohesion. You can string twenty yoga poses together, and they’ll always feel like twenty separate sections instead of one unified workout. Each move has you start by standing tall (or in mountain pose, whatever floats your boat), do the pose, hold pose, return to start. That sounds fine, until you run into the chunk of your routine that has three poses in a row requiring you to be on your knees or back. Yoga Master doesn’t recognize that the best way to keep the flow going is by letting the player stay on the ground during this stretch, and instead has you kneel, pose, return to standing, and repeat until you’ve done more up-and-down maneuvers than a Catholic at Easter mass. It’s like Yoga Master knows to lay out several beads in a row but can’t figure out how to thread them together and make a necklace. Your workout feels like a clunky and piecemeal affair, instead of a training session you can fully sink into. 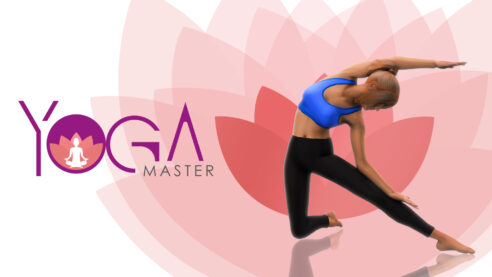 My Fitness Coach received accusations of being repetitive when it came out, and to be fair there are definitely less overall moves than what you’ll see in Yoga Master. But I don’t mind this at all, because My Fitness Coach obviously exchanged variety for better structure and flow. My yoga routines start with high intensity stretches and poses that naturally shift between downward dog, plank, crocodile, downward dog, and standing. There is definitely some of the up-and-down transitioning I was talking about earlier, but it’s deliberate and allows the player to smoothly shift between levels. As the workout goes on you’ll move to lower intensity positions, and eventually end with gentler poses, alongside ones done completely on the floor. The specific moveset will vary from one workout to the next, but the overall composition and intensity follow a comfortably predictable pattern. I know that once I’m on the ground and folding forward to grab my ankles, I’m unlikely to pop back up for another round of pyramid airplane or dancer poses.

The guidance during the poses themselves also left much to be desired in Yoga Master. I would go so far as to argue that Yoga Master is a terrible introduction to yoga, because it offers very little guidance on the movements themselves. The game may have proper names for each move on-screen, but the actual directions from your “coach” typically boil down to “follow my lead” and having to crane your neck to watch the TV instead of doing the pose. There’s no feedback to help you decide if you’re balanced correctly or engaging the right muscles; you’ll get more verbal direction on breathing in and out than how to position your legs and arms. There seems to be an expectation that the player already knows dozens of moves by heart. Overall, players of Yoga Master are treated as though they need assistance more with timing than executing the movements.

My Fitness Coach makes no such assumptions. My Fitness Coach, in fact, operates on the belief that you have forgotten every step of a particular pose or flow since the last time you worked out, and need extensive guidance now. Most yoga exercises repeat in sets, and Maya will spend the first round walking through how you should, say, straighten your knees and turn your hips for a triangle pose (or Trikonasana if you prefer, My Fitness Coach did not use any Sanskrit names). Maya will guide you along through the moves, reminding you to tighten your abs or make sure your weight on a lunge is evenly distributed. And that’s all besides the ‘Tutorial’ button you can select for any move that’s left you utterly confused. While some people might interpret all this as a patronizing means of coaching, I never took it that way. It feels like gentle encouragement, and works as a safety net to make sure you’re using good body mechanics doing moves that can seriously hurt you.

There are other bits of care sprinkled throughout My Fitness Coach designed to keep the player coming back. Maya is clearly fit, but dressed in sweatpants and tennis shoes with the vibe of a workout buddy who just met up with you at the gym. You’re happy to have this NPC lead your exercise routine, because her design is friendly and welcoming. At the beginning of most workouts (and after each section) Maya will check in with the player to see how they’re feeling, and if they need something higher or lower intensity on subsequent workouts. Instructions will be interspersed with cheers of “Go, go!” to help you get through that last 10 seconds of movement. And your workouts always end with Maya’s, “Be here again on (blank)day for your next workout!” to remind you of your next scheduled session.

There is no set schedule in Yoga Master. There are no guiding principles of transition or flow to dictate the workout routines, no genuine engagement from the handful of dead-eyed “coaches” you can pick from. There is no progress to chart except whatever you wish to keep track of yourself, no demand of accountability other than what you’re bringing to the table already. The freedom of choice and customization is an excuse to minimize the amount of effort the game needs to put into your workout, nothing more.

If you’re wanting to indulge in a good at-home fitness program (and still have a Wii lying around), then I strongly recommend My Fitness Coach. It may be fourteen years old, but it’s still one of the best fitness games I’ve ever played.

Doing Your Job in The Westport Independent
Previous Post

A White Savior Almost Lost in the Inviting Scenery