There are glimpses of a good game in Mandragona’s first release. Crafting dozens of different items gives the game momentum, and rare nuggets of a
dark, psychological story keep you clicking. But the frustrating combat, bad UI, and downright confusing design keeps Skyhill far from soaring.

In the aftermath of World War 3, Perry Jason is holed up on the 100th floor of the Skyhill hotel. After chowing down his last can of beans, old Perry must fight to the street level, and hopefully, safety. Each floor is divided into three rooms; a stairway in the middle, and guest rooms on either side. The action is driven by a hunger meter which ticks down with every room you enter. It gives a sense of real survival as you push down one floor at a time.

As you travel you’ll fight plenty of grotesque mutants twisted by fallout from the war. Scavenging, and taking on the beasties nets you skill points which you can dump into basic attributes, and, in turn, allow you to wield better weapons.

Skyhill touts itself on being a difficult rogue-like, but the reality is that it relies on dice rolls. Loot drops are random, so while you might be deliciously slathered in food and medkits in one game, you’ll suffer a 20 floor drought in others. Combat is equally as random and twice as infuriating.

When going toe-to-toe with the goons, Perry can take a swift chop, or take an aimed shot. The aimed shots are essentially a risk/reward affair whereby you sacrifice your likelihood of hitting for more damage. Though, it legitimately seems like the developers snuck in some behind the scenes magic to smudge of the probabilities and make the game “harder”.

Take 20% off each of those and you’re closer to the truth. I’m on to your trickery, Mandragora!

This is by far the worst part of Skyhill. The Mandragona don’t seem to understand the rogue-like formula. Games like Rogue Legacy and Spelunky kill the player constantly, but when they do, it’s always clear what you have done wrong. You can learn from your mistake and do better next time. There is no way to improve when your only mistake was the random number generator running against you. Crafting is what ultimately becomes the best part of this game.

The game’s crafting is done in your makeshift base back on the top floor which you can hop to and from with conveniently placed elevators. Constructing new weapons, cooking food, and light base building is handled here. Improvements to work stations unlock new recipes ranging from a cobbled together hammer, to the literal Saw Cleaver from Bloodborne. Skyhill doesn’t mind going crazy with its implements of mutant murder.

The base mechanics make the backbone of what’s fun about Skyhill: Clearing a few floors before returning to the hub to eat, sleep to recover health, and see if you’ve gathered enough wire and scrap metal to build your next weapon.

As you trudge down toward the street you’ll encounter plenty of notes which try to flesh out the world. Mandragona is a Russian studio and the writing has an air an author who doesn’t speak English quite well enough to pen a game.

The tone is all over the place. It’s most comfortable in a style most reminiscent of a depressed teenager’s Tumblr. I found multiple accounts of children being ripped apart by monsters, and mentally broken spouses turning on their loved ones with claw hammers. That doesn’t stop it from jackknifing into irreverent jokes about eating canned beans and making Skyrim references, though. 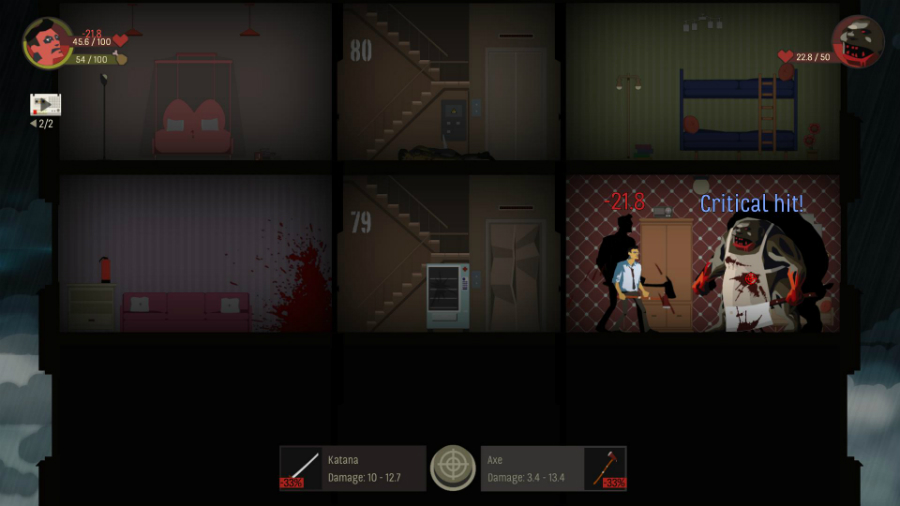 Skyhill certainly has the look of an iPad game. Why it’s not on the app store is beyond me.

The most engrossing story beats are the kernels about your character. As you explore, you will piece together who he is by finding unique notes and responding to eerie text messages. These serve as a compelling breadcrumb trail that drives your decent despite the atrocious combat.

In the end, Skyhill has few core mechanics that save it from being flat out egregious. Unfortunately the moment to moment beats of the combat and world building are downright bad. The game legitimately becomes more fun when you drop it down to easy. You’re finally afforded the time and resources to engage with the fun parts of the game, and don’t waste your time missing an 80% chance to hit a fourth consecutive time.

Rive: A Clash of Intent and Execution
Previous Post

Unwinnable Presents: Unlistenable Episode 62 – If You Have Ghost