As protagonist Ezio Auditore reached the Bosphorus port, Assassin’s Creed Revelations introduced its layering skyline of connecting rooftops with date trees peeking out and minarets spread across with beautiful mosques at their base. Divided between Asia and Europe, the Istanbul map (also called Constantinople in the game) was a large city with monuments reflecting its history as the Hagia Sophia stood tall on one side and the Galata Tower on the other. Along the cobblestone roads were buildings with intricate designs that lined the walls, windows, doors, and balconies. The land was amid geopolitical clashes between the Ottoman Empire and the remnants of the Byzantine, portrayed as the archnemesis of Assassins called the Templar Order. This contentious landscape married architecture from Islamic and Christian rule. When Assassin’s Creed Revelations released in 2011, it was the first time I saw a Muslim-majority region that was vibrant and bustling – unlike the usual demeaning portrayals in military games or even the dreary Levant in Assassin’s Creed.

Scattered mosques along the horizon and intricate Islamic architecture are a familiar sight to many Muslims from Muslim-majority cities. Although I’m not familiar with the Turkish landscape, it reminded me of my home city – which a different Islamic empire ruled a long time ago – and the evolution of art and architectural development has always fascinated me.

Over a decade later, I’m still coming to terms with how one of my favorite games so completely charmed me with an inviting scenery of mosques and Islamic designs to bask in that I glossed over Ezio becoming the white savior. Ubisoft took the story away from the Ottoman Assassins and made Ezio the star, completing his trilogy in the series.

Set in the 16th century, Ezio ventured to find hidden Masyaf keys to uncover a secret about the otherworldly artifact of Eden before the Templars could. The focal destinations in Istanbul were architectural landmarks – which the story naturally led players to – but I’ve snuck in extra visits to admire the view. The terrace in Topkapi Palace looked off onto the water as it sat next to open gardens where rugs and pillows decorated the floors, and arched doorways bordered the area. By the end of the game, my phone gallery was full of designs and scenery that I could reference in my high school art class at the time since my art concentration was Islamic designs. A few years later, I visited the Art Institute of Chicago and discovered an Orientalist painting called Circassian Cavalry Awaiting their Commanding Officer at the Door of a Byzantine Monument; Memory of the Orient by Italian artist Alberto Pasini from 1880, reminding me of the buildings in Revelations. 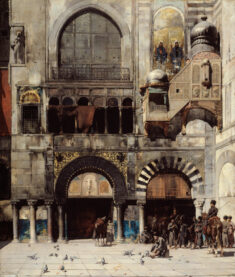 Although Orientalist scholars and artists existed in Europe for centuries, this genre peaked in the 19th century when Western travelers colonized European-occupied lands. White, male European artists depicted fantastical lands to their East based on stories or their own expeditions to those lands. They photographically painted exotic, mystic cultures and Islam, when really the art was imaginatively staged. It othered the people it depicted or was used as cultural propaganda to show a backward region where white saviorism was needed.

Ubisoft took an Italian Assassin from the past two games set in Italy and randomly placed him in an unrelated destination. Even after playing through Revelations, players weren’t told why Istanbul mattered in this story. The game featured playable flashbacks to Assassin’s Creed’s Levantine protagonist Altaïr Ibn-LaʼAhad in the 13th century, who asked European explorer Niccolò Polo to hide the Masyaf keys. Niccolò chose Constantinople since he was heading back there before returning to Venice – giving a shallow purpose to the Anatolian Peninsula and further making the region an exotic backdrop. Niccolò’s quick mention of Constantinople connected the dots from Altaïr’s 13th-century keys to 16th-century Istanbul through the long-lasting Byzantine presence in the region. There was Venetian and Greek presence in Byzantine Constantinople for centuries, but the story of the Masyaf keys centered around that history instead of the Ottoman Assassins. Assassin’s Creed games deal with politics, empires, religion, and historical figures, but at the core of every story is an Assassin guild.

While searching for Niccolò’s trading post, Ezio discovered that it became a bookshop of Sofia Sartor. Sofia was another Venetian character – the only influential woman NPC in the game – who helped Ezio find information about the hidden keys and books across Istanbul. Secrets in Istanbul didn’t incorporate the Ottoman Assassins and Revelations relied on European characters to unfold the story.

It was bewildering how Revelations introduced the Ottoman Assassin leader Yusuf Tazim as a charismatic and likable character who hoped for a better future for the people around him, only to become a supporting character even when he shows so much passion for his city. Yusuf regarded Ezio as a mentor, but after being guided by Yusuf and learning tricks from the Ottoman Assassins, Ezio quickly went from being a mentor to becoming the one in charge. One of the first tasks Ezio takes on in Istanbul was Den Defense, where players lead the Assassins to protect their den – giving more legitimacy to Ezio’s power. He also became a diplomat and spy alongside Suleiman, the grandson of the Sultan, and tracked the actions of his uncle, Prince Ahmet, after just having learned about the empire’s royalty upon arriving. Actions by Ezio determined Istanbul’s future with the fight against the Manuel Palaiologos to diminish the Byzantine influence and defeat Prince Ahmet to restore the Ottoman throne. 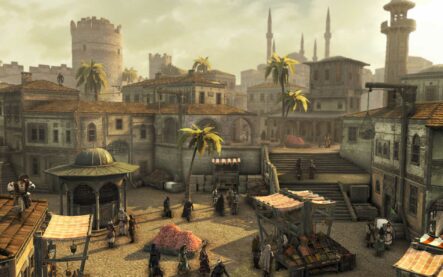 Near the end of Revelations, Ezio personally requested Yusuf to stay behind and watch over Sofia before he left for rural Cappadocia to get the remaining Masyaf key and fight off the Templars. Shortly, Ezio rushed back to Istanbul only to find Yusuf dead in the bookshop and Sofia missing because of Prince Ahmet. Angered, Ezio riles up the Assassins to get revenge for Yusuf’s death, then heads to save Sofia before returning to Masyaf with the keys. I wanted to see more of Yusuf and was caught off guard by his demeaning death that was used for Ezio’s vengeance. It seems like Ubisoft made the non-white characters to help Ezio’s journey, making him the mighty savior with the help of his Venetian love interest.

Ezio became a prominent figure in helping the Ottoman rulers gain a steady foot and find the Eden artifact. Sofia helped him achieve that, and Niccolo’s past guided him. However, Yusuf and the Ottoman Assassins’ significance lessened throughout the game. It feels like this story could have taken place anywhere outside of Istanbul since it didn’t matter to Altaïr’s flashbacks, Ezio, or the Eden artifact’s story and was simply a pretty destination. I was enraptured by this pretty destination because it proved that games can go beyond showing toppled mosques and cities of rubble inspired by recent wars that don’t conjure up good sentiment. However, Assassin’s Creed Revelations was a sight for sore eyes. Assassin’s Creed games fictionalize real-world history, but along with near-accurate depictions of monuments, they often highlight its regional characters in a meaningful way, which Revelations didn’t do. Revelations is bittersweet because it showed me that games are capable of atmospheric Islamic design, but it wasn’t enough to redeem the white, European protagonism.

Saniya Ahmed is a freelance writer who loves talking about sci-fi, history, culture, and art influences in videogames. Twitter: @saniyaga

Made of Lines and Vines, Regular Features

Working Out with Maya