I spent some time working as a prison chaplain, and now I work as an editor. As The Westport Independent shows, these two jobs aren’t as different as you might think.

I’ve long seen editing as a service job—not in the sense of baristas or waiters, but in a manner similar to the work I did as a chaplain. There’s a discernment process I support writers through, especially new ones, guiding them through learning to communicate their private selves to the public world. Editing asks me to be intimate with the rhythms of someone’s thoughts and all the hopes, fears, and ego behind it; it tasks me with protecting
that unique nuance without being precious. It asks me to walk the tightrope of pushing a writer to let go of things that don’t serve them, to stay true to themselves while still pleasing their readers, those as-yet-uninvited guests who will be the ultimate arbitrators of a piece’s success.

In The Westport Independent, you play as the editor of a small paper tasked with seeing your writers through your country’s shift to a totalitarian regime. You juggle the government’s demands against the marketing needs of your paper against your stable of four writers’ personalities and politics. 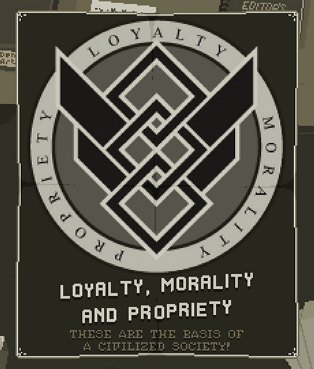 The actual editing process in The Westport Independent lacks nuance—you remove certain sentences wholesale rather than tinker with the wording, and your choice of headlines tends to fall too easily to the leftist or rebel side. The game’s systems lack the subtlety and tension of Papers, Please, from which it clearly draws heavily; its gray areas are far more monochromatic than Lucas Pope’s border bureaucracy sim. But as an editor, I found the game to have an emotional complexity I was unprepared for.

I labored over my choices of stories and assignments far longer than any decisions I made in Papers, Please, weighing the swirling demands of government and sales against what would make my writers happy. One of my writers was a staunch radical, but when the government sent me a threatening letter about her leftist leanings, I was forced to assign her a conservative piece to take the heat off. I knew she wouldn’t like it; when she refused the piece I forced her hand. Her happiness went down, and she grumbled to the rest of the staff over coffee and cigarettes the next morning, but it kept her with the paper—and, more importantly, alive—to the end of the game.

When one of my writers disappeared without warning halfway through the game, I was honestly shocked. I worried I hadn’t been careful enough, thorough enough, kind enough. Had the government taken her? Or had she quit, tired of my refusal to take a political stand? It just never seemed like a good idea, I had reasoned. I hadn’t caved to the government’s propaganda, I just hadn’t poked the bear. Clearly it hadn’t been enough. I never found out where she’d gone. I never found out if it was my fault.

As the game progressed I started to envy the staff huddled in their morning cabal, bickering amongst each other and badmouthing the paper. They seemed unaware of the hours I spent alone at my pixel desk, shuffling papers, tweaking numbers, and shifting assignments, all in service of making them happy. They were ungrateful, as writers can sometimes be, because that’s part of the job, too.

As their editor, I was ultimately here for them, even when it didn’t seem that way. I had to shield them from the truth, not just because the game didn’t let me interact with them except through file folders and strikethroughs, but because I had no other role in their world than helping them do what they do best: write good stories. They didn’t know, but then again they weren’t supposed to. That wasn’t their job.

That radical writer I kept alive had some nasty things to say about our paper in the game’s closing credits. We began the game as an independent press and ended as mostly a celebrity gossip rag, with the occasional but steady left-leaning piece hidden away in our back pages, the headlines usually more inflammatory than the content of the pieces themselves. She felt stifled and bitter; she resigned by dumping a waste basket of shredded stories on my desk along with her notice.

I wanted to take her out for coffee and explain that I’d done what was best for her, even if she didn’t like it. I wanted to explain that I had done it for her, that I understood, I did, but couldn’t she see. It reminded me of clashes I’ve had with more stubborn writers, the ones determined to stick to choices that aren’t helping them, and all the times I’ve eventually stepped back to let them make their own mistakes or put my foot down with a firmness I didn’t know I had. But it had always felt like a labor of love on my part, in real life and in The Westport Independent. The writer didn’t want to hear it. They never do. It broke my heart, but I understood. After all, it was my job.

Should You Play a Game Together?