I’ve played my fair share of racing games involving animal competitors, from Running Wild to Diddy Kong Racing. But as for the wacky robotic-animals-as-stunt-performers premise of Excitebots: Trick Racing? It’s on its own plane. For it to go unmentioned in a discussion of the Wii’s overlooked gems would be a big oversight, and it’s for that reason that the game’s re-release this week on the Wii U eShop is particularly…exciting.

Originally released in 2009 (one year after Mario Kart Wii‘s release) as a follow-up to Excite Truck, the game is often described as a blend between the snapshot mini-game stylings of WarioWare and Mario Kart’s familiar item-based racing flavor — a blend that, frankly, shouldn’t gel as well as it does. Building upon the aspects of terrain manipulation and aerial trick zones that Excite Truck offered before it, Excitebots weaved spontaneous, party-style events into the racing action, mobilizing such unheard-of ideas as weaponized dentures, butterfly rescues, collecting sandwich ingredients, as well as mid-race bowling, dart-throwing and other sports-themed activities. Not to mention simplified lure-casting that would not provoke detractors of Big the Cat’s gameplay in Sonic Adventure.

Cookie-cutter, the game was not, and with such inventiveness came a high-level race energy that felt original. It’s true the game didn’t have an opportunity to secure a wider audience through a European release, but even in North America, it was not given the support it deserved — whether for lack of promotion or because the unorthodox concept of racing against robotic insects, amphibians and the like was without the safety net of a launch window like its predecessor had. Now that Nintendo has added the game to the Wii U eShop library, I would be remiss if I didn’t rally for the game’s surprising excellence. 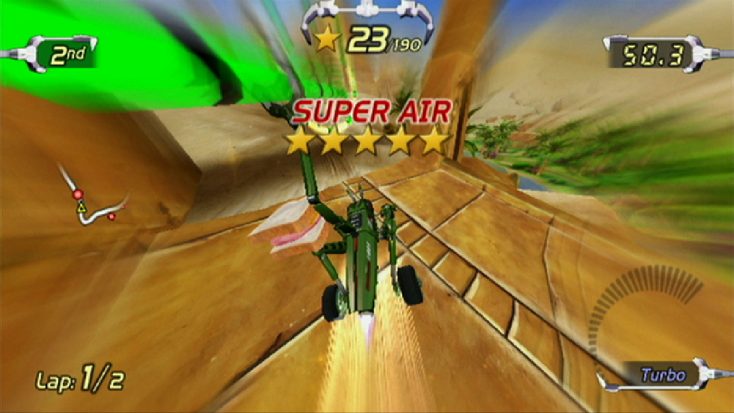 In this twisted environment of hyperized animal bot racing, you’ll find that rank leaders are not guaranteed victors, for improvisation and quick reflexes will take you further than berserk acceleration. Divergent paths are the norm with the game’s diverse, world tour-like track selection (China is littered with environmental hazards that conceal shortcuts, while Fiji couples open space with some demanding trick zones), making Excitebots a game where unexpected discoveries often lead to unexpected victories. Almost everything you do will be categorized as a stunt worthy of Stars (or points), with players even being rewarded for skirting danger by driving close to trees. Aerial gymnastics calling for more precision — releasing from vertical and horizontal bars with accurate timing, guiding yourself along a flight path of rings, or performing backflips following a bungee launch — are where player skills gain definition, and prowess is developed through experimentation.

The adaptable turbo jump mechanic also provides nuance in that, while it renders smaller hills and breaks in terrain as undiscovered springboards for tricks, there are times when using this move could mean soaring above track manipulations or trick opportunities, costing you either speed or point combos.

Without much in the way of anticipated slowdown (barring mandatory bar segments, where 10 rotations must be cleared before one can advance), Excitebots thrives on this merging of brisk navigation inviting rapid-fire decisions (supported with responsive motion controls) and the comical chaos emerging from its interactive track designs. It all comes together in a tight formula that never feels shoehorned, regardless of how bonkers the events become. 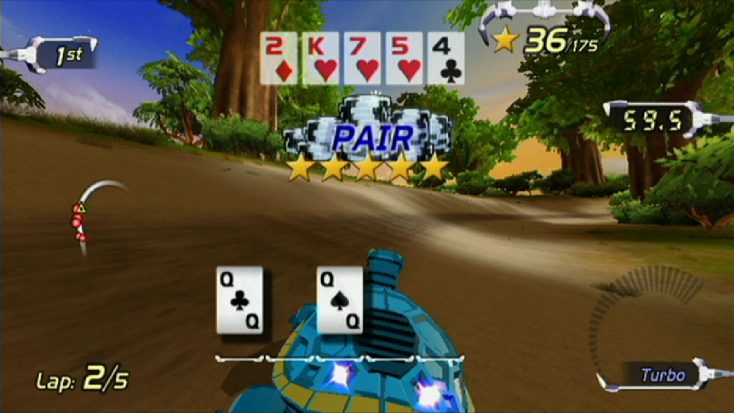 Had I been smarter, I would’ve played Excitebots more when Nintendo Wi-Fi Connection was on its way out, as I miss playing online now. While the community was never large to begin with, times where I did participate were marked with greater unpredictability than in the standard offline offerings. The game’s creative Poker Race mode — wherein players create and cash in Poker hands after collecting cards at designated areas — was its own riot, especially with a full online lobby: racers fought to stay ahead for first dibs at cards, while gauging whether to hold or disrupt hands for a possible payoff at a future checkpoint.

Though not doomed on arrival, Excitebots was sadly not embraced for the clever departure that it was, short of the small following it garnered among Wii enthusiasts. It may well be cheaper to purchase a used physical copy of the game, either online or from a local game store (compare: roughly $30 for the digital version in Canada, versus the $10-$15 you may find it for at EB Games). But even with the price not being ideal and its online functionality no longer active, there’s still tons of fun to be had if the Wii U eShop version will be your first exposure to this game. In fact, you may be surprised by how consciously Excitebots addresses what may be your preferred racing sensibilities, if fast-paced racing, accessible driving controls and engaging mechanics are your soft spots.