Ten years is a long time. Well, not really. It’s only a long time if you’re thinking ahead rather than looking back. In any case, I was just finishing up my last year in college ten years ago. Since I went on to graduate school and then became an archaeologist, you’d probably assume that I hung out in the library or something, but I actually spent most of my time at the gym. When I wasn’t out partying. Try not to judge me just yet because there’s really nothing new about any of this.

The equivalent of college in ancient Greece was the gymnasium. They actually spelled it something like gymnasion, but I won’t trouble you with any tricky pronunciation, so I’m just going to stick with gymnasium. The word comes from gymnos which means naked. People would undress in changing rooms called apodyteria before covering themselves with oil and then scraping off most of the fluid into a bowl using a stlengis, basically the ancient equivalent of hitting the showers. Apart from the apodyteria, gymnasiums had elaborate baths and some even had small stadiums attached to them. The main part of a gymnasium was an open courtyard surrounded by colonnades with adjoining rooms for each type of exercise called a palaestra. There were typically some covered porticoes in the area for practice in poor weather conditions.

Similar to most colleges around the world today, gymnasiums in ancient Greece were public institutions where young adults were offered various forms of training. This covered both mind and body. The administration was carried out by officials called gymnasiarchoi and the actual instruction was entrusted to people known as gymnastai. While the former were essentially deans, the latter were somewhere in between coaches and professors. They definitely cultivated sports like running and wrestling, but students also attended lectures on a variety of different topics including philosophy, literature and music. Sounds a lot like my own college. I can remember bouncing around between classrooms before lifting weights or spending some time on a treadmill at the gym. I tried to make the football team, but wound up washing out at the last minute, much to the disappointment of my grandfather, a professional hockey player back in the day. We can’t all be like the wrestler Dioxippus who managed to be crowned victor at Olympia by default because nobody stepped up to challenge him on account of his incredible strength. 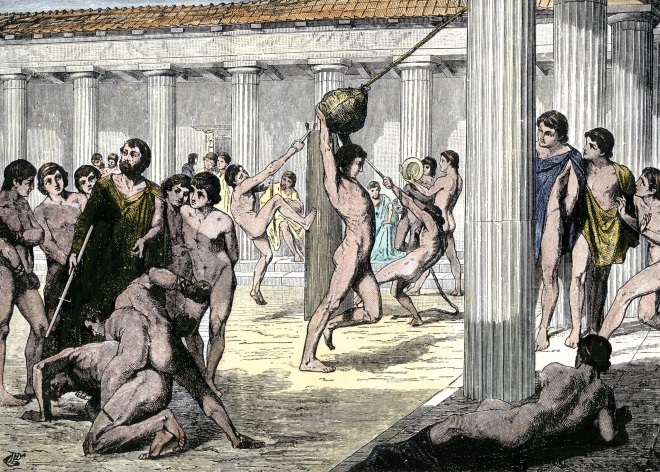 The people of ancient Greece drew a close connection between health, fitness and education. The result was that gymnasiums came to be associated with medicine, so gymnastai wound up being more than just coaches and professors. They were also doctors. In addition to honing their skills at sports and teaching them to appreciate literature, the gymnastai looked after the overall wellbeing of their students, prescribing them remedies whenever they pulled a muscle or caught a cold. They even performed minor surgeries and reset broken bones. I’ve thankfully been a healthy person, so I haven’t needed much in the way of medical attention over the years, but I made frequent visits to the kinesiologist back when I was in college. They actually had a couple of them on staff right at the gym. I guess that Pheidippides really should have announced the victory at Marathon by running to the gymnasium instead of collapsing on the steps of a legislative building known as the bouleterion. The runner might have lived to see another day.

Students these days are well known for their extracurricular activities like bar hopping and pulling pranks. The situation wasn’t any different in ancient Greece. They started going to gymnasiums when they were basically just kids, but when they got a little bit older, students developed social relationships that often lasted a lifetime. They also had legendary drinking parties. Athens for example was filled with a type of statue known as a herma which consisted of a head on a squared lower section featuring a pair of male genitals. The guilty parties remain a mystery, but on a seemingly random night, the genitals were chipped away from every single herma in Athens. The blame was pinned on a certain Alcibiades, but in the absence of any real evidence, I prefer to think that it was drunken revelers. While I could tell you some stories of my own, I’d rather not be on the record, so I’ll have to leave you hanging. I promise that I have absolutely nothing to hide. I just don’t want to be exiled to Sparta like Alcibiades.

Ten years might not be a long time when you’re looking back, but it’s enough to reflect on the course of your life. How did I end up here? I could have been somebody. I could have been a contender. Maybe if I spent more time at the library back when I was in college I’d have gotten a better job and been able to afford a house or something. Maybe. But I didn’t. Similar to everyone else, I’m in many ways a prisoner of the past.

I kind of doubt that reading more books would have changed much, but it remains true that I have to accept the consequences of my decisions. The fact of the matter is that I started out ahead of many other people, though. I at the very least got to go to college. Head to the gym. Spend time at parties. Lots of people have needed to struggle just to gain anything at all. I think it’s worth remembering that privilege is a real thing when we look back on our accomplishments even when they’re nothing special. Maybe most of all when they’re nothing special.

…the History of Me