I’ve always found there to be something slightly unsettling about the style of architecture known as Brutalism. With its geometrical forms and patterns, Brutalism looks so artificial to me that it seems almost supernatural. Take a look at some structures in the style and you’ll soon see what I mean. They definitely look man-made, but these buildings just don’t seem like they were created by human hands. Something about them is a little bit bizarre.

Brutalism is probably best known for being blocky. Because technology hasn’t always been up to the task of rendering detailed graphics, you shouldn’t be surprised to learn that Brutalism has been featured in more than a few games over the years, but this particular style of architecture found a truly fascinating expression in Control. The developer behind the game, Remedy, took the supernatural aspect of Brutalism and really ran with it. This came through quite clearly in the level design.

The game takes place inside a structure known as the Oldest House. The origins of this building are supposed to be unknown, but a governmental organization dedicated to the study of supernatural phenomena called the Federal Bureau of Control has apparently turned the Oldest House into its headquarters. The building is a beautiful example of Brutalism, but you should probably know something else about the place, too. The structure is connected to several different dimensions through points of contact known as Thresholds. Because they don’t behave by the same laws of physics, Thresholds twist and tear the internal topography of the Oldest House in some pretty strange ways. This caused the Federal Bureau of Control to set up special equipment at a series of stations called Control Points in order to contain them. Something has apparently gone wrong, though. The special equipment seems to have stopped working, so if you take some time to explore the Oldest House, you’ll find the structure in a sorry state.

Walk up to a Control Point and you’ll see a bunch of blocks and slabs that appear to have been awkwardly placed around a black pyramid. Standing at the center of a Threshold, these are supposed to be points of contact with another dimension, so they squeeze and stretch the fabric of the world around them. This apparently caused a variety of different spatial distortions. Benches for example can be found on some of the ceilings. You’ll come across quite a few staircases which look like they’re climbing up the walls. Pillars poke out all over the place. When you stabilize a Threshold by putting its Control Point back in order, the special equipment straightens out the spatial distortions caused by the black pyramid, so you’ll see the Oldest House changing shape. The blocks and slabs rotate around each other as they rearrange themselves into a much more familiar form. This bizarre mass of materials turns back into a building. 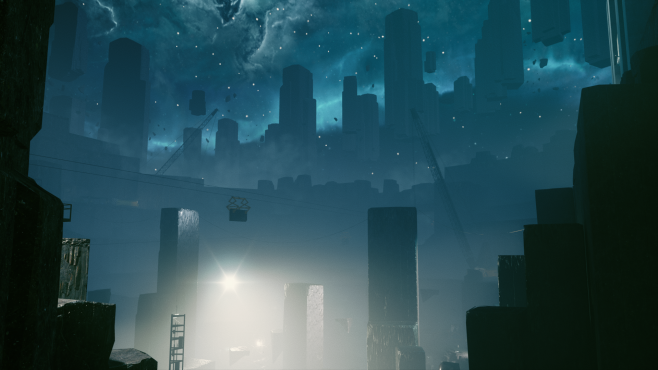 Remedy worked the supernatural aspect of Brutalism into the level design, but also found a way to make use of it in the story. Because you need a little bit of background knowledge to notice, you might not have picked up on this, though.

Brutalism was about influencing behavior through architecture. They didn’t come up with it, but the people who set the movement in motion, Peter and Alison Smithson, wanted to create an even playing field when it came to social interaction. They insisted that Brutalism was an “ethic” as opposed to just an “aesthetic.” You can probably see where I’m going with this, but there’s a reason why so many structures in the style belong to governmental organizations. They tend to be schools, libraries and courthouses. The idea was to promote democracy. This took several different forms, but the most important was probably the push to play down spatial hierarchy. In opposition to most other styles of architecture, Brutalism did away with many of the distinctions between the different parts of a building. Priority was placed on shared space. This resulted in features like open courtyards and multifunction rooms that were meant to bring people together instead of separating them into categories based on rank or status. In other words, Brutalism was about manipulating the human mind. The point was to get inside your head.

The story in Control concerns an attack by a supernatural being from another dimension which the protagonist, Jesse Faden, likens to “an earworm that you can’t get out of your head.” The supernatural being in question is known as the Hiss. Breaking into its headquarters through an unstable Threshold, the Hiss tries to take over the Federal Bureau of Control by manipulating the minds of people like Jesse. The most interesting aspect of the story is how this attack by the Hiss comes through the Oldest House. This beautiful example of Brutalism is a way of getting inside your head. Similar to how the movement was seen by Peter and Alison Smithson, Brutalism in the game is depicted as a means of influencing behavior. Separating the “ethic” of this movement from the “aesthetic,” the story in Control turns the psychology behind Brutalism into something truly supernatural. The story is all about the strengths and weaknesses of the human mind.

Something about Brutalism is just a little bit bizarre. You’ll come across Brutalist buildings in quite a few games, but they find an expression in Control that really breaks new ground. Remedy interpreted Brutalism in the game as opposed to simply featuring it. Remedy had something to say about Brutalism when it created Control. The developer picked up on the supernatural aspect of Brutalism and then made use of this interpretation of the style in several different ways. You can definitely see this in the level design, but it came through quite clearly in the story, too. In other words, Remedy depicted Brutalism as an “ethic” as well as an “aesthetic.” I hope that more developers in the future will take this kind of an interest in architecture.