Kirby exists, for me, in a dark but simultaneously brightly lit and colored box, a thick ridged cartridge, the Super Nintendo with violet-purple panels, and on the TV. Kirby just has to suck up a power or an enemy, and then with the right button press he’ll cough up another character instead of manifesting a new ability and, thanks to that, my brothers and I can play together, though still taking turns between the three of us. (Wild, later, when the Nintendo Switch lets us play literally all together as Kirby and his teammates at the same time.)

It’s always a different sort of delight when we come across one of the game’s rooms with just a small selection or a whole hall of powers floating above for us to pick and choose. No need to rely on what’s available from the soft and chunky technicolor battlefield. Our oasis is an armory. Even if the rooms often signal a boss fight is next, the barest hint of character customization entranced, the feeling of finally getting to browse and shop a department of magic powers – rather than the clothing stores I remember being bored with as a kid – intrigued. They’re simultaneously prototypes and streamlined versions of today’s in-game character creators I can pour what feels like hours into. Or probably more reminiscent of the “choose your fighter” menus that I also enjoy.

For Kirby, he gets to accessorize. For his teammates, it’s pure shapeshifting. I remember often being the teammate to one of my brothers playing Kirby, which I preferred partly because of this. I liked the ability to have my character change their entire shape, swapping bodies between the likes of a brawler beetle to a snowman. 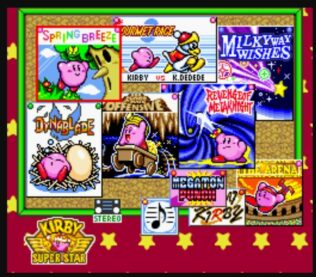 Besides the ability to play together, this Kirby title was a favorite because it contained multiple games in one. We could fight off a shiny rainbow bird and watch the credits roll, then go back to the menu and choose to face off against MetaKnight next. My hazy memory claims there were weird, obscure-feeling minigames too, like something that parodied dramatic one-strike Samurai duels. But I preferred the longer games from the menu, as did my brothers (or at least they were the ones we played the most). My favorite was the MetaKnight one because it felt darker and more exciting.

At the time, the hint of something darker in any piece of fiction I consumed would instantly grab my attention and convince me to look closer to see if it would be something I would like or pass by. That hasn’t changed, and it still happens to this day (for example, I love Gravity Falls and the dark places it explores). Then and today, I was doubly interested when it was something even a little dark shadowing any cuddly-coded fiction. The contrast of sharp edges poking and grasping at soft curves has always sparked my imagination.

So, the MetaKnight one felt darker. I remember there were the visuals, with something other than pastel colors that normally populated the other Kirby games on the cartridge – a luridly red sky, with the feel of the sun just burning on the horizon and through the pixelated clouds as it started its slow descent. Besides that, there’s my brothers and I barreling through the guts of gray and bronze machinery as we invaded the massive ship. It’s that one Kirby stage in the Super Smash Bros. series except it’s really Meta Knight’s – and really, this is the source of it, with the fighting game arena offering a slice that honors a whole game.

But it’s a little more than visuals that add a darker cloud. This game out of several in one cartridge ultimately follows Kirby and any allies he creates while they raid MetaKnight’s hulking steampunk-esque airship. There’s rapid-fire text box dialogue among the baddies that I recall as being played straight and seriously throughout the campaign. When their dialogue scrolls across the screen, they speak in alarm as Kirby and his ally systematically bounce from one crackling smoking area of the ship to the next, gradually tearing through it piece by piece. Kirby’s less cuddly and more a genuine threat from their perspective opposite him. They acknowledge his power.

And then in contrast with all the other Kirby games on the cartridge, it ends on a countdown. Much like MetaKnight himself, his ship’s had it by the end of the big boss fight, and it’s about to explode. Me or one of my brothers has to become Wheelie, an obviously named and simply adorable sentient cyclops wheel, and ferry Kirby to safety while looking equally adorable in the sudden donning of a helmet with ear flaps and goggles. Kirby’s looks are always on point, even when outrunning exploding airships. 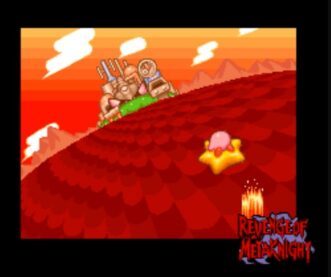 I don’t think my brothers and I ever tried testing to see what would happen if we stayed put and didn’t immediately move to escape the destruction of MetaKnight’s ship. I remember responding to the game’s cues well, how everything seemed to narrow down to only the countdown and the sirens, tension actually ramped up. The fact that Wheelie was something the game automatically gave to you, instead of letting you create Wheelie like your other companions, quietly spoke to the gravity of the situation. I think the biggest factor that made this game a favorite on the Kirby anthology cartridge for me was the final race to escape. I always looked forward to the finale when gameplay dramatically changed into the only race against time out of the entire campaign. And normally I’m not into any sort of racing in a game. But this one with a cute pink round thing riding another cute round thing was an absurdly interesting exception. It also helped that it was hard to mess up.

As with many things I can finally name when I look them up on the internet years after I’ve known them, it feels a little weird. The game I fondly recall is Kirby Super Star. My favorite on it was Revenge of MetaKnight. There was indeed a Samurai Kirby minigame. It feels doubly weird because the box art is very familiar when I see it online and confined inside a border on a white page, but I never remembered what the text said. It feels triply weird because the text also includes marketing that’s very clear and concise – 8 GAMES IN ONE! Exactly. Precisely. Genius. Provided a lot of fun with my brothers.

It is quadruply weird because, for me, it’s still . . . just Kirby. It’s the Kirby game for me. More than that, it’s Kirby the character for me. Less one game out of many, but the game, and the character. Kirby exists here in this particular boxy cartridge for me. I’ve dabbled with some other Kirby titles, but this slumbers cozy on a cloud in my mind. Cliche or just simply true, this old title holds the most sway with me. 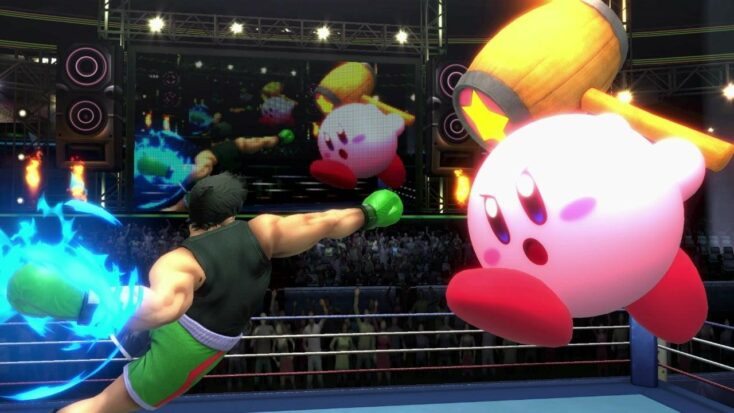 For the most part. Kirby also exists in the space between when he jumps straight up into the sky with an opponent in hand and when he slams back down in that same straight line with a pleasant impact and the satisfaction of an attack that landed. Kirby exists on the arenas of Super Smash Bros. for me too. If there is such a thing as a perfect move in a fighting game, Kirby’s “up throw” is one of them for me, if only on a visceral level. It’s been said that self-expression can be part of fighting games, and this move still feels very Kirby despite the shift from pastel platformer to crossover slugfest. Kirby is flighty and light and gravity-defying – why not just jump straight up and then slam straight back down in a perfect line? Gravity’s always been a plaything for the eldritch but benign puffball that is Kirby.

From classic to fighter, from 2D to 3D, Kirby jumps the line and inhabits and exists in both spaces. He’s soft with the barest hint of edges, especially when he can sometimes change into a literal rock to crush his enemies.