I was never a Nintendo kid. I had a Gameboy, which I loved. Link’s Awakening is still the best Legend of Zelda game in my eyes. The handheld was my only consistent entry point into the Nintendo world; I never owned any of their home consoles. Back in 1996, I knew I had to get a PlayStation, but Nintendo doesn’t make games that just pass you by if you’re in this space.

I was playing the newest Super Smash Bros on the Switch a couple of weeks ago for the first time and I wasn’t prepared for how nostalgic it made me feel. I had only ever played the original on the Nintendo 64 over at a friend’s house. We’d pull two tall backed dining room chairs up in front of their large screen and ensconce ourselves in the Smash, undisturbed by adults for hours on end. 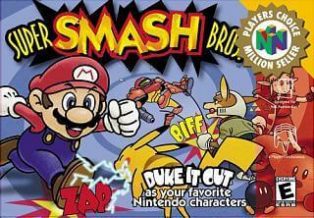 That was the beginning and end of my Super Smash Bros career. Fast forward to now and you’d find me in my living room, giving my flatmate (who also happens to be someone for who Nintendo passed them by) a rudimentary explanation on the intricacies of Smash Bro combat. “It’s the same!” I yelled at the screen. “It’s the same game!”

I honestly don’t know how Nintendo does it. I know for a fact that mechanics and controls have obviously been tightened and refined over the game’s iterations since Smash 64. We don’t have to suffer the N64 controller anymore (anyone who defends that thing is more nostalgia addled that I am),  but in my mind, the Switch game plays the same as it did back in the early 2000s. For my first match, I selected my old main and childhood pal Kirby (Kirby is objectively Nintendo’s greatest character. Fight me.) and that was that. After two minutes of adjustment, the old muscle memory kicked in and I was swinging a mallet around with gusto.

I hadn’t thought about that old friend of mine and all those sunny Spanish afternoons spent away from the sweltering sun for years. Mastering Pikachu’s anti-air game or a team of Samus-powered Kirbies fighting back high-level AI opponents. I was able to recall the scene with startling clarity. The tangle of wires at our feet and the terrace door opening onto a distant view of the sea and into a world of sunburn and sweat.

In my mind, Nintendo is only second to Disney when it comes to pure brand power. They have a roster of classic characters and a number of successful series that’d make any entertainment entity salivate. This is the work of carefully curated work over decades that can’t be replicated overnight. Who else remembers PlayStation All-Stars Battle Royale, with its lineup of memorable characters like Killzone Dude and Spider-man villain reject Cole Electric Hands? Anyone?

It’s that nostalgia that gets you. It’s warm and inviting, but it’s got you in a stranglehold. Nintendo are well aware of what they’ve got and they’ll tighten that grip, leaving you gasping and begging for more. I don’t own a Switch yet, but I plan to eventually. I was quite excited when they announced that Link’s Awakening was getting a full-on remake. It’s like they had a list of people who still weren’t giving them money, saw my name and went “I know just the thing to hook this sucker.” Nintendo games already retail for a higher price than your average game and they never come down. £50 for a remake of a game from 1993 does give you pause for thought, because £50 for a game is a ludicrous amount of money whichever way you spin it. It doesn’t matter. I already know it’ll likely be one of my first Switch purchases, because Nintendo is too damn good at their own game.