A few weeks ago, everyone I follow on Twitter got Elden Ring fever. Every second tweet, interspersed with news about Ukraine and “spotting misinformation” listicles, was about someone buying or trying to buy or waiting to receive the presumed Game of the Year. As a perpetual Souls trier without much patience, whose curiosity about the games has always run up against the various messy realities of playing them, I knew I wasn’t the ideal candidate for this new release, but nevertheless I was a little jealous. Although I’ve accumulated three FromSoftware games, the only one that runs on my computer is Dark Souls 2, also the black sheep of the franchise, generally held to be more difficult and more deliberately unfriendly than other games in the series. However, it was either this or nothing, and as I debated watching Twitch clips for a game I hope to get to play sometime this decade, I started up its eight-year-old predecessor and tried my best to dive into it.

I mention my reasons for starting DS2 to make it clear that they were not pure: I was not playing the game for its own sake, but because it was there and I had the capacity to play it. It was not that I wanted to be challenged or immiserated, but that I wanted a vibe – achievement and precision, in the distinctive format that has become so familiar over the last eleven-plus years: die, lose your souls, retrieve, repeat, succeed. I’ve written before about the ways I’ve used challenge to compensate for a lack of control in other areas of my life, but now, over a year on from writing that, I feel sucked dry – even little hurdles make me crumple like a plastic bag being demolished by a windy day. I am not, it’s clear, in the ideal mental state to be playing what’s often held to be the most hostile game in a notoriously hostile series. I am also starting from scratch: while one of my favorite games, Hollow Knight, is a Souls-like that requires death and practice to succeed, it’s also a 2D metroidvania that doesn’t require attention to things like camera position, dodging in a three-dimensional space and internet strangers who can pop into your game to destroy you.

Still, I started up DS2 and after a few minutes spent on the menu screen I decided to avoid restarting with a new character and instead continued with my dual-wielding swordswoman, who when I opened the save file was facing me, helmetless, her gaunt face staring out at me like a grim plea: please don’t make me do this again. 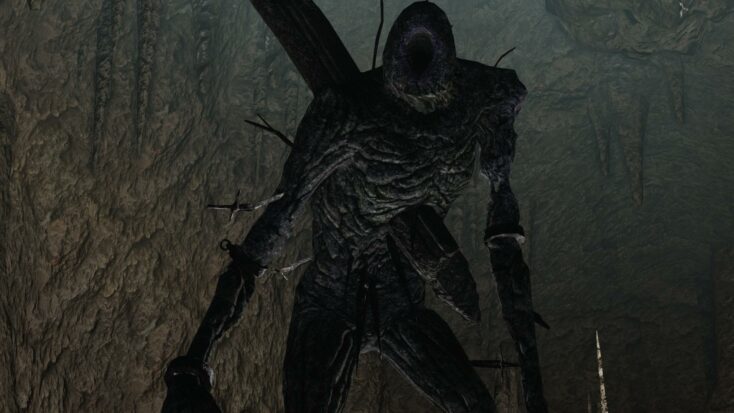 This is when I remembered where I was. A year ago, when I started Dark Souls 2 for the first time, I got through the first area and to the first boss, the Last Giant, a tall tree-like monster with a hole for a face. This is also when I remembered the mechanic that made me quit this game in the first place. Each time you die in DS2, a portion of your overall health bar gets taken away, with a maximum penalty of 50%. This is called being hollowed; every death brings you farther from the full scope of your humanity, and that process is reflected mechanically by a reduction in your health pool. You can do various things to replenish it to normal, but the items that do this are limited, especially early on. What this means in practice is that you can easily get to a point where after you’ve confronted a boss thirty or forty times, you’re now hacking at its legs, applying all you’ve learned in those hours of play, until it kills you with one hit.

This is where I was. My past actions had accumulated, and I could see them laid out for me on the screen. My health bar, whittled down to 50%, and even more notably my hollowed, greenish face with its strange white eyes. I had died, and Dark Souls 2 remembered it. It brought me back, but with consequences.

Since then, I’ve had a few a-ha moments: I restarted and got a shield, I put more points into adaptability and I figured out how weapon upgrades work. But the biggest turning point for me was the realization that Dark Souls 2 is deeply interested in making you notice your own memory. Its areas are designed with lots of visual flair, from the sparks flying off the burning top of Heide’s Tower to the white spots of moss on forested castle walls. There are a million things to stop and take notice of, but few opportunities to do so. Often, it was only when I’d run through an area ten or fifteen times, and finally gotten all the enemies to de-spawn, that I could finally stop and take a beat, look around, and notice the tiny details that surrounded me.

In a way that seems totally counterintuitive for a game where you can’t pause and where there are notorious gaggles of enemies, Dark Souls 2 has forced me to slow down and really see what’s around me. I could close my eyes and describe to you the route over the ramparts of the Lost Bastille, where I died probably 50 times to a bunch of titanium-clad soldiers. I could tell you exactly what the inside of the Cardinal Tower looks like, the place I’ve huddled so many times before venturing back out into the deadly forest around it. This has been said many times before, in many different ways, but this series – and in particular, this game – rewards death in the same breath that it punishes you for it.

A number of other critics have defended Dark Souls 2 – that its challenge is in service of the experience as a whole, not to antagonize the player. More recently others (including fellow columnist Julie Muncy on Twitter)  have pointed out that Elden Ring, described as the most approachable Souls game for a new player, is also a spiritual sequel to Dark Souls 2. While I’m a new convert to the game myself, I can’t be more overjoyed with the news. I’m excited to make it there someday, but for now I’m still sitting in Majula, taking a breath.

Harder Core Than Thou