In the second chapter of Sally Rooney’s novel Beautiful World, Where Are You, one of the four main characters writes a letter to another. As all these letters will be, this one is tied up in the question of labor and entitlement: what does it mean to be a citizen in Ireland, a novelist making 200,000 euro a year and to have some awareness of that position’s privilege? Alice, said novelist, writes about a visit to a grocery store in the small town she has moved to, where “I suddenly had the strangest sensation . . . I thought of all the rest of the human population [who] have never seen or entered such a shop . . . All the various brands of soft drinks in plastic bottles and all the pre-packaged lunch deals . . . all the back breaking work on coffee farms and sugar plantations. All for this!” For Alice and the other characters in Rooney’s novel, self-awareness is a kind of stagnant curse: it makes you aware of the suffering behind the products you use, but in the end the material result is the same. As Alice says several lines later, “In case you’re worrying about me, buy lunch I did.”

Later on, we learn that Alice’s love interest, Felix, contributes to one of the chains of production the letter doesn’t mention: he works in a warehouse. The class difference between the two provides a conflict that stretches throughout the novel, providing mostly surface-level disagreement and occasional more serious clashes over social norms, educational level and literacy. Work, in this novel’s view, whether spectated or experienced, is not only the opposite of fun but a recentralization of one’s life from human relationships to physical products, a source of depression for Alice and of physical risk for Felix.

This category distinction of work as a dissatisfying relationship to physical things is one that Wilmot’s Warehouse, a puzzle game originally released in 2019, both recognizes and turns on its head. You play as a square named Wilmot who receives, processes, organizes and delivers items in an expanding warehouse. Given the history of the commercial warehouse as a space, it might be surprising that WW is able to retain its cute status at all, but it does so by eliminating two things from its setting: utility and suffering. The items you receive are requested by the customers you serve, but they are not used. In some cases, it’s difficult to imagine how they could be used – it’s more useful to think of them as taxonomic categories rather than objects. My warehouse has three levels of meaning – identifiable things (for example, office supplies), shapes and others – the things that might technically be a shape or an item, but for which I’d struggle to think of a name or a utility. This fluid categorization means I struggle not to forget how I have categorized something, as an orange or a circle, or maybe a circular eraser, and when I lose the meaning I lose my momentum entirely. In other words, like the nightmare Wally’s Supermarket in Alexandra Kleeman’s You Too Can Have a Body Like Mine, which changes its layout each night to confuse its customers, the organization is the aggravation and the point.

To the game’s additional elimination of any negative conditions that exist in a warehouse in reality, I would submit, following the lead of work on games as labor, including work on WW from this very website, that it is able to do so because it shows a work environment where needs, including relaxation, nourishment and sociality, are met. On the other hand, it is useful to note – as a demonstrative example that it can only remove itself so far – that googling “Wilmot’s Warehouse labor” brings up a few reviews, one or two promotional articles and, then, in the fourth or fifth result, “Package Handler – Wilmot, NH, $18/hour.” 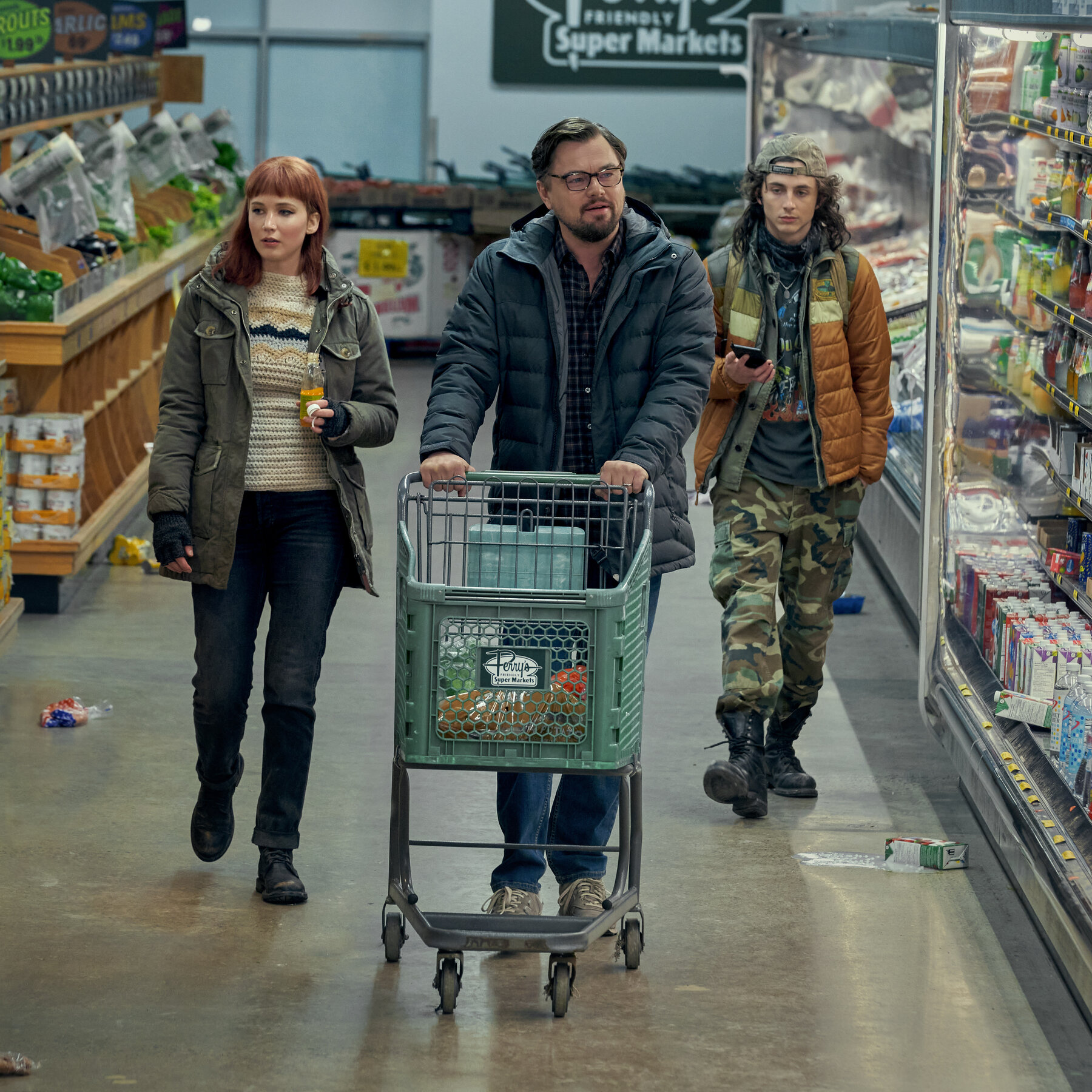 Another place I see the same complicated relationship to physical products is recent streaming release Don’t Look Up, which portrays an Earth put in jeopardy by the approach of a world-ending comet. Emblematic of this, on the one hand, is a White House staffer’s late paean to stuff; on the other, Leonardo DiCaprio’s quiet realization, holding hands with his wife, that “we really did have everything.” Though it refers at least partly to his family and friends, the comment also gestures at their material surroundings. The dinner on their plates comes from a mostly empty grocery store, where, earlier, several characters compare different brands of salmon. This matter is both incredibly, vitally important and symbolically empty. It is what will be left and it is also, in the comet’s view, and in the film’s, interchangeable with everything else that is there. If things, roses, fingerling potatoes, enable connection, reflection, release, are they more or less important than what they make and can they even be separated from it?

All three of these works share mainstream appeal, and also a certain degree of usefulness as comfort media with a current of unease about that category. All three use the grocery store, or its supply-chain predecessor the warehouse, as a vehicle for a mixture of wonder and other feelings – wonder mixed with a knowledge of privilege, an absence of consequence, and a doomed wish that these products, prepared correctly, can provide a solution to an unsolvable loss. All three push back on the idea that products are enough, sometimes quite forcefully, but in the end, they can’t help but return to them and invest them, hesitantly, with meaning.

Whether that investment is revelatory or navel-gazey is certainly a point for debate. All of these works have come under criticism, the film and novel for being too heavy-handed with their central messages, and the game for gamifying a job whose real-world conditions are frequently inhumane. All three of these criticisms can, and have, been themselves criticized – as taking these works too seriously, not giving their messaging enough credit or reading ill intent into something meant to provide pleasure, not objectivity. For my part, I enjoyed all three of them and found meaning in them – and at the same time, all of them made me question whether works of art, or at least these particular manifestations of art, have much power at all to enact meaningful results.

This question is, in part, what I want to use this space to explore. In this column, I want to examine the portrayal and affect of objects in and over time – what lingers, recomposes and remains when everything else has moved on. But maybe the simplest way to put it is to say that I want to continue to do what I hope I have done here – draw some disparate things together and see what sticks. Thank you for reading.

Beautiful World Where Are You, Don’t Look Up, Wilmot's Warehouse