I’m always surprised how long and wordy comics tend to be. Behemoths like Blankets (592 pages), Berlin (580 pages) or even House of X / Powers of X (448 pages) are impressive and intimidating. All three sit on my shelf, unread, due to a lack of time and a fear of commitment.

I find myself with less and less free time these days, and sitting down with a 500 plus page comic causes more anxiety than joy.

That’s why I’ve been seeking out shorter comics. And when it comes to short, complete comics, the indie section is king. Recently, I finally got the chance to read a selection of comics from ShortBox, a quarterly mail-order comic box turned indie publisher. With a growing catalog of over 20 comics, I checked out a few standouts and found some amazing stories that not only respected my time but made strong impressions in just a couple of pages. 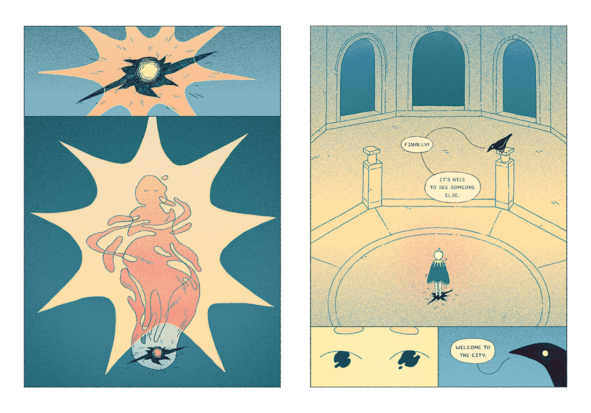 Clocking in at 40 small-sized pages, Interim is the story of a star (in the shape of a human) and a talking crow trapped in an empty, repeating, maze-like city. Neither knows how they got there. Neither knows how to escape. But together, they are determined to try to find a way out, no matter how long it takes.

The timeless, deathless, almost fractal-like city of Interim acts as the central narrative force that the star-human and crow explore, both literally, as they wander its landscape, and figuratively, as they converse about the nature of their existence within its space.

Like much of the ShortBox catalog, the art in Interim does a fantastic job of both creating a mood and telling the story. Chan’s art style creates a timeless, liminal quality to the story, with a faded, fading, grainy quality to all of the artwork. My much-smarter-than-me artist friend likened Chan’s style to that of 1980s Risograph printing, which naturally printed in that rougher, grainy texture.

The only critique I can level at Interim is that, for a story about navigating through a winding and treacherous cityscape, the depictions of physical movement often came across a bit stiff. (One could argue that more lively movement would take away from the static nature of the space and story, however.) But Interim’s strong sense of space and mood, achieved in 40 small pages, is worth experiencing. 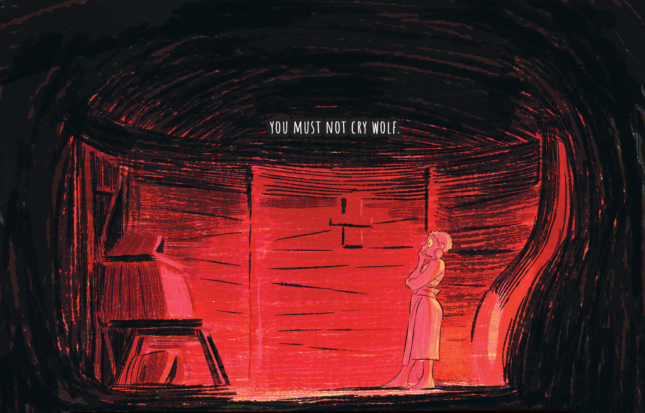 A spin on “The Boy Who Cried Wolf” fable, the Ignatz award-winning Cry Wolf Girl is a rapid dive into fear, paranoia, unease and doubt. It does still deal with the core tenet of the original story, but with a unique, more sympathetic and more personal angle. Dawa, a young girl in an isolated village, has lost her mother to sickness and is haunted by the feeling of wolves stalking her. Her mother raised her not to cry wolf and Dawa desperately wants to abide by her teachings, but with continually rising paranoia and anxiety, Dawa is caught in a battle between her own instincts and the beliefs of her mother, her friends and the wary village elders.

Ries incredible art is what really makes Cry Wolf Girl. Everything, from the foreboding red and black color palette to the violent, jagged, creeping, uneven linework makes Cry Wolf Girl incredibly tense and puts the reader in Dawa shoes masterfully. Dawa’s internal struggle showcases a painful, powerful depiction of the need to believe others, or at least offer them help. In a way, Cry Wolf Girl is a rebuttal to “The Boy Who Cried Wolf,” both in its depiction of Dawa’s downward spiral and in the story’s ultimate conclusion.

A tense, psychological horror in 48 pages.

The most striking thing about Joe Sparrow’s Homunculus is that the entire book is drawn from a fixed perspective: the unmoving viewpoint of a stationary, 1,100-pound cube-shaped AI named Daisy. Created by an engineer named Veronica Sayeed, Homunculus is their story: how Veronica created Daisy, Veronica raising Daisy like a child and Daisy’s ultimate purpose.

The singular, unmoving viewpoint Sparrow has created isn’t a gimmick; he works with and takes full advantage of the unique perspective. The panel layout reflects this, with each and every page consisting solely of three long horizontal panels taken from Daisy’s perspective. Another way Sparrow utilizes and expresses this fixed, machine viewpoint is through time; sometimes the space between panels represents a few seconds, sometimes it represents a much longer period of time. Especially with repeated readings, you start to notice Sparrow’s use of environmental storytelling, like how Veronica’s office changes between select panels. This only becomes more prominent, and more visible, as the story continues.

Sparrow’s excellent framing pushed me past any gripes I may have had about his art style. Homunculus is a moving and touching story about love, knowledge, life, death and time. Saying more would only lead to spoilers.